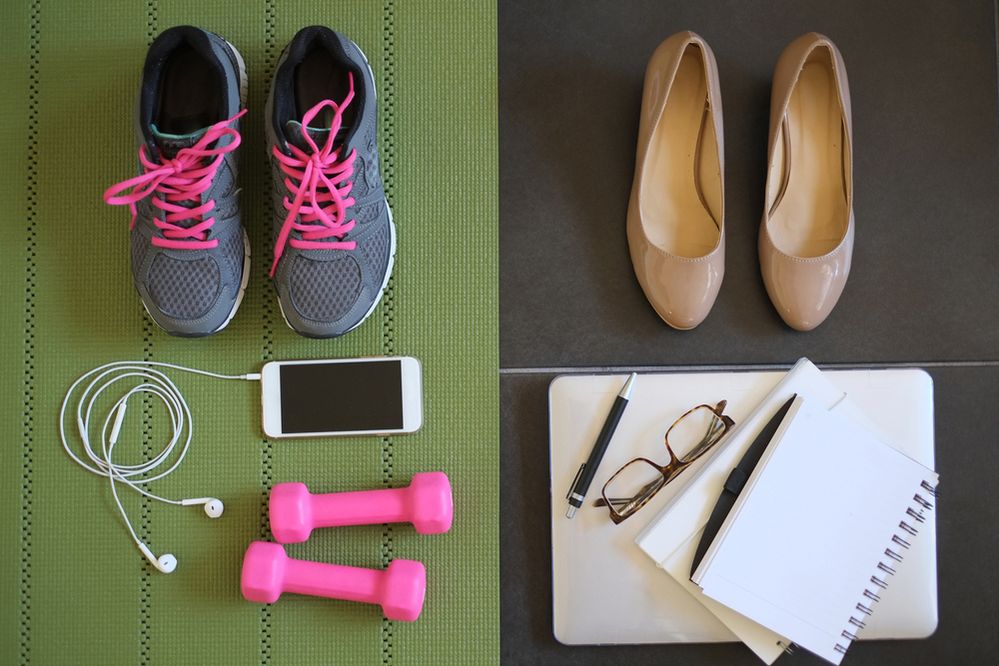 For an entrepreneur, the line between work and non-work (also known as “life”) is often quite blurry. Where does work end when you are your own boss? And where does life begin when you and your business are inextricably intertwined? When you work for yourself, finding a work/life balance that protects and preserves your financial health as well as your mental, physical and emotional health can be as tricky as staying upright on a tightrope. Yet, every day, countless people opt to work for themselves. When it comes to getting the most out of both work and life, do the benefits of entrepreneurship outweigh the drawbacks? Intuit decided to find out.

The company recently conducted a survey of 1,000 self-employed people on the topic of work/life balance. Some of those surveyed (56%) were wholly self-employed, while the rest were also working either part- or full-time jobs in addition to being self-employed. Let’s find out what they had to say!

Stop! Before you read any further, take a guess at the following question (we’ll reveal the answer shortly). Do you think:

A) entrepreneurs are happier than salaried workers even though they work long hours?

B) entrepreneurs are less happy than salaried workers because they work long hours?

You’ll find the answer in #3 below!

Key finding #1: For many, self-employment is good news for your work-life balance 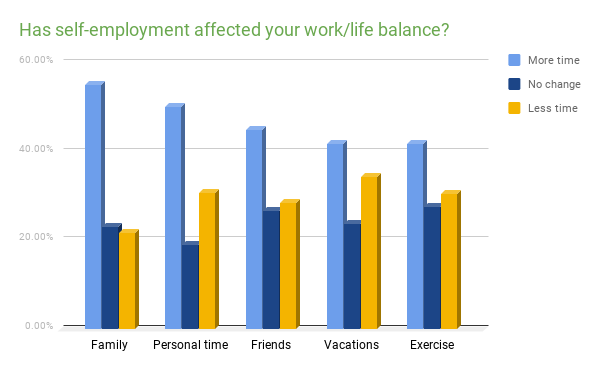 One of the biggest benefits of being self-employed is the extra time you’ll have for yourself and your family. More than half (55%) of survey participants report having more time for the former, while 50% have more time for the latter. You’re also more likely than not to have more time to see friends, get some exercise and take vacations. That’s despite the fact that, as we’ll see, many entrepreneurs end up working longer hours.

Key finding #2: Despite longer hours for some, self-employment is generally good news for your health, happiness and income 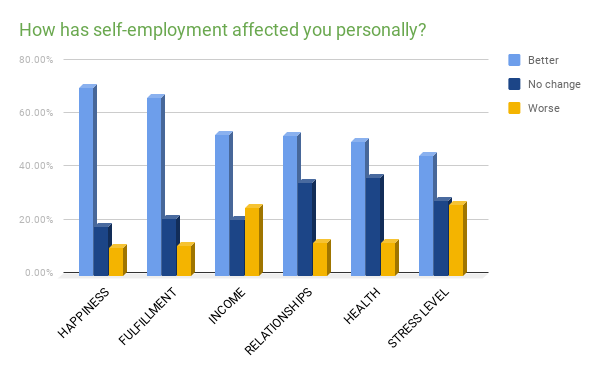 What did you guess up above? A or B? If you chose A, you are correct! More than two-thirds of the respondents (70%) say they are happier being self-employed, and almost the same number (67%) say they feel more fulfilled. More than half (53%) are earning more money. The positive impact on people’s stress levels is more subtle, but 45% say they are under less stress than before. However, more than 1 in 4 (27%) say their stress levels have risen and a similar number (26%) say their income has dropped since they became self-employed. 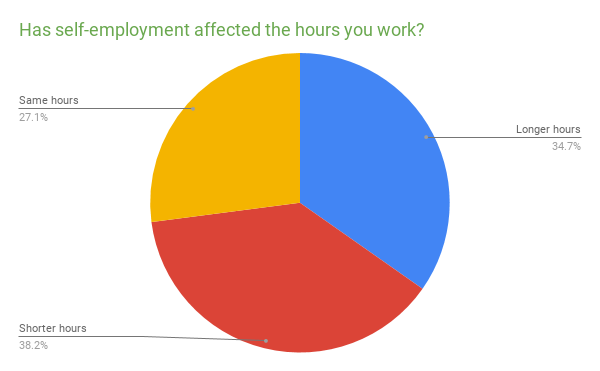 Although roughly a third say they work longer hours than they did before they became self-employed, a slightly higher proportion (38%) say they actually work fewer hours.

People working longer hours also reported earning more income now than when they worked for someone else. They have a greater sense of fulfilment and lower levels of stress. On the other hand, people working shorter hours reported better personal relationships and higher levels of happiness.

Key finding #4: At the end of the day, work is still, well, work 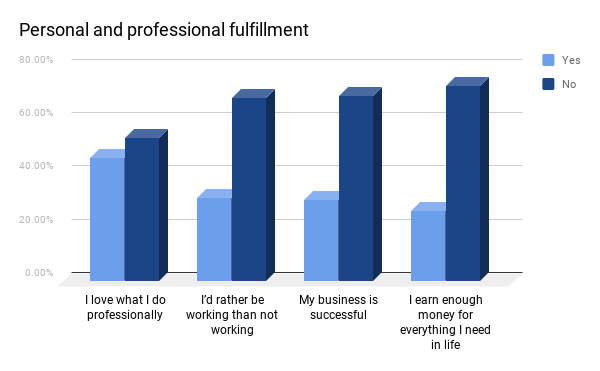 Many people choose self-employment because it gives them more control over their daily schedule. That reason and many others -- passion, drive, family business, new opportunities and so on -- makes the idea of being your own boss incredibly appealing. However, as the chart above makes clear, the reality of working for yourself doesn’t always match your dream of what it’s like to be self employed. No wonder most entrepreneurs (69%) would ditch the “work” thing altogether if they could swing it financially. Hey, we get it -- self-employed folks are only human!

Key finding #5: You have to make personal sacrifices when you are self-employed 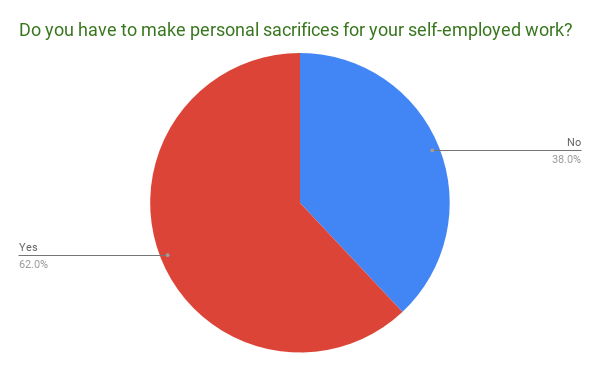 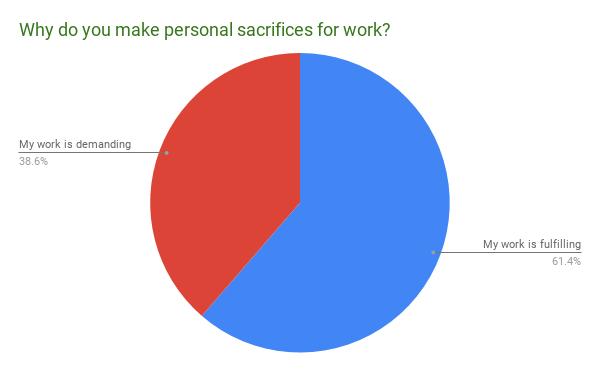 Almost two-thirds of respondents (62%) admit they have made personal sacrifices for their work, but most are happy to do so. In fact, despite making sacrifices, more than 61% do it because their work is fundamentally fulfilling.

Key finding #6: Self-employment is rewarding but may not last a lifetime 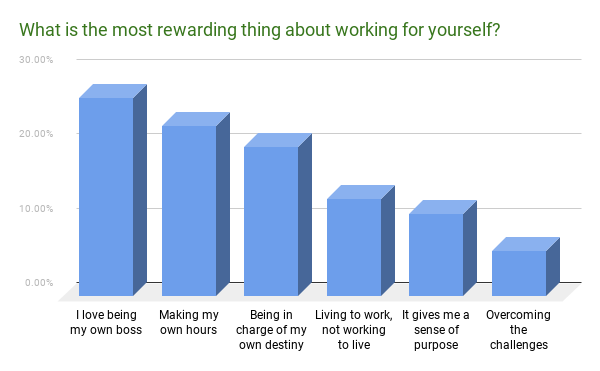 It’s worth acknowledging, however, that 70% of those surveyed said they would trade in all the perks of self-employment if it came down to making more money, getting a better job or making a change for family reasons.

With that in mind, as well as all the other fascinating, obvious, surprising and occasionally contradictory findings in this new report, we feel compelled to say kudos, once again, to anyone who dares to work for themselves. No one ever said self-employment is easy, but, for countless dedicated, driven, passionate entrepreneurs, at the end of each and every long hard day, it’s worth it.

QB Community members: Do these survey results resonate with you? How would you answer these questions? 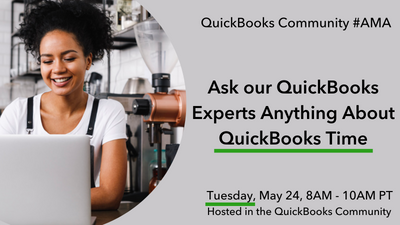