BACKING YOU: Desiree Wood Is One Real Mother Trucker 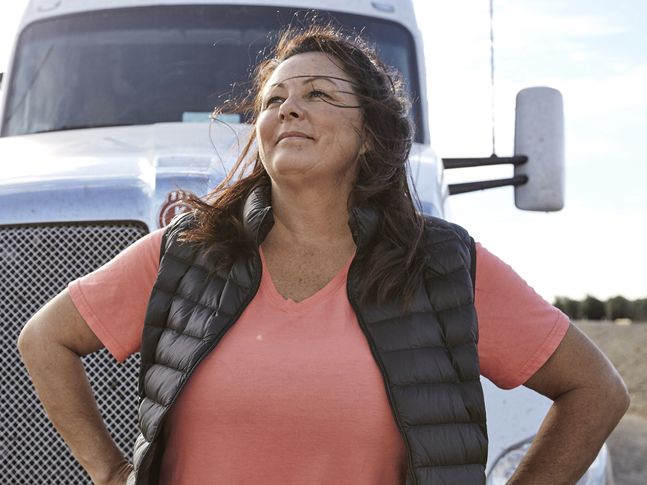 Business: Trucker (owner/operator) and founder of Real Women in Trucking

Founded: Driving and advocating since 2007

When Desiree Wood started training to become a professional truck driver, her goal was simple: The single mom of two grown kids (and grandma to six) wanted to work hard and make a solid, dependable living. Desiree was homeless when she set out to earn her Commercial Driver’s License (CDL), and she was more than willing to spend both her days and her nights inside an 18-wheeler.

Imagine her dismay, then, when she discovered her chosen industry was rife with problems. Deeply concerned about everything from unsafe training standards, anti-trucker legislation and widespread hostility toward female drivers, Desiree turned her anger into action. Since 2007, she has launched Real Women in Trucking to give information and support to female truckers, created a series of video tutorials for beginning and seasoned women drivers and has built a strong Twitter following, too. Desiree’s personal story and professional insights even sparked a four-part news report by Dan Rather about national trucking safety practices. We spoke with Desiree about her role as a determined advocate and as a dedicated “mother trucker.”

Desiree, what’s it like to spend so much time on the road?

When I started as a driver ten years ago, I’d be out for three months at a time. My truck really was my home. For the first year, I had a route that wouldn’t let me go further west than Texas, so I hardly saw my kids in California. It was tough.

Now that I own and operate my own truck, I’ve got a lot more freedom. I like to stay out for about ten days at a time to make sure I’m earning enough to take care of my truck and still make a profit. Then I like to get home to Lake Worth, Florida. By that time, I’m ready to sleep in my own bed, ride my bike, maybe put on a dress.

Trucking suits me because I’m very independent. I like working by myself, and I’ve always thrived in that kind of environment. 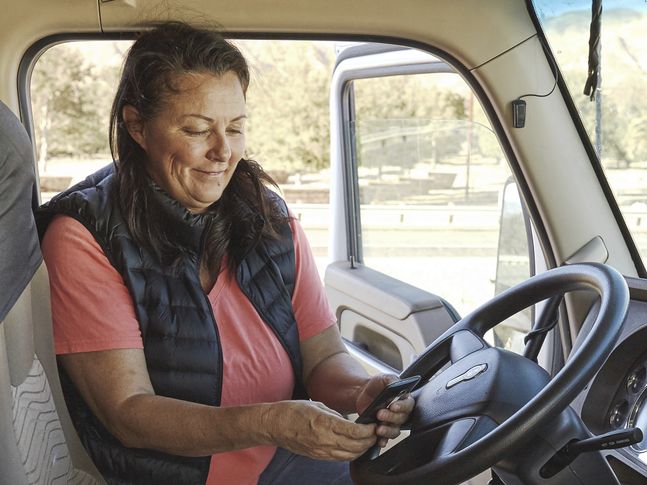 Tell us about living in a truck.

I’ve got bunk beds, a small fridge, a closet and a miniature crockpot. I have a desk that folds out and a computer, plus an auxiliary power unit so I can have air conditioning or heat without idling the engine.

And the bathroom is …

A big plastic pitcher! I’ve also got plenty of trash liners – I need to have emergency supplies of everything in case I get sick or stuck in a snowstorm.

You know, lots of places with public restrooms won’t let truck drivers use the bathroom. That was an eye-opener. Here we are, working hard, practically living like animals so we can deliver all the things people want and use every day – phones, computers, paper towels, you name it – and we can’t use a public toilet. It’s unbelievable.

Is that one of the things you’re trying to change through your advocacy efforts?

The issue certainly comes up. For me, the main priorities are the unsafe training practices and the sexual misconduct in truck carriers. I’m also concerned about the lack of unity in our industry when it comes to female drivers. My goal is to encourage women to stick together and help each other out.

A lot of women truckers get into the business because of their husband or their dad. If you’re a single woman like me, there’s no one to take you through the learning process. Wandering around a truck stop alone at night, looking for help getting your tandem wheels unstuck? Not a good plan. It’s so important to have someone you can trust.

When I first started driving, I thought other female drivers would say, “Right on, sister!” Instead, I was attacked for asking questions and sharing my concerns. I was stalked online. I even got death threats. Now I’ve got a reputation for giving it right back, so that kind of stuff doesn’t happen as much anymore. 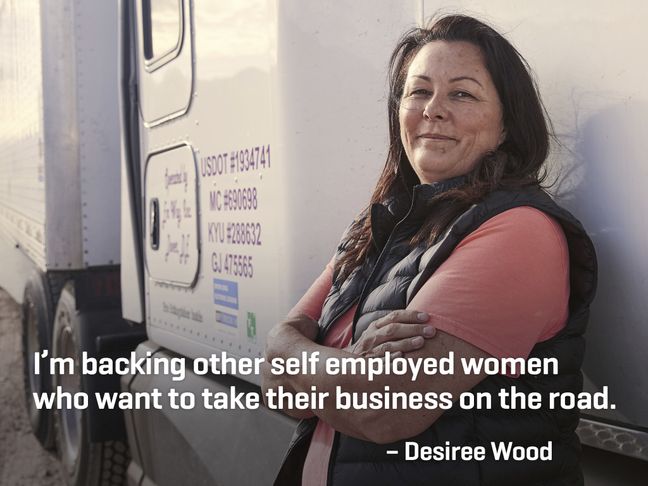 Have you always thought of yourself as an advocate?

Honestly, I never intended to be doing this on top of driving. I just wanted to work hard and make decent money. But when I saw how big the problems were in this industry, I realized I had nothing to lose by putting myself out there.

I want to encourage other women to advocate for themselves, because that’s what I ended up doing. I hope people will start trying to fix a problem, not just sit back and let things be done to them.

One more question: Is parking an 18-wheeler the hardest part of your job?

It’s one of them! I’ve been parking a 75-foot truck for ten years, and it’s still a struggle from time to time. The biggest challenge is staying calm. Believe me, when a woman pulls up to a warehouse, everyone has to pull out their lawn chair and watch you park. You can’t ask anyone to do it for you – and you definitely can’t give up.

There are so many inspiring small businesses in the world … check out these other stories and videos from the QuickBooks 2018 BACKING YOU campaign.

BACKING YOU: Scott Beylik Grows His Family Farm and His Family Legacy

BACKING YOU: Gregg Miele Built His Gym with Real Heart – and Non-Stop Hustle

BACKING YOU: At 13, Singer-Songwriter Willa Amai Steps into the Spotlight – and Shines Bright

BACKING YOU VIDEO: The world's largest workforce works for themselves. We work for them.

BACKING YOU VIDEO: QuickBooks Backs Willa Amai and Others Who Work to Make Her Beautiful Sound

Join our QB Community and read more inspiring stories like these. Here are five reasons to join right now!

Great article. Desiree, I am rooting for you! I especially like the part of "Now I've got a reputation of giving it right back...” once you are able to confidently put bullies and naysayers in their place they disappear. Any industry a woman chose to work is her choice and she should absolutely be respected and supported for the choice that she has made.

My sister was a driver for many years, and she loved / hated the life.  I miss her stories and appreciate the attitude of "I can do it!", and many others.  Thanks for your story.

When I was a kid, our family was on the road a lot. I loved watching the trucks go by and constantly wondered what it was like to spend your life constantly on the move. The "freedom" seemed romantic in certain ways, and an absolute challenge in others.

But, as with any career, if you are driven by a purpose, you find ways to make your work meaningful. No pun intended. Desiree is doing real on-the-ground advocacy work and filling some enormous shoes. It's awesome.

I am so inspired to see Desiree not just succeeding in a male-dominated industry but also making the time and effort to "put herself out there" in support of others. I think she's being a bit modest saying she had nothing to lose! Choosing advocacy over acquiesence involves taking chances. Well done, Desiree.

I agree 100% with EmilyC, it's so inspiring to see Desiree not only making a living and succeeding at it, but working to ensure that others have the support they need as well.   We need more advocates in the world.

This story brought back one of my favorite memories. Many years ago, I hitched a ride in an 18-wheeler. During a six-hour drive, I was lucky enough to visit the trucker's favorite diner and hear all about his life on the road. I had so many questions! The most impressive moment: The driver dropped me off at my front door, which happened to be on a *tiny* dead-end street. I watched, awestruck, as he proceeded to BACK his huge truck all the way out to the main road -- and make it look easy.  Incredible!

@jodivin, that is a great attitude indeed :). I am curious to hear about your sister's stories. Any that might add shed light on Desiree's mission?

My new favorite thing to say: Mother Trucker. Desiree is an inspiration! What an amazing story. Thank you for all of the advocating and mentoring you do. We all must pay it forward.

Great to read about Desiree making a difference in a tough inviroment.  The issue of sexual misconduct in carriers certainly extends to practices on the road.  An organization doing a great work among truckers to combat a sector of this misconduct is Truckers Against Trafficking.   They seek to raise awareness and stop the sex traffiking trade, specifically within the trucking industry.  I have been aware of thier work for a few years, and I am impressed with thier impact.

I love this quote and it should be on a poster: "Honestly, I never intended to be doing this on top of driving. I just wanted to work hard and make decent money. But when I saw how big the problems were in this industry, I realized I had nothing to lose by putting myself out there. I want to encourage other women to advocate for themselves, because that’s what I ended up doing. I hope people will start trying to fix a problem, not just sit back and let things be done to them."  Go Desiree!!

Go Above and Beyond
Welcome back to the Business Discussion Board! I have a quick question for ...
Read more