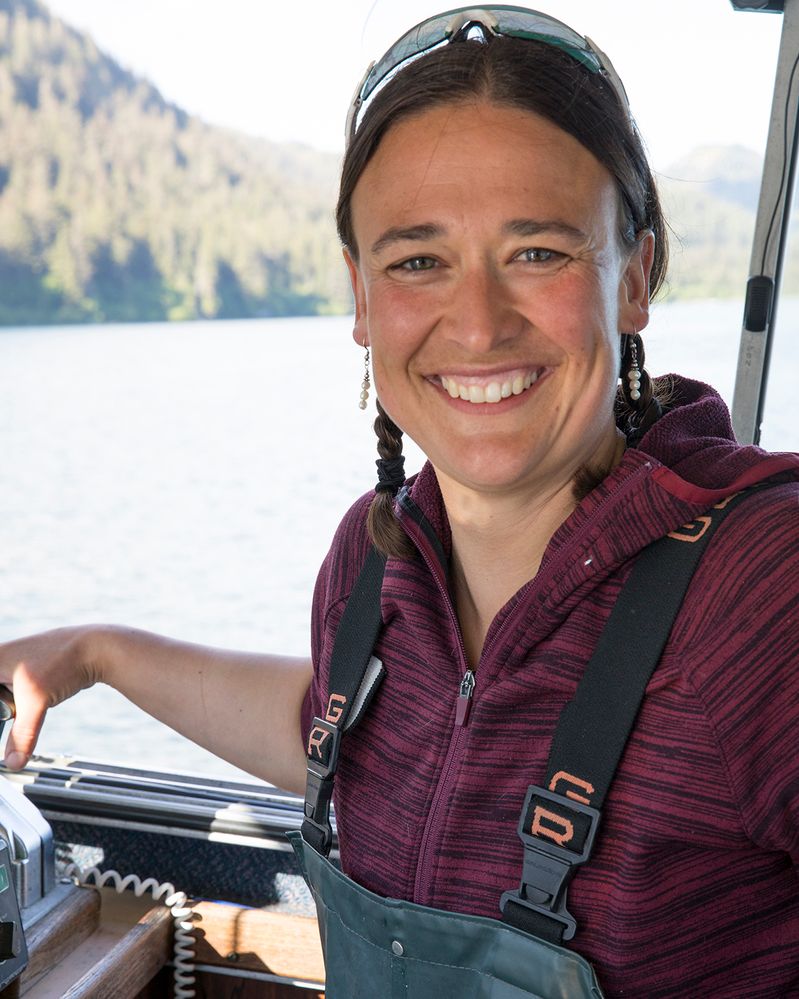 Captain Megan Corazza grew up commercial fishing with her parents out of their home port of Homer, Alaska. From a young age she learned firsthand about the high stakes and unpredictability of the fishing business, and she swore she’d never go down that path herself. In fact, she was on track to be a doctor when the fishing business beckoned her, and she decided to follow in her family’s footsteps.

Today, Megan has owned her own commercial fishing operation for nearly 20 years. Each summer in the Land of the Midnight Sun Megan, along with her crew and her sons, catch millions of salmon to sell to canneries. The days are long and sleep is short, but this seasonal business allows Megan to pursue her other passions -- motherhood, writing and skiing -- during other eight months of the year.

We caught up with Megan just before she headed out for a summer at sea to learn how she balances fish, family and finances from one unpredictable season to the next.

Megan, what did you do before you worked for yourself as a fishing captain?

I fished throughout my entire youth. My mom was the original fisherman in our family. She hired my dad as a crewmember, and they started fishing together, either running separate boats or working together on the same boat. My brother and I were raised on a crowded fishing vessel called a seiner. It was our family of four plus three additional crew members, which made for tight quarters!

I also worked two summers on another skipper’s boat during college. I was going to Whitman College at the time, majoring in Asian Studies and completing my pre-med requirements. I was planning on a career in international service medicine. I completed the application process, interviewed at Georgetown University and was waitlisted. Ultimately, I didn't make it in. I decided not to reapply for a variety of reasons, although sometimes I still want to.

What is it that you do as a commercial fishing boat captain?

I’m the captain or “skipper” of a “purse seiner” fishing vessel. We use a net that is approximately a quarter mile long and drops 80 feet deep to surround the fish. Then we “purse up” or cinch-close the bottom of the net with one long line.

We fish primarily for pink salmon, a high-volume fishery. We spend three months a year on the water, and during that time, we catch one to two million pounds of fish. Every day we deliver our fish to a larger vessel called a tender, which takes the fish to the processing plants in a port. We use a lot of the same tenders you see on the show The Deadliest Catch. Tell me about how and why you decided to work for yourself?

After seeing the immense amount of stress my parents experienced as commercial fishermen, I never wanted to be a skipper. The financial stakes are high in this business, and there are a thousand variables like weather, mechanical breakdowns and managing crew personalities that made it too challenging for me to consider.

Then, during college, I worked for a skipper who was only 27 years old. I was totally inspired that he could run the operation at such a young age. I told my family I was interested in buying my own boat, and they helped me find an operation I could afford.

How did you get your business up and running?

When you start out as a skipper you invest in a net, a skiff, a boat and a fishing permit. You buy a permit one time, and then you renew it every year for around $700 dollars. It’s a bit like getting a liquor license. When I bought in, the permits were selling for $20,000. Now they are worth around $150,000. The permits are operated on a limited-entry system, so there are only 266 permits available to seine where I fish in Prince William Sound.

To afford everything I needed to start up, I got a loan through a private bank, and my father put his own fishing boat up for collateral. I was very nervous about this and did not like the pressure, so I made large payments for three years. Then I refinanced with the State of Alaska using my permit and existing equity as collateral, so my parent's boat was no longer at risk. I bought-in at the bottom of the market in 2000 when fish were worth very little per pound. Permit prices were low, and my first boat was also very affordable.

Have you scaled up your operation since starting out? And do you anticipate growing your business in the years to come?

I originally bought a 48-foot seiner. I fished it for seven years and then purchased a 52-foot seiner with a much larger engine room and more bunk space for crew. It also has a “tophouse,” which is an enclosure on the top of the boat that I can drive inside and stay warm. I have chosen not to do any other fisheries -- or fish other species -- with my boat because I love skiing in the winter and spring. So far, my plan has worked out.

My boat is now paid off. I appreciate not being under the financial strain many of my friends with new boats struggle with, but I’m definitely on the search for a larger vessel so I can pack more fish. For now, though, I’m content with having less financial stress because of the smaller volume of fish my boat can carry.

Who else fishes with you?

I hire three crew members each season to help bring in the net and maintain the boat. I have a nanny on board to look after my youngest son, who is seven. Both he and his 16-year-old brother work with me most of the summer. My father and brother also have their own boats, and we all work together on the same radio channel to help each other find fish and fix mechanical issues. 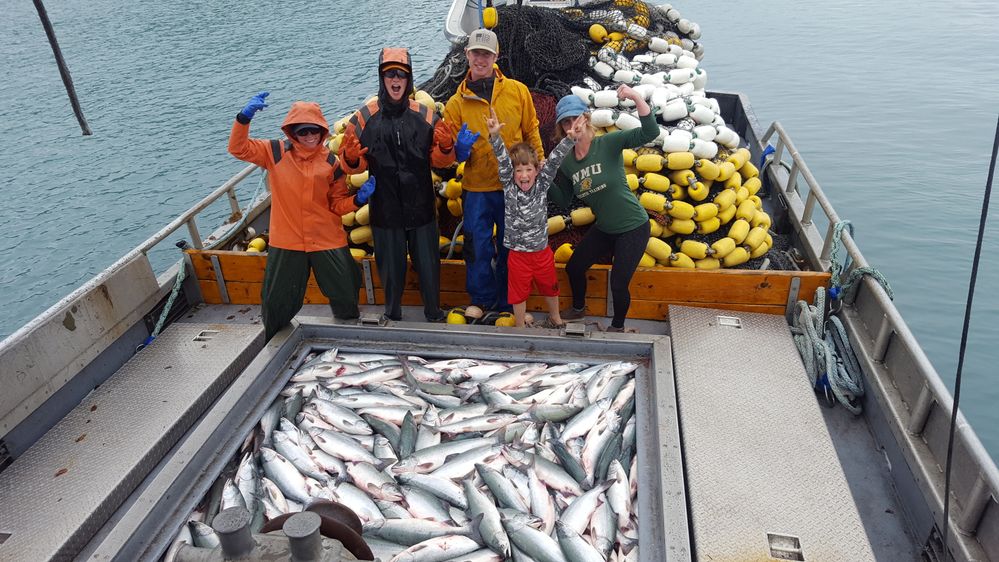 The crew, including Megan’s sons, posing with a completely full hold of fish

What do you love the most about your work?

I love bringing my sons along with me and raising them in a working environment on the ocean. My crew members are artists, athletes, cooks -- and hard workers. They are all amazing role models for my boys.

What does a “typical” work day look like for you during fishing season?

I get up around 3:30 or 4 a.m., do routine engine-room checks and start my two main engines. Then I start my generator and turn on my refrigerated sea water system which chills water in the fishhold so my fish stay cool during the day. I wake up the crew, and the day begins.

When we fish we make “sets,” meaning we put the net out, hold it in the water for about 20 minutes and then close the net together and haul it back on board. We typically make between ten and 15 sets a day. At the end of the day, or whenever we fill up our fishhold, we pull up to a large tender. The tender sucks the fish out of the hold with a giant vacuum pump. Then we clean the fishhold, tidy up the deck, set the anchor and collapse into bed between 11 p.m. and midnight. Sleep is a very precious commodity during the fishing season!

That sounds exhausting! You do that every day for three months?

Every year is different. Some years are remarkably exhausting and nonstop, while other years we get a lot of rest. We always want more opportunities to fish, however, so we don't mind the exhaustion.

How do you balance the seasonality and unpredictability of your business from season to season?

Fishing is definitely a seasonal business and one that depends both on market conditions and the return of salmon to the ocean. Some years are lucrative, and some are very poor. On the big years, when you receive all your profits in a lump sum from the cannery in September, you have to spend very carefully, knowing that the following year or two could be extremely poor.

The seasonality of this business means you have to be very careful with your yearly budgeting. Because of the fluctuating and unpredictable nature of fishing, I have learned to buy things like cars and property all at once rather than taking loans out on them.

What happens when the season is over and you have eight months until the next season?

The most relaxing time of year is when the season is over. We hunt and travel and relax. Then, during the winter, we catch up with paperwork and pay attention to the politics surrounding commercial fishing in Alaska. Boat work begins in earnest as the weather warms up in April. We leave the harbor to start the season in late May.

I don't work much in the off-season, which is about eight months of the year. I occasionally freelance for magazines and newspapers, and I volunteer at my son’s school and with different ski coaching programs around the state of Alaska. I really value that I can work in the summer and be a full-time stay-at-home mom during the rest of the year. 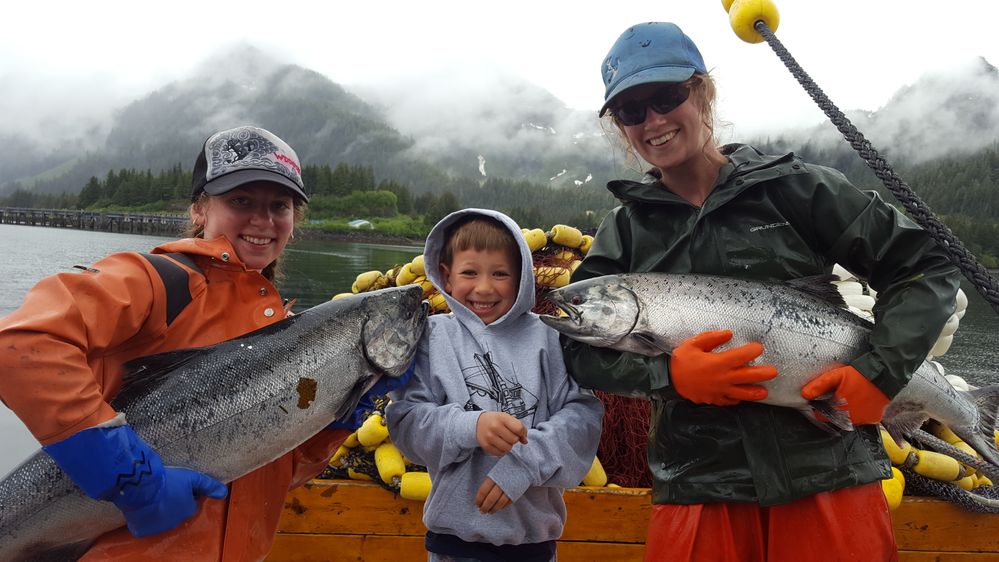 Two of Megan’s crewmembers and her son, Fischer, aboard the F/V Centurion

What is your best advice for entrepreneurs striving to make it past the two, three, and five-year anniversaries of their businesses?

I think you just have to accept that it takes about seven years to truly start making money in a business. Live below your means and put money into a savings account or invest in property. Most importantly -- be a good boss. Keeping great people on your team is key to having a successful business. Don't treat them like a tool that can be replaced. My people are essential for me to run this seine operation.

Tell us one more thing we haven’t yet asked about!

I never took a business course in all my time at school. No matter what you think you will do with your life, take at least one business or accounting course!

QB Community members, how do you deal with an unpredictable market and other variables in your business?

Want to weigh in but not yet a QB Community member? No problem. Click HERE to sign up in a flash!

"Be a good boss. Keeping great people on your team is key to having a successful business."

Great advice - and I think I might take it even though I don't have any employees! I work for myself, and for me being a good boss means remembering to take care of myself once in a while. Taking little breaks, going for a quick walk around the block. Being kind and understanding of failure, as long as lessons are learned. We can all strive to be better bosses in that regard :smileyhappy:

Community Chatter: Odd ways to save money
It's almost like clockwork - every few months when we are discussing topics...
Read more

Twitter Spaces: Agent Office hours - QuickBooks Online
Welcome to the new Twitter Spaces where our agents will be answering your q...
Read more

Track your spending: Manage your expenses, bills, and vendors
This is a Zoom webinar, you must sign up on Zoom to register. Follow this l...
Read more