How can I just see one quantity adjustment entry? If I sold 3 bottles one day and I would have simply entered -3 as a quantity adjustment for the product. But when I look at the report, I see two negative 3s and 1 positive 3. I have no idea why it would show such a thing. How do I make the report just show what I entered? See: https://cdn.shopify.com/s/files/1/0109/1230/1156/products/xxxxxxxxxxxxx@xx.xxx Thanks! Christine
Labels:
0
Cheer
Reply Join the conversation
3 Comments 3

I'm glad to see you posting here in QuickBooks Community to let me provide information and address your concern.

The quantity adjustment you've entered will reflect the same details on the report. As you sold 3 bottles one day and entered -3 as a quantity, it will show the same when you run the report. 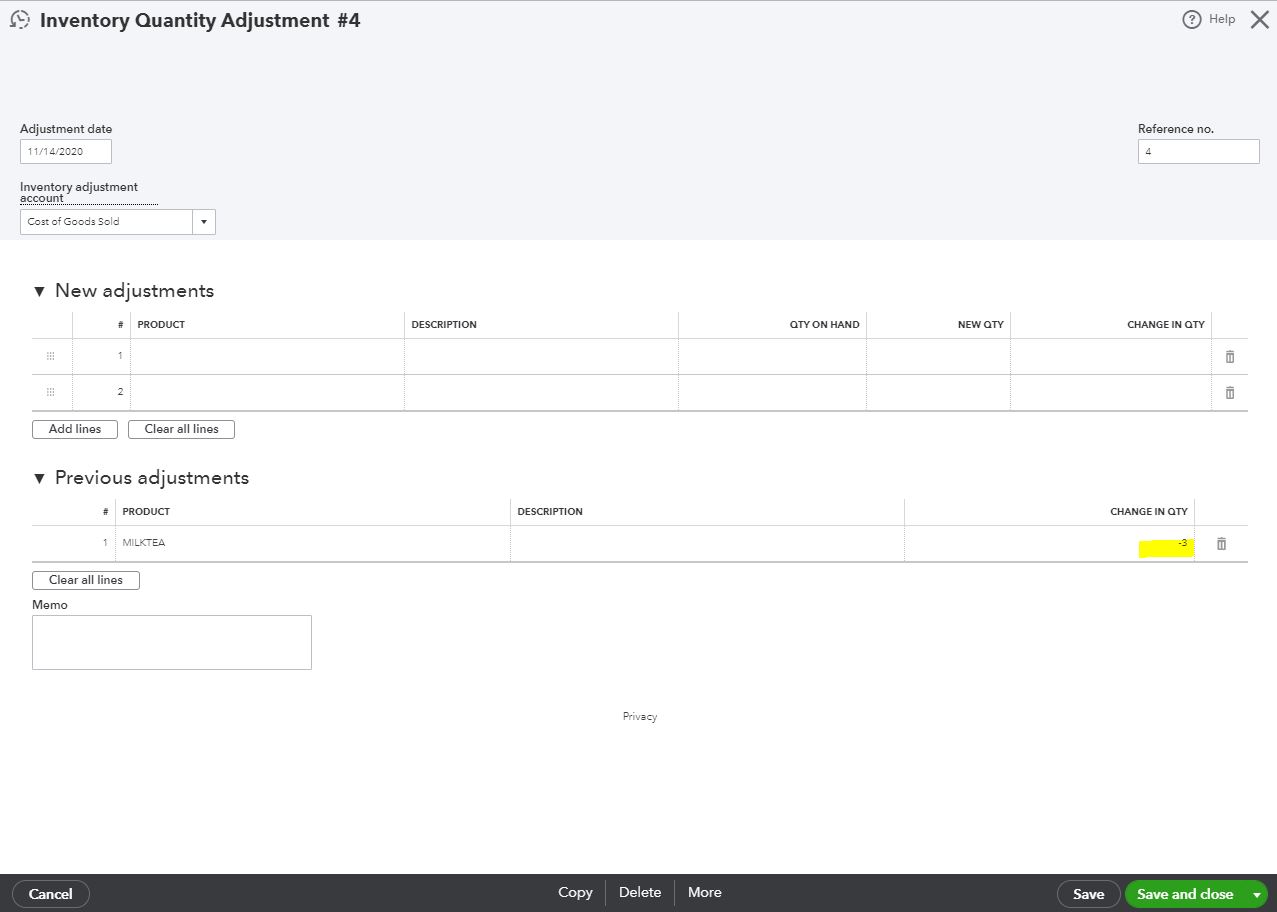 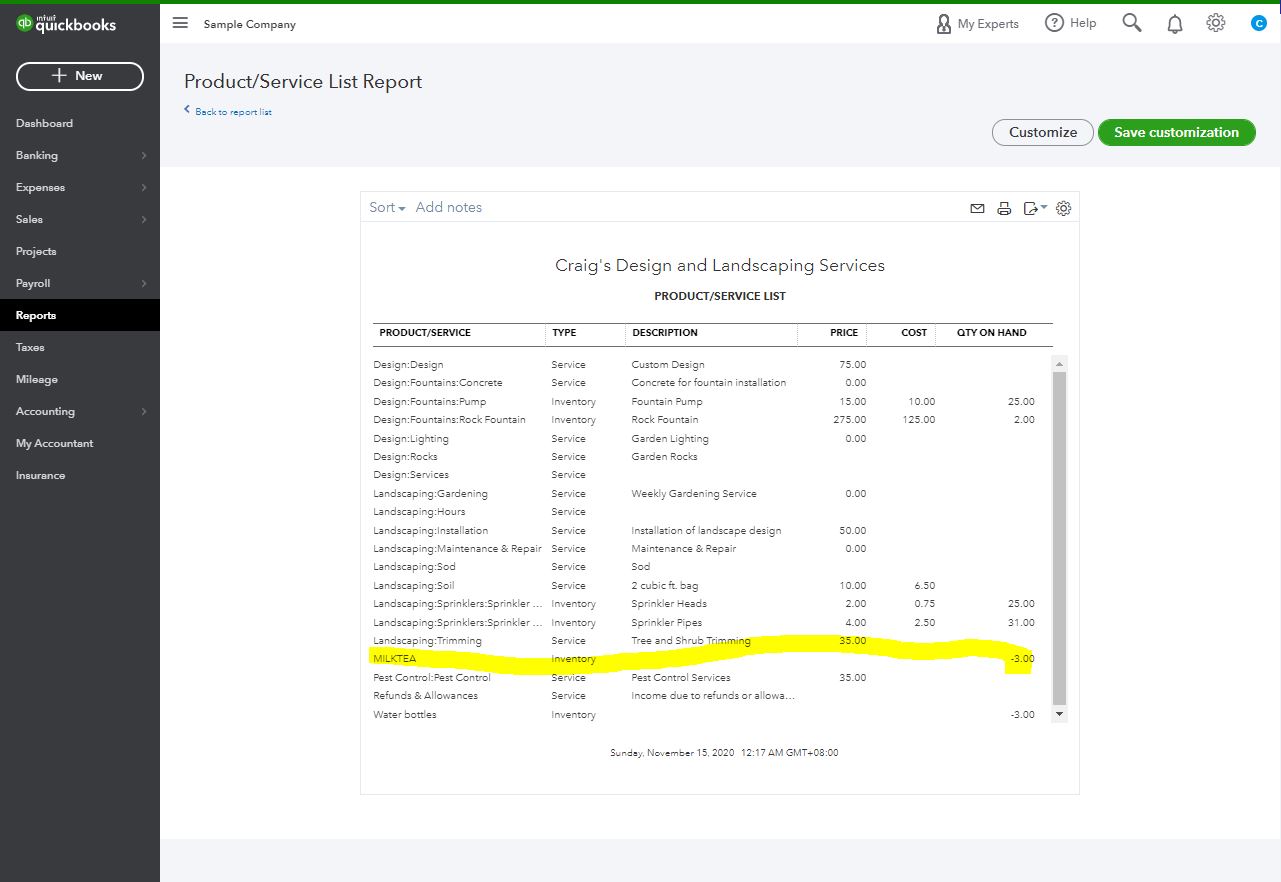 Since you see two negative 3s and 1 positive 3, I'd recommend clicking each entry to see the full details. With this, you can review them and delete if needed so you're able to see one quantity adjustment entry in the report.

If the issue persists, I'd suggest deleting and recreating the Inventory adjustment you've created to update it. 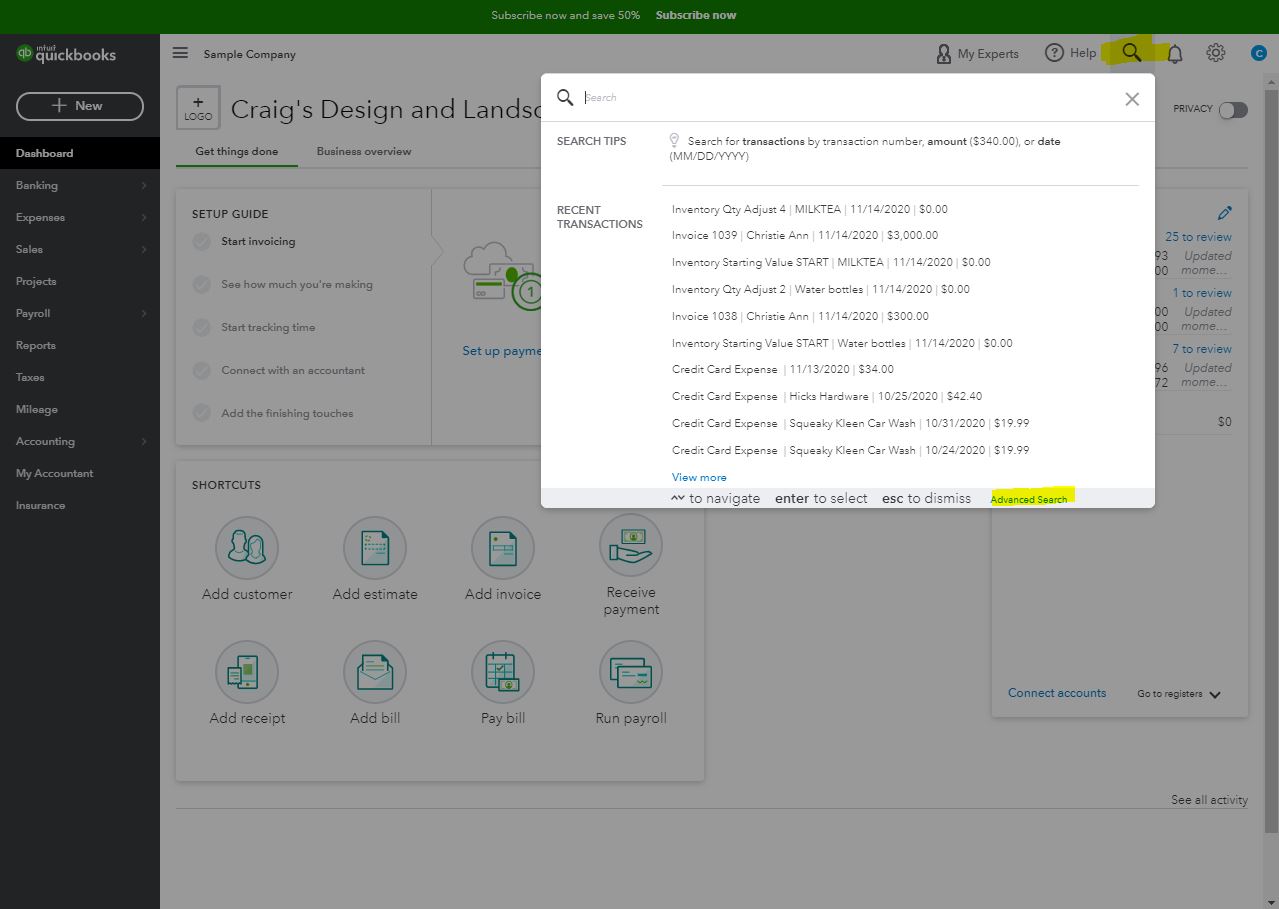 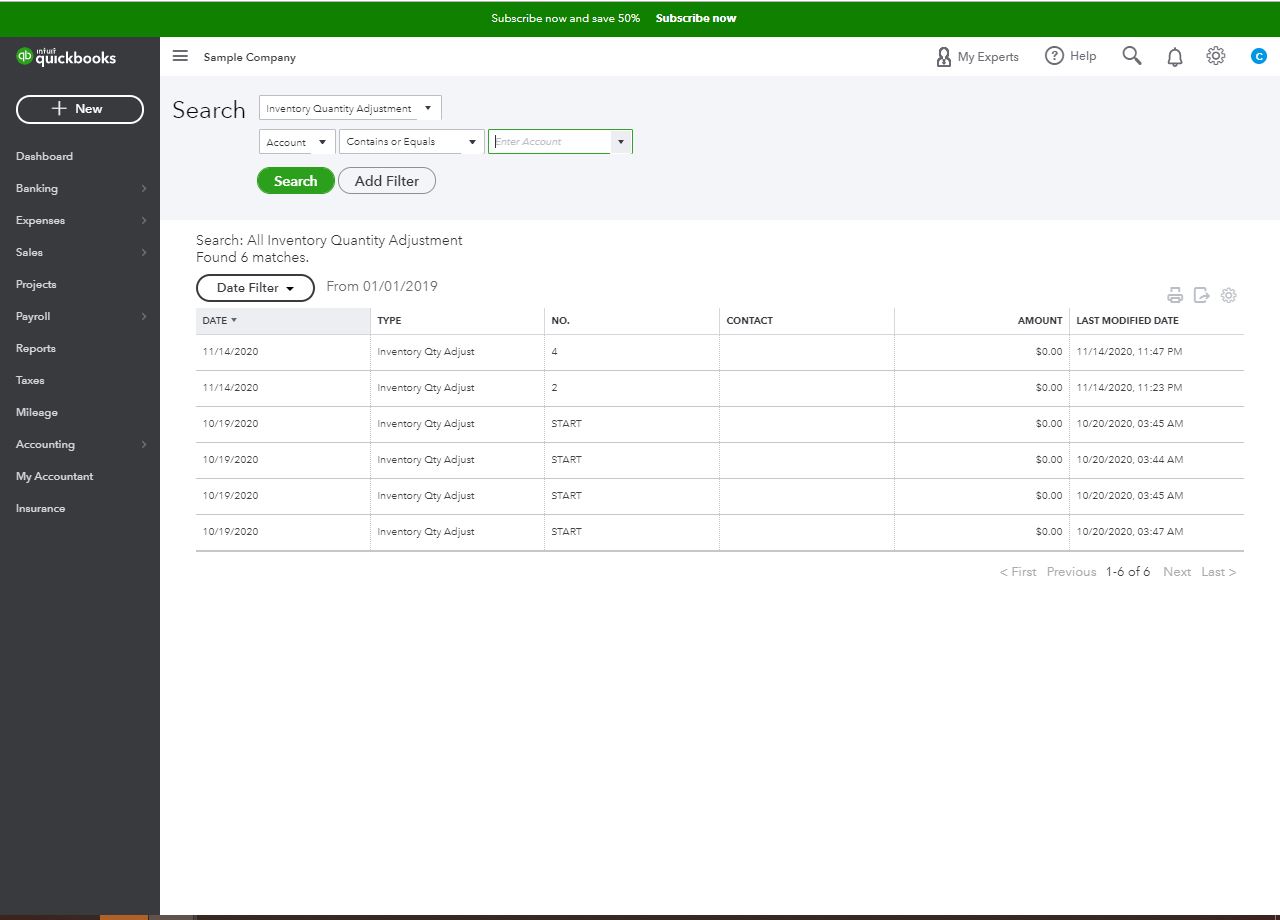 Once done, click this article to see the detailed steps on how to recreate the inventory adjustment in QuickBooks: How to create an inventory adjustment. Then, go to the Products and Services tab again to check if you've got the correct adjustments and run the report again.

Please let me know if you have more queries about managing your inventories or anything else related to QuickBooks. I'll be here to lend a hand. Take care and stay safe always.

Thank you for your reply, but I don't think you understand the problem. The inventory adjustments themselves are fine. It's just that when I view a report, it shows each adjustment three times with positive and negative numbers even though I only made a single negative adjustment. (I'm trying to see a simple list of the quantity adjustments by day, but it's displaying three lines for a single quantity adjustment.) And I'm afraid the post corrupted my link to my photo, so I just figured out that I can paste it: For a single entry, say, entry number 1535, it shows three lines of data in the report. One has -3, one has positive 3, then another -3. There is only one entry: 1535 for -3, but it shows three lines in the report. It makes it difficult to see daily sales because I have to look through and visually pick out a single negative from the three lines, where two of the lines (as far as I'm concerned) shouldn't be there at all. In the case where I have a return and put three back into inventory (+3), I'd have two positives and one negative. So being able to see which days are positive and which are negative would be a very difficult task.

(FYI, You see rates of $0 because I use QB to track inventory quantities, not costs.)

If I delete the entry and make it again, it will just do the same thing, and it always has. I've got entries almost every day for two years, so deleting and remaking every single entry wouldn't be possible anyway. I've just been getting really tired of looking at it this way and wonder if there's another report feature I've been missing to make it show the entries properly.

I can share some more information about the data on a product quick report, @ArtanisHome,

When you run a report in the Products and Services page, it will give you the details of each entry for a selected item. This means that. the posting accounts from the transaction journal will reflect there.

There are specific accounts that is affected by the quantity adjustment. This includes, Inventory Asset, Inventory Shrinkage and Cost of Goods Sold. This is the reason why you will see multiple entries there for a single adjustment.

Refer to the screenshots for reference: 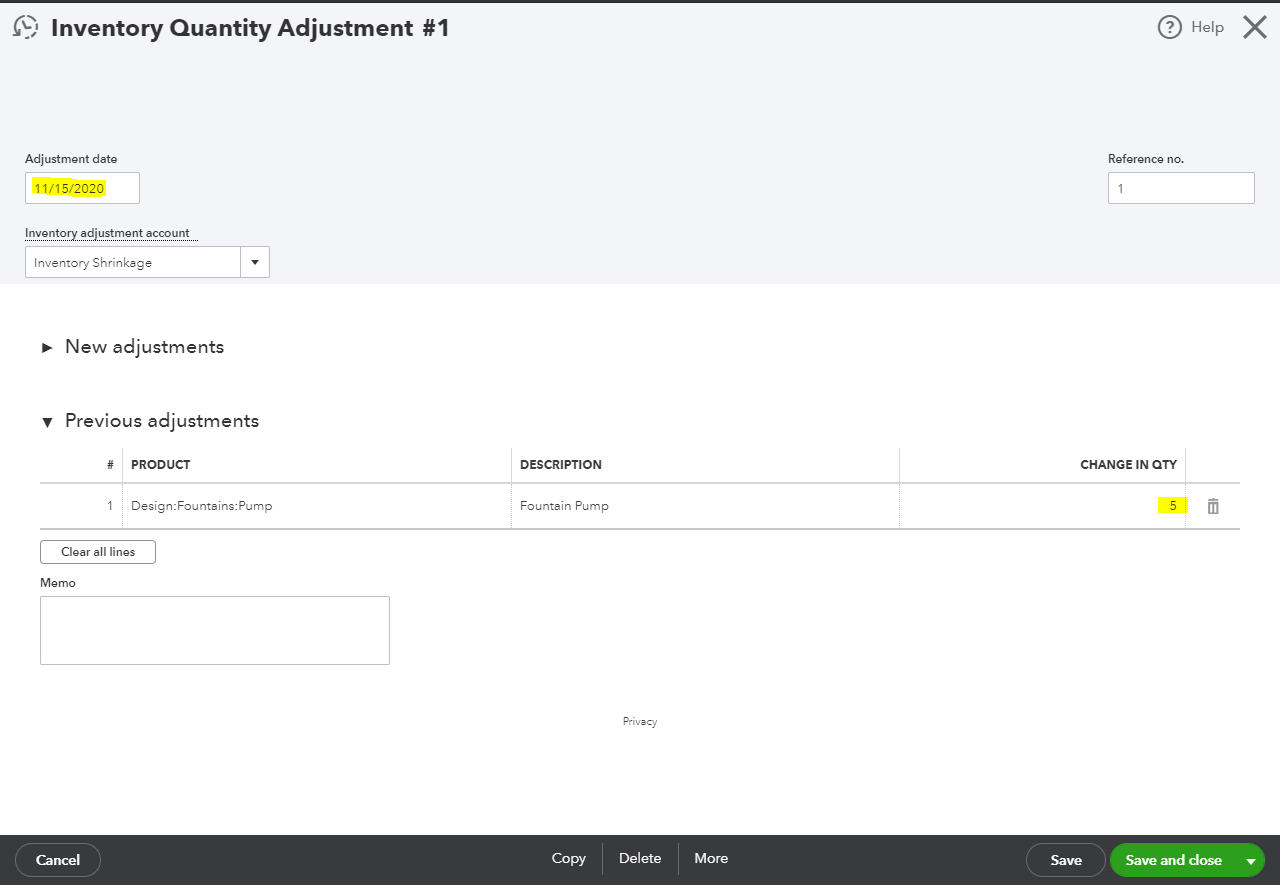 2. How it looks on the report: 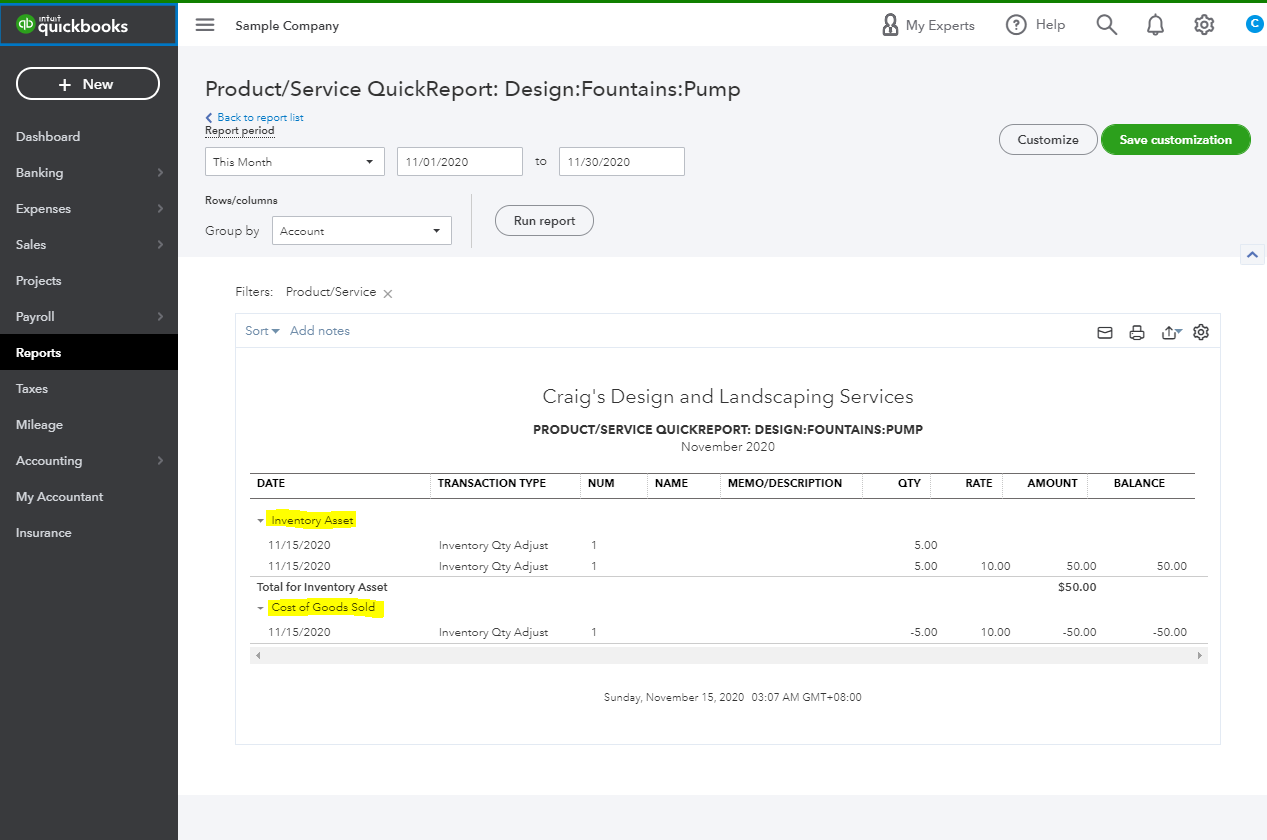 3. Transaction Journal of the entry: 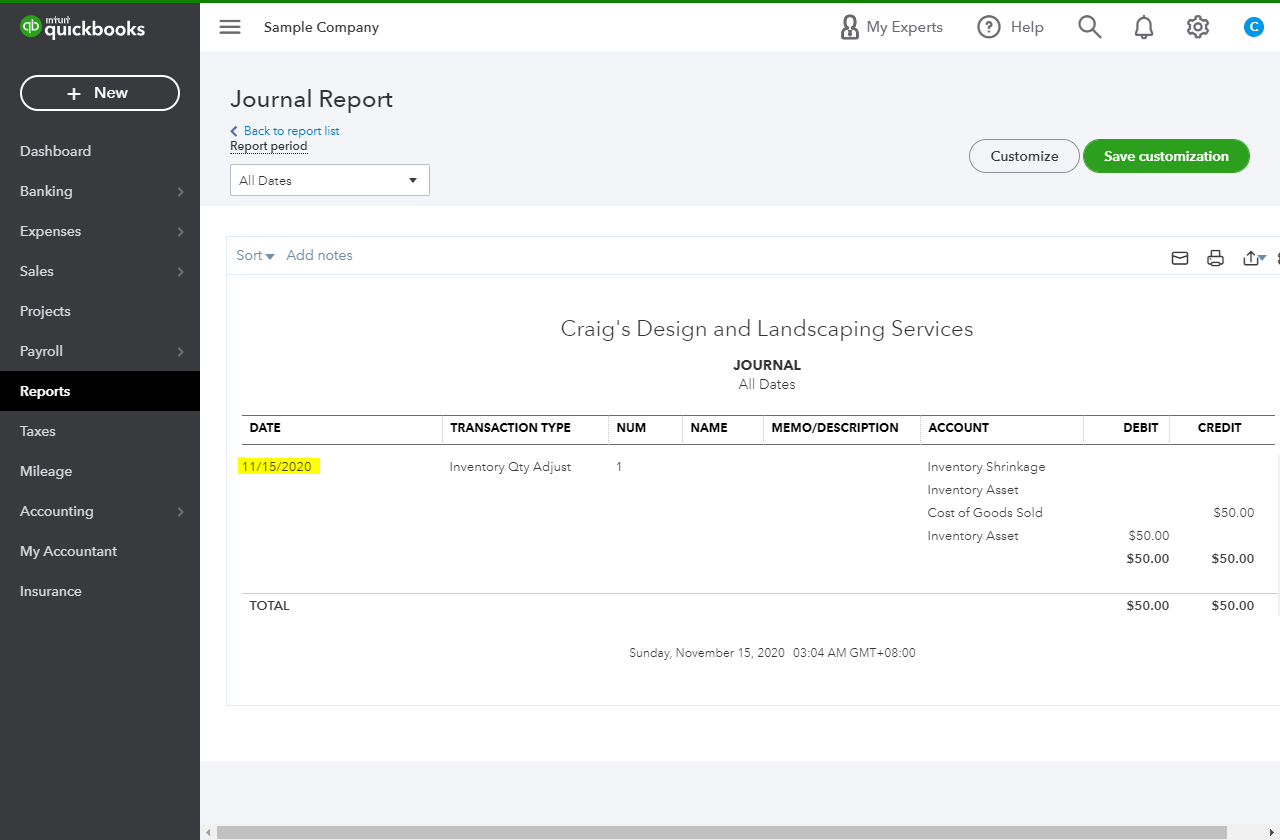 If you only want to see one line for the adjustment, you can export the report to an Excel worksheet. Once exported, you can now make changes to the rows or columns of the entries. Here's how: 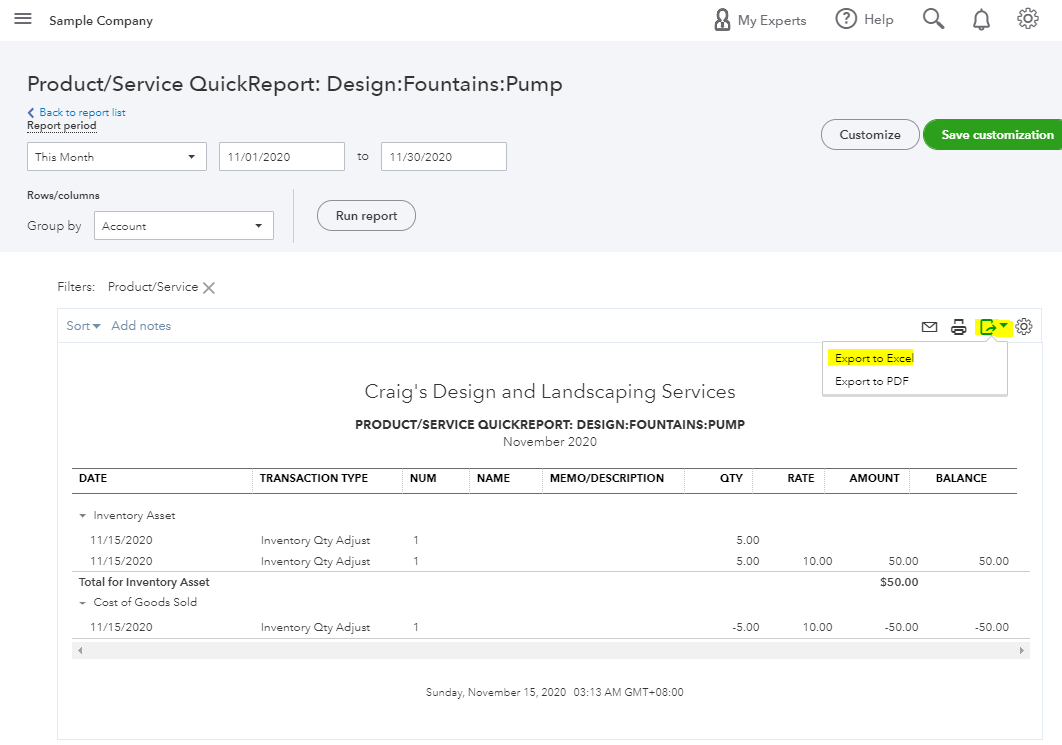 If you have any additional concerns, I'm always available for help. Leave a message below so I can help you further. Have a good one!