I have to say that I am absolutely shocked about the experience I had with Quickbooks Online. With this posting I am not trying to find a solution anymore, I just need to share my unbelieveable experience with the buggy software and QB customer support.

Last year in September I set up my LLC and decided to run my bookkeeping on Quickbooks - I used Intuit's Mint for personal reasons before and also did my tax returns with Turbo Tax (Desktop version). Two months into business I had fully set up my Quickbooks online account and recorded all my expenses and invoices. I noticed that QBO had quiet some bugs but I also noticed that with Turbo Tax and Mint before so I was not surprised and it also didn't bother me, nobody is perfect.

In November last year I tried to log myself into QBO like almost every day and although nothing changed to the day before I got an error message saying that no QBO account is associated with this eMail addy but I should not worry, I could start a free trial account. I thought this must have been a mistake and tried once more but got the same issue.

Now that I am a very technical person I immediately emptied my cache, tried a different brower, reset my password, etc. My account clearly existed because every time I would try to log in I would receive the 2-step verification code on my phone, etc. I was also able to reset my password, but I still always received the error message that a QBO account would not exist. I called the support hotline and they did not know what to do either. I stayed 90 minutes on the line with them and they took some screenshots and tried things I had tried before with no success. They created a case and said they would get in touch. Two weeks later I called the support again because I had not heard from them and could still not continue to do my bookeeping. I was also scared about my linked Chase accounts since nobody seemed to know what happened to my files. The person on the phone wanted to create a new case instead of rather trying to add to the case created two weeks before and the whole story started from the beginning. I have to say that QB continued to charge me the monthly fee, so my account clearly had to exist. The person on the phone said they would get in touch by email, which they did three weeks later saying that they ca not find the issue and I should wait until the next update is scheduled, which was first week of January 2018. Right after they updated QBO I received another email saying that their new updated did not solve the problem and I should wait another four weeks until they are going to install the next update.

Very often in between I kept on calling the support team and explained the problem from scratch, staying on the line with them for more than one hour.  They all said somebody would get in touch but nobody did with any solution. It was impossible to get supervisors on the phone, I was told the waiting time would be 2 hours because it's Tax season.

Today on January 25th I tried again to log in (I am trying weekly) and immeditaly I received the 2-step verification text message and this time the error message did not pop up. What appeared was a blank / empty account greeting my company to a brand new, empty Quickbooks offering me a tour to see all features of Quickbooks Online.

I am absolutely shocked, not just about the fact that Intuit lost all my bookkeeping from 2017, also about how customer support treated this matter, in the slowest time possible, saying I should wait four weeks until they are going to install their next update and about the fact that my connected bank accounts were not secure with Intuit.

I understand that Quickbooks is the main choice when it comes to bookkeeping and this can not happen very often otherwise QB would be out of business but I have never ever seen something like this before and am shocked that this happened. On another note, I am still getting charged every month for my account and have no clue how to make them stop charging me if they can not find my account. 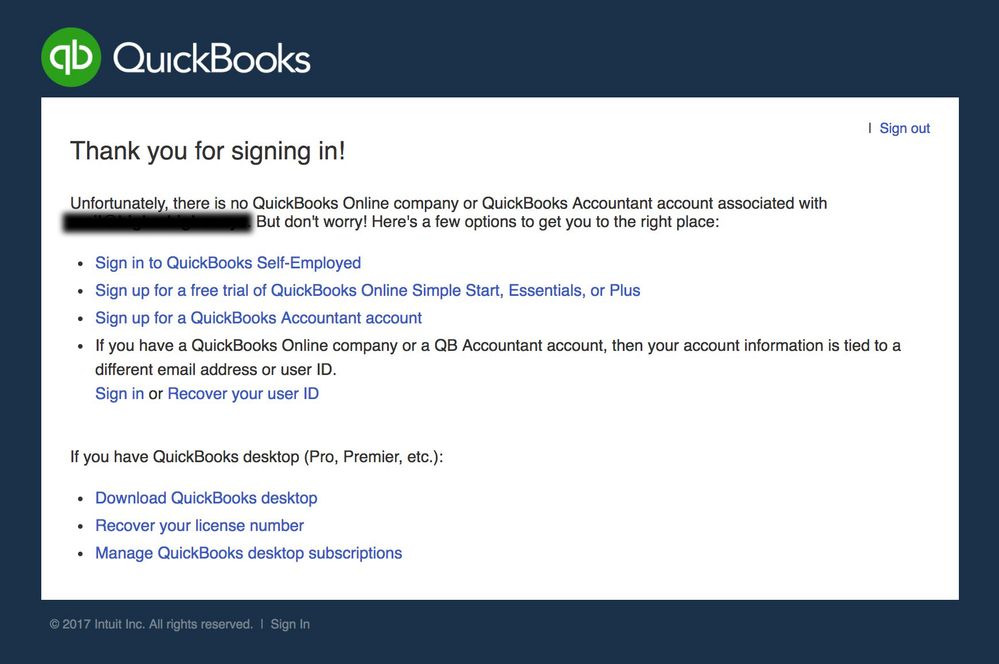 Hi @HH - I'm one of the (relatively new) hosts for QB Community, and I just read your post. I cannot even imagine how frustrated you must feel right now - there really are no words.

But yet. I think that was probably the most eloquent, well-mannered expression of personal frustration I have ever read, and I am really moved by it. We who work for ourselves have so much personally invested, so much to handle, so much TO DO. The tools we choose to help manage our businesses should absolutely help not hinder in our efforts. This post could easily have been a diatribe, a screed - but I really get the sense that your intent is to educate and inform us about your personal experience in the hopes that it may help someone else. There's something tremendously beautiful about that. It's what our community is here for, after all.

I have zero idea what happened to your account. I'm sure our team did their well-intentioned best to sort out this massive head-scratcher of a tech glitch. But it sounds like, in all the ways that it ultimately counts, we sucked the big one. We will find a way to make this right.

Anyway, I could have written this in a private message but I thought your post deserved a public response. I'll follow up via DM.

Automated certified payroll for construction companies
This is a hosted webinar,you must sign up on the registration siteto attend...
Read more

Master your accounting: Reconcile accounts and use reports like a pro
This is a Zoom webinar,you must sign up on Zoomto attend. Follow this link ...
Read more

Managing the new remote workforce
This is a hosted webinar,you must sign up on the registration siteto attend...
Read more