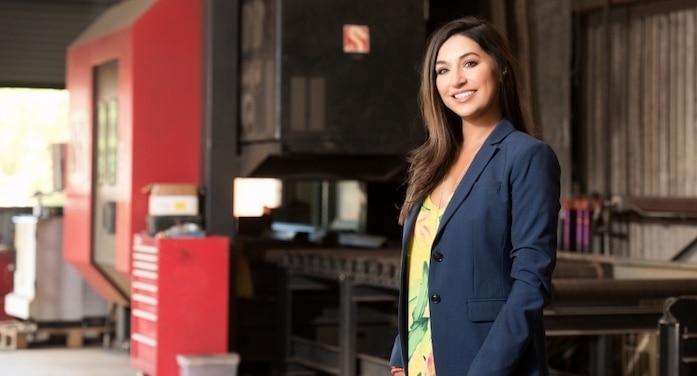 The world turned upside down the morning of August 29th, 2005 for residents of New Orleans.

Hurricane Katrina surged into St. Bernard Parish in Louisiana at dawn, destroying virtually every building in the parish. Only six of the 26,900 homes were left habitable.

Just a few months before the destruction, Mindy Nunez Airhart had no plans to join the family business. She had just graduated from Tulane with a degree in media studies and dreams of a journalism career. But with her family business’s facilities destroyed by Hurricane Katrina, Mindy was compelled to support her family through this time.

Mindy and her mother moved quickly to secure FEMA trailers from a government office in Baton Rouge. With these trailers, Southern Services & Equipment, Inc. (SSE) created a compound on their property where their employees could live and from which they could run their business.

Only a couple of weeks after Katrina’s devastation, SSE started working with the United States Army Corps of Engineers to start the process of breathing new life into the city, rebuilding pump stations and the federal levee system.

SSE had come a long way since Mindy’s parents, Marc and Cheryl Nunez, started the business with a small metal fabrication shop in 1996. Marc had always been autodidactic and a tinkerer, turning himself into a bona fide engineer without a high school degree.

After Katrina, the Corps of Engineers came to SSE’s office to speak to Marc because they couldn’t find a solution to a problem they were having. Mindy says about her father, “You’re talking about a team of certified engineers that worked for the United States Army Corps of Engineers. They’re coming to ask my dad, ‘What should we do with this? How should we go about this problem that we have?’ And he offered a solution they went with. It says a lot about how his brain works.”

Marc reinvested all of the profits from SSE’s Katrina construction projects into the infrastructure of their facilities. SSE started as a miscellaneous fabricator in 1996, creating products like steel handrails, stairs, and guardrails. With Marc’s investment in more robust facilities and equipment, SSE evolved into a structural steel fabricator, capable of creating the skeletons of the buildings fundamental to the New Orleans rebirth. His foresight would set the company up for rapid growth in the years to come.

Since 2000, SSE has used QuickBooks to manage their business. Although SSE’s buildings didn’t survive Hurricane Katrina in 2005, their QuickBooks file did. That’s thanks to Cheryl, who backed up SSE’s files on a CD before the hurricane. After the storm settled, they bought a laptop, installed QuickBooks, and kept their business going without missing a beat.

Today, as CEO, Mindy takes the lead in business development and public relations for SSE, while her husband Justin runs operations as COO.

Mindy also leads the team responsible for administrative work, dealing with payroll, insurance, and job costing. Among her office staff are eight project managers, a controller, and an assistant for federal projects. Of SSE employees, 35 are in the field installing steel, and 40 work in their fabrication facility creating it.

During SSE’s near 20 year experience with QuickBooks, Mindy only entertained the thought of switching once. After learning about an ERP’s industry-specific modules, Mindy asked an ERP salesperson how much implementation and migration would cost. She recalled, “When he said five figures I nearly fell out of my chair. I said, ‘No. It’s not happening.’ I pay less than $3,000 a year for QuickBooks. In my mind, that shut down the talk of me switching to any other programs.”

The Purchase that Took SSE to the Next Level

For most of her career at SSE, Mindy took the lead in business development and promotions for the company. She used the skills she learned as a media studies major at Tulane to give SSE a bigger footprint in New Orleans. Mindy said, “Even when we were a smaller construction company it didn’t mean that we shouldn’t promote ourselves, market ourselves, have a strong logo, and strong brand identity.”

Then about five years ago, Marc took a step back in running the business, turning over the reigns to Mindy and her husband Justin. They wanted to stay true to her father’s philosophy of reinvesting in the business and did so in a big way. They purchased a PythonX robotic structural plasma cutting machine, which changed the growth trajectory of SSE. The PythonX is basically a million dollar robot that cuts metal, and SSE had the first one ever installed in South Louisiana. Bolstered by the capabilities of the PythonX, SSE was capable of taking on more projects, which enabled them to grow from $3 million to $6 million to $12 million in revenue in three consecutive years. With a 294% three-year growth rate, SSE was named to the Inc. 5000 list of fastest growing companies in America two years in a row. SSE had started with a crew of 8 to 10 people, including Mindy’s parents. Today, they have 85 employees in the field and their facility combined.

But, SSE’s amazing growth rate wasn’t without its hiccups and growing pains. A byproduct of ambition and delayed commitments, the company was forced to start and produce projects simultaneously, leading to chaos in the facility and the field, as well as increased costs and overhead that ate into profits.

In 2016, SSE was selected for Goldman Sachs 10,000 Small Businesses Program. Mindy and Justin took an all expenses paid trip to New York, where they met Michael Bloomberg and Goldman Sachs CEO Lloyd Blankfein.

Mindy and Justin also spent two days with Bloomberg and Goldman Sachs employees and SSE’s numbers. Mindy said, “You’d think that would be easy, but it’s really not. And like I said, my husband and I, we’re good at a lot of things, but numbers are not always what we’re great at.”

It turns out SSE was charging less than the market called for in one key area, which explained why they were having cash flow issues, despite growing revenues by a whopping 294%. “It was a total game changer for us because if I don’t bid enough at the beginning of the job there’s no way for me to make more money on it,” Mindy said.

Mindy relies on QuickBooks Enterprise to track SSE’s financials, ensuring she can stick with her company’s goals in 2019. Mindy said, “We made the decision to not expand the business in the next couple of years. We’re working on making it more efficient and profitable so we run the best $12 million company that’s out there.”

One of the blessings of SSE surviving Hurricane Katrina is the company’s role in the rebirth of New Orleans. Mindy said, “It’s super challenging, but I enjoy seeing the way we contribute to changing the skyline of New Orleans. It’s an awesome feeling.”

Introductory photo by Jeff Strout, who is also a QuickBooks user.