Is Your Burn Rate Healthy? 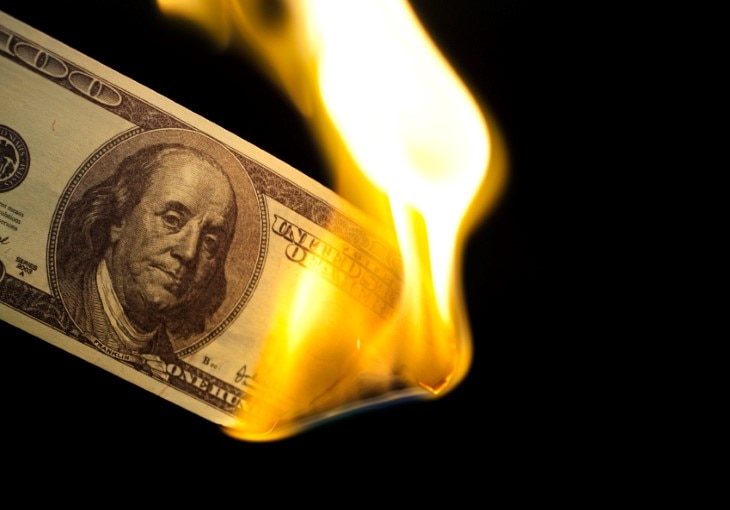 You have to spend money to make money, but how much is too much? If you’re a self-funded business venture and you’d rather not accept outside funding, a slow, sustainable burn rate can help you stay independent. If you’re seeking venture capital, spending money to accelerate growth may be a better way to grow.

Burn rate is the amount of cash your business spends per month. For example, if your total cash outflow is $10,000 each month, your burn rate is $10,000 a month. The metric is most relevant when you’re in the early startup stage of developing a product and you haven’t yet begun to bring in revenue. If do have some revenue but you’re not profitable yet, you may calculate your “net burn rate” instead. Net burn rate is cash inflow from revenue, less cash outflows. So if you make $3,000 in revenue but spend $10,000, your “net burn” is $7,000.

Your burn rate is important for a few reasons. First, you can compare it with your cash reserves to determine how long you can remain solvent without any new infusions of cash. For example, if you’ve got $21,000 in the bank and your net burn rate is $7,000, you’ll be insolvent in three months. In addition, burn rate is a critical metric for investors and buyers. Venture capital firm First Round Capital sums it up in its December 2014 parody video, “It’s All About Burn Rate.”

The answer depends on who you ask. Last year, a number of analysts expressed concern over rising burn rates at startups. Netscape founder and Andreessen Horowitz partner Marc Andreessen explains that businesses with high burn rates can’t adapt as quickly to a changing market and usually aren’t operating efficiently. He’s convinced that, at some point, big companies will stop acquiring startups, especially those with a high burn rate.

But for Scott Nolan, a partner at venture capital firm Founders Fund, lower is not always better. In his TechCrunch article, Nolan mentions that Founders Fund won’t invest in a company that’s not burning a good amount of cash. The firm would rather put its money where it can stimulate rapid growth, which he says tends to be companies that are still in the red. Rather than judging the burn rate itself, the firm considers how a company is using cash and its long-term strategy.

Matthew Toren, co-founder of YoungEntrepreneur.com, echoes that sentiment. Rather than getting hung up on a specific dollar amount, Toren advocates spending capital on strategic business opportunities and keeping overhead to a minimum.

A healthy burn rate is relative to your business needs, funding opportunities, and goals. Still, there are benchmarks you can consider. In a 2011 post on burn rates, venture capitalist Fred Wilson suggested that software startups maintain a burn rate of less than $10,000 per month per employee. For example, if you have five people working full-time for your business or project, your net spending should be less than $50,000 per month.

A Word on Risk

Spending beyond your means is a risky strategy, but it can pay off handsomely in some cases. If you do have a high burn rate, keep your commitments flexible. If funding or revenue streams don’t come through as you hoped, be prepared to quickly scale back to a sustainable level.