How to Manage Conflicts Between Employees 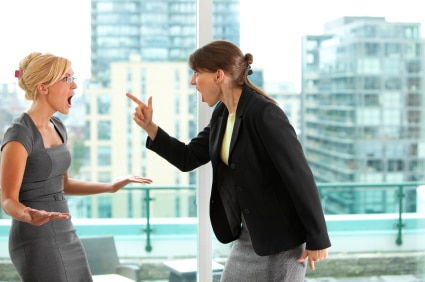 Sometimes, people just don’t get along. If you’re managing employees in a small business, you’re bound to find yourself dealing with a personality clash at some point or another, whether it’s something as simple as a staff member playing music too loudly or something as nasty as rumors being spread or even the threat of a physical altercation. No matter what the situation is, there are a number of ways to handle it gracefully. Here are some steps to take when you have to manage workplace conflict.

Find out what the real problem is. Meet with the people involved in the problem in a private room, and set aside an hour or two to focus on the situation. Then listen to both sides of the argument, asking both sides to state their problems in no-fault terms like “I feel like I am left out,” instead of “You always leave me out.” Be careful not to state any bias towards either party while determining the facts of the situation.

Come up with clear steps to solve the problem. Invite each employee involved in the conflict to come up with a series of proactive steps that both they and their fellow co-workers can take to end the problem. For instance, if one employee is annoyed when his co-worker plays music loudly, the solution could be as simple as a pair of headphones. If the situation is more involved or emotional, though, you may consider bringing in a professional mediator to help resolve the conflict.

Evaluate the solution’s success. Schedule a follow-up meeting between the involved parties after a period of several weeks to determine how well the issue has been resolved. Additionally, keep a close eye on the situation yourself, and get ready to have a private discussion with one of the employees if he isn’t living up to his end of the deal. Depending on how serious the offense is, you may need to give an ultimatum that the offending employee will lose his job if he doesn’t take the necessary steps to resolve the problem.

Identify when the issue is harassment. Many workplace conflicts stem from simple misunderstandings or personality clashes, but in some cases, the issue may be far more serious. If one employee is insulting another on the basis of gender, ethnicity, sexual orientation, or another personal issue, this is a matter of harassment, and must be taken seriously. In many cases, this will mean firing the harassing party. If you believe one of your employees is harassing another, consult with an employment lawyer immediately to find out the best steps to take.

Focus on building a united team. Once you’ve resolved your workplace conflict, help ensure that new problems don’t arise by working to bring your staff closer together. Host occasional potluck dinners, and shut down the office for a paid afternoon of bowling or mini-golf every once in awhile. You might also consider trying some icebreakers and teambuilding games at the office. These activities will give your staff the opportunity to warm up and get to know one another outside of the workplace, which will go a long way towards getting all of your employees to like — or at least tolerate — one another.