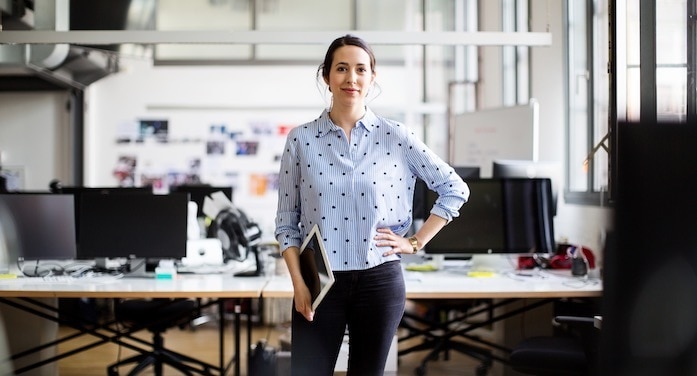 Ask any female entrepreneur about the biggest challenges facing her budding business, and she’s bound to mention this: finding funding.

This concern over dollars is normal for any business owner, but it’s especially high among women. One 2019 survey shows that women business owners are 43% more likely than men to be concerned about limited access to money or funding.

Of course, this isn’t a new conversation. As the spotlight continues to shine on gender equality and the wage gap, there’s been increasing emphasis on financially supporting more female entrepreneurs. Yet, the statistics are barely improving.

Why? The answer lies on three fronts: the data, the biases, and the doubt.

Sure, these numbers continued in the right direction in 2018, with female founders grabbing 2.2% of total dollars. But, it’s obvious that the gears of progress are grinding slowly. Women still have a long way to go when compared with their male counterparts.

Why such low numbers? Many venture capitalists claim that it’s a lack of availability. They can’t support these women-led businesses, because there just aren’t any in the pipeline. But, recent research shows that women (particularly black women) are the fastest-growing group of entrepreneurs, so lack of women-led business to fund can hardly be the case.

Instead, it’s the venture capitalists themselves that might be the problem. If you look at venture firms in the United States, only 9% of decision makers are women. That’s an increase over the 7% representation in 2017, but women still don’t have anywhere near equal representation in these roles.

This makeup of the investment audience itself presents a problem because bias—whether conscious or unconscious—is real. A Caltech study discovered that male-led startups are almost twice as likely to get funding from male investors than female-led businesses.

The researchers concluded that this is likely due to something called taste-based discrimination. “Male investors simply prefer to fund male-founded companies for reasons that may include outright sexism as well as subtler factors, such as a desire among male venture capitalists to mentor young entrepreneurs who remind them of themselves,” says a Caltech release about the study.

This means female founders have to work even harder to prove the value of their businesses—particularly if they’re targeted toward women.

“When the investor is a man, he doesn’t seem to connect emotionally with the problem that my company is addressing,” explains Diane Smith, founder of ParTAG, a marketplace for rentable goods.

“I think this has been an issue for anyone trying to tackle problems that aren’t shared by straight white males in general. When I get in front of women, they nod their heads and say immediately, “Yes, I get it.” So we can move on from the premise if the problem is worth trying to solve or not, and delve right into how I am doing it and where I am in the process.”

While Smith recognizes that these emotional ties don’t make up the entirety of an investment decision (things like market size, revenue, and traction carry weight as well), they are what seem to get the conversation started.

One of the biggest hurdles that women need to overcome when pursuing funding for their businesses? Their own self-doubt.

Many experts cite something called the “confidence gap,” a term coined to explain the disparity between the confidence levels of men and women. Evidence shows that women are far more likely to underestimate their own abilities and qualifications.

This innate self-doubt makes aggressively pursuing funding—something that obviously requires a high degree of self-assuredness—a struggle for many female entrepreneurs.

“So much of ‘asking’ is about asking with intention and confidence,” says Eva Jane, founder of The Makeup Bullet, an innovative cosmetic sponge. “It seems to me that when you have a well-laid plan and tangible motion, people want to jump on a train that is moving.”

“It seems rudimentary and simple,” adds Chung about getting comfortable with asking for what you need. “It’s not. Especially for women. And [it] wasn’t for me.”

What makes the art of the ask so daunting? Women are quick to shoot themselves down and count themselves out. According to an internal report from Hewlett Packard, men will apply for jobs if they meet 60% of the qualifications. Women, on the other hand, don’t bother tossing their hats into the ring unless they check 100% of the boxes.

Much of this ties back to that confidence gap. Female founders don’t feel worthy of seeking funding if they don’t have all their t’s crossed and i’s dotted.

“I find myself falling into this trap too and have to tell myself that just because I don’t meet all of their criteria, I should still reach out [and] apply,” says Smith. “What’s that saying, ‘You miss all of the shots you don’t take’?”

The issues that female founders face in securing funding for their budding businesses aren’t small. Not only do they need to approach male-dominated investment audiences that are often riddled with biases, but they also need to pull off a flawless pitch while they’re saddled with their own self-doubt and shaky confidence.

Fortunately, the money is (slowly but surely) moving in the right direction. And, with more attention being drawn to this major disparity in financial backing for male and female entrepreneurs, we can only hope that this progress will continue.