How to hire manufacturing employees in the age of automation 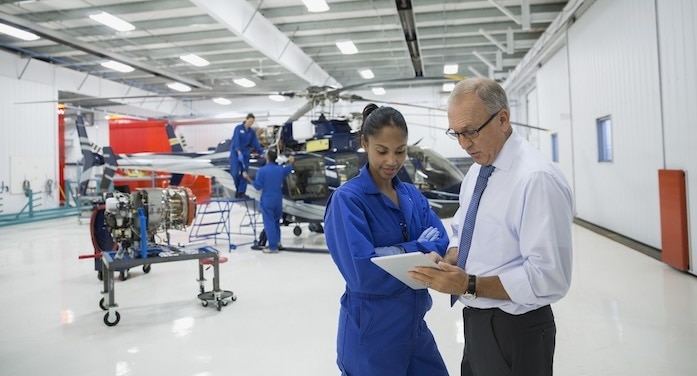 According to the National Association of Manufacturers (NAM), more than 80% of manufacturers struggle to find the talent they need. But despite the availability of opportunities, young people today don’t see manufacturing as an attractive field.

Over the next ten years, approximately 2.4 million manufacturing positions may be left unfilled. Automation might be replacing unskilled labor, but it’s also creating more skilled, hi-tech jobs that are left vacant because not enough people are trained for them.

A study by Deloitte and the Manufacturing Institute found that the top reason for this view is a lack of job stability and security. In an industry where 5 million manufacturing jobs vanished in just over a decade, the overwhelming perception is that manufacturing is not a stable industry for career opportunities.

One poll by the Foundation of Fabricators & Manufacturers Association found that 52% of teenagers were not interested in manufacturing, and a majority of these respondents thought of the manufacturing industry as a “dirty, dangerous place that requires little thinking or skill from its workers and offers minimal opportunity for personal growth or career advancement.”

While this description is far from reality, negative public perception can make the manufacturing skills gap even wider unless efforts are made to address these concerns. The Deloitte study also discovered that when people were more familiar with the manufacturing trade, they tended to view it more favorably.

What are the missing skills?

In the Deloitte report, companies identified the top skills they found most difficult to find as follows:

There’s a clear trend in more technical requirements for manufacturing jobs, as complex processes like 3D printing and high-performance computing require more skilled and trained workers to manage them.

The ability to perform these complex tasks are also aligned with the World Economic Forum’s predictions for the top ten most required skills for the Fourth Industrial Revolution in 2020:

Compared to the WEC’s list of the top ten skills required in 2015, creativity jumps up seven places while emotional intelligence enters the list for the first time. Even in the space of five years, technology is rapidly changing the current job market with a shift in values and skills.

It’s not hard to see why these skills are the most in-demand—automated processes, AI, and robots can’t replace human skill in these areas and won’t anytime soon. As automation takes over the more mundane, repetitive, and non-creative tasks, businesses will need skilled workers who can work with and complement new technologies.

As industrial IoT and automation are transforming the entire manufacturing industry, training workers shouldn’t just be a priority for trade schools and colleges. Manufacturers who want to thrive in this tech-driven environment will need to invest in a knowledgeable pool of employees out of necessity.

Here are some practical ways to find the skilled workers you need for your manufacturing business.

Engage with the younger generation on Manufacturing Day

Manufacturing Day (MFG Day) is an annual event in October sponsored by the National Association of Manufacturers to engage future generations with the trade. Since 2012, various manufacturing organizations have participated in events like factory tours, competitions, and scholarships to recruit talent and address the skills gap.

The initiative is not just limited to one day, but available as a source for both employers and jobseekers year-round. The NAM says over 300,000 students attend the event each year. Opening your doors for students can be a great way to expose future workers to career options at your company. If that’s not an option, sponsoring events is also a way to connect with those interested in training for skilled manufacturing jobs.

The association has also put together a competition called MakerFest, in which participants showed off their skills in sectors as diverse as carpentry and CNC programming. For companies targeting specific skills for recruitment, events like this can be a great way to recruit young talent.

Partner with schools and offer scholarships to provide early training

In the U.S., career and technical education (CTE) has experienced a decline since the 1980s as focus shifted to academia and traditional four-year college degrees. But with growing talent shortages in trades, vocational schools and training programs are on the rise once more.

When Hoang Phan started with Kroger Manufacturing, his job was to simply load beverages onto trucks. But through the company’s apprenticeship program which is partnered with the Atlanta Technical College, he can get an associate degree and certifications to work as a maintenance technician. Without this training, his only option would be unskilled labor.

Another company providing similar initiatives is the Wisconsin-based lawnmower manufacturer, the Ariens Company. One way it helps its local community of Brillion is by funding the STEM classroom space in the local high school. It also offers scholarships to fund technical secondary education for the children of its employees as well as students in the region. This has resulted in some of its recipients and beneficiaries ending up as employees in their company.

In both examples, the employees benefit from the training while the companies gain skilled workers from its pool of entry-level hires or local students and other candidates. Tapping into these sources can be a great way to access the skills you need for your increasingly complex and technology-driven manufacturing operations.

Michigan is leading the movement for state-led funding and programs for skills training. In 2018, the Michigan Senate passed a bill that created the Going PRO Talent Fund, which specifically seeks to address the manufacturing skills gap. By providing funding to local manufacturers and offering $500 of additional funding per veteran trainee, it eases the pressure on businesses trying to find talent.

This comes on the heels of the reauthorization of the federal Perkins Act, which provides $1.2 billion in funding for CTE programs in all 50 states. Look up your local CTE departments to see what kind of funding might be available for businesses in the area, and to see which schools participate in skills training.

Those working in the manufacturing industry know that the skills gap is real. Unfortunately, part of this is due to the growing generational shift that sees baby boomers retiring from the industry while young people entering the workforce increasingly view manufacturing as a trade of the past. The key to hiring skilled workers for manufacturing jobs of the 21st century is to invest in changing that perception by providing training and incentives that present it as a viable career for the future.