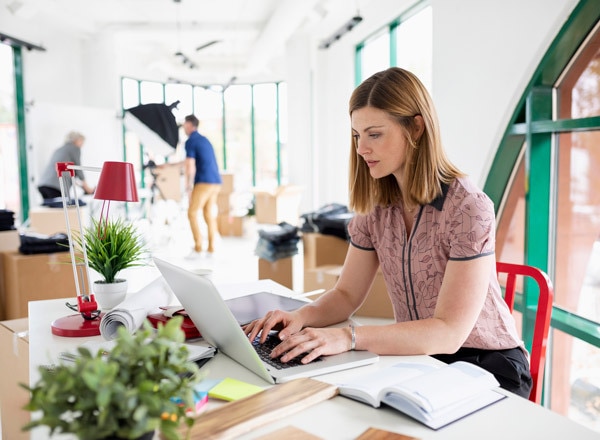 In the early 2000s, Gaurav Nanda was going to work every day at the General Motors Design Center in Detroit, where he worked as a sculptor in interior auto design. The years working at GM gave him a solid foundation in understanding design and functionality; yet Nanda’s creative side needed an outlet that a corporate environment couldn’t quite provide, so he spent his nights at his home studio, tweaking his own furniture and product designs.

One of those designs was inspired by a fellow Detroiter, the designer Harry Bertoia, who invented the famous Bertoia chair in the 1950s.

Nanda’s creative take on the familiar wire and metal mid-century chair made a splash when it launched in 2010. The Lucy chair, as he called it, quickly went viral in the media, becoming a favorite in the retail and design circles. It was exactly what he needed to strike out on his own and fulfill his dream of being an entrepreneur.

“That was not something that I would have ever done at General Motors, to develop my own aesthetic and voice. I had to find an outlet for that and that’s why I was working after work at the studio,” Gaurav explains. Little did he know, this passion project would be the catalyst for launching his own business, Bend Goods.

Why the interior design industry fell in love with a chair

Despite the fact that the economy was in a recession, Nanda’s eye-catching design drew a lot of media attention from the start after major publications including the LA Times and Elle Decor featured the chair. “They felt it was fresh, new, and something they hadn’t seen before,” Nanda recalls.

Perhaps it was the unique, colorful, wireframe spin on a familiar design, aided by the ever-constant popularity of mid-century modern design. As Patrick Parrish, owner of the Patrick Parrish Gallery once said in the New York Times, mid-century design has been the “new cool thing five times in the last 50 years.”

The Lucy chair presented the classic design in a fresh way using material traditionally not associated with the mid-century style. The media attention enabled Nanda to get into retail outlets like ABC Home in New York and A+R in Los Angeles. Going to various trade shows landed him more retail partners and gave him exposure in the design world.

Following the desire to commit full-time to his new venture, Nanda moved to Los Angeles and opened an e-commerce operation out of the living room of his loft in Venice Beach with a small website he’d built. Initially, the only people working on the business were Nanda and his father, a retired engineer and entrepreneur with previous experience running a community newspaper.

The creative efforts continued and led to another product launch one year later. Once again, Nanda’s unique wireframe animal decor caught the media’s attention. By the time the business moved to the Bend House, a Spanish bungalow in West Hollywood, they’d expanded to their first employees––one in sales, one in marketing, and one in customer service.

After that, Nanda realized he needed to separate the business space from his personal home, so they bought another space, which they called the Pointy House due to the steep roofs. This also meant they could now offer a physical space for customers to come in and experience the design for themselves, as opposed to keeping operations strictly online.

Eventually, Bend Goods outgrew this space as well and decided to open a proper showroom on Melrose Ave, where they’re based today. Bend Goods’ primary clientele is other creatives—architects and designers who come to the store looking for unique but commercial-friendly products to showcase in public spaces like restaurants and airports.

But the operation isn’t without its challenges––since Nanda launched his first collection, the design landscape has changed drastically. Now, popular, unique designs are in constant demand, which has led to imitations and copycat products.

Nanda’s solution is to keep innovating.“They’ll never be able to truly know what’s inside my head or what vision I have going forward,” says Nanda. “Then again, it’s also a challenge for me having to constantly try to figure out how to be innovative.”

From the start, Bend Goods has been 100% bootstrapped. This meant it was even more important to keep track of finances––a feat Nanda’s father accomplished with QuickBooks Enterprise, hosted on their Macs through RightNetworks. Since his father had previous experience running a business, his help was essential in the beginning.

Today, there are a total of seven people on the team, working in marketing, accounting, customer service, and of course, design. It’s a lean team but Nanda and his father prefer it that way. With Enterprise, they send invoices, look at financial reports to determine profit and loss, and manage inventory. Another big aspect of the operation is tracking customer orders and keeping an eye on production.

Nanda elaborates on their processes, “A customer may want a special color, so we have to take the product out of the warehouse and send it to a powder coater. We use Enterprise for that whole tracking of where things are.”

He adds, “When we get shipping quotes, we put that in QuickBooks. We put the product quantity, colors, and when they need it shipped.”

Although the software plays a significant role in keeping daily operations on point, maintaining a lean team has always been a conscious goal. “I think [developing the right team to work with] was really important to me and it took a minute really to figure out how to do that,” says Nanda. “I never managed people before I started this company.”

This approach to finding a tight-knit team that works well together is good for Bend Goods in more ways than one. Namely, it keeps costs low while allowing them to stay true to their vision. It’s what has led the business to remain steady for a decade.

“Having a large team is a lot harder to manage,” says Nanda. “Having all of us connected and working well together, making sure the whole team is happy and paying those people well [gives us a strong foundation].”

This focus also extends to what vendors, retailers, or influencers the company chooses to partner with. “[You have to be] really cautious about where you’re spending your money. What influencer agreements make sense, or what type of trade shows to go into. Make sure you know where your money is going and that it’s been used wisely.”

A decade-long celebration of creative endeavors

As Bend Goods comes up on its 10th anniversary next year, they’re remaining true to their original vision of entrepreneurship and innovation by launching new designs and evolving with the current design space.

One of the newer challenges is the rise of social media, where the emphasis lies on eye-popping design and striking photography. While this may seem like an advantage for a design company, the constant demand for content on platforms like Instagram means the team needs to put in a lot of hard work just to keep up.

Ten years ago when Nanda was starting out, magazine articles and media coverage made a big difference in attracting customers. Today, the game has changed completely. Viral success on social media dictates the who’s who and what’s what in nearly every industry but especially when it comes to design. “It’s a huge undertaking to try to be engaging with your customer base,” Nanda comments. “I think every industry is probably experiencing that. Everybody needs constant content to be relevant.”

Bend Goods’ mission going forward is to keep that same spirit Nanda had when making his first chair in Detroit. They’re experimenting with materials they’ve never used before and rolling out new products. After all, their entire business started with just a single chair with a superb design.