Where to find a new breed of manufacturing employees 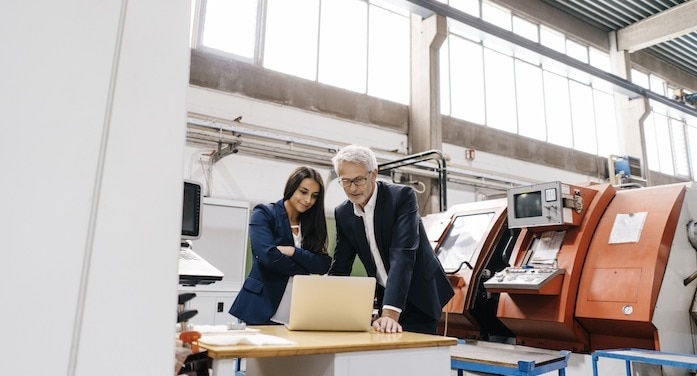 Politicians, labor leaders, and countless other Americans have called for the return of manufacturing jobs that were outsourced to China and elsewhere in the late 1990s.

You can’t blame them. Production jobs were the backbone of the American economy for decades, then… poof—millions of domestic factory workers were displaced by foreign labor.

Keeping labor costs down was a big part of the decision to ship jobs abroad in those days but earnings weren’t the only factor.

The world really did get smaller in a sense. Email, chat, and video conferencing all became commonplace. Businesses could, in real-time, find out what was happening on a shop floor in Beijing, 6,500 miles away from their home office. The Chinese government also greased the skids by opening its doors to foreign investment in 1978.

Back in the United States, another technological revolution was taking place. Automation in assembly plants played its own hand in pushing unskilled workers to the bread line or forcing them to find other ways to put bread on the table. It turned out that operating and maintaining sophisticated machinery, to no one’s surprise, cost a lot less than the wages and benefit packages of humans who once operated less capable contraptions.

Indeed, a perfect storm swept the soul of the U.S. manufacturing sector to the other side of the Pacific. Unemployment rates more than doubled between 1999 and 2010 but business leaders and their labor counterparts refused to quit. Gradually, something remarkable began to unfold.

The return of competitive manufacturing

Business executives, frustrated with the substandard quality of foreign goods, searched for ways to improve product build and design while posturing to bring manufacturing jobs back to domestic soil.

Union chiefs and their constituents knew they had to do their part as well. A couple bucks less an hour no longer broke the deal if it meant millions of workers could reclaim what was once theirs. In 2019, some of that lost hope had been found.

Today there are about 12.8 million manufacturing positions in the US. That level equals the manufacturing job count from 1949, when Mao Tse Tung thought government ownership of the means of production was a banner idea. Seventy years later, demand for a whole new kind of U.S. factory worker has arrived.

Deloitte released a recent study that predicts the manufacturing industry will create about 4.6 million jobs by 2028, and businesses will scramble to fill about 2.4 million of them. You might wonder how this is possible.

All this anxiety over robots and automation and machines that think like humans—surely they will hammer the last nail in the coffin of the American manufacturing labor force, right? Despite what you might believe, perhaps the death of the factory worker has been greatly exaggerated.

Times are changing for manufacturers

Almost 30 years have passed since that tempest ushering manufacturing jobs overseas made landfall in parts of Asia. In 2019, the winds have reversed course for the shores of San Diego and Miami, and more inland toward Omaha and Atlanta. Business owners managing production lines have both a cause to celebrate the boom and prepare for some hurdles. In August 2018, about 508,000 open manufacturing positions existed, and as we’ve discussed, that number will grow. Three trends will contribute heavily to the shortfall predicted by 2028:

In the next ten years, nearly two million people will retire from production-related positions and with them will go their skills, knowledge, and abilities. Talent like that is difficult to replace. To combat the exodus, some employers have enticed veteran workers to put in a few more years on the job or function as part-time consultants.

In the film, The Graduate, a friend of recently matriculated Ben Braddock’s (played by Dustin Hoffman) parents offered the young man one word of advice: “Plastics.” That flick was set in 1967— amidst the heyday of American manufacturing. Today’s parents and that neighbor might whisper health care, law or information technology in a twenty something’s ear— and not necessarily in that order. Freshly degreed young people just don’t view occupations in industrial concerns as alluring or lucrative.

Technology has put its stamp on the shop floor

They can’t have a beer with a robot after a shift but production line specialists do work in tandem with artificially intelligent machines that assist in assembling consumer electronics or other durable goods. Where automation was once thought to eliminate manufacturing jobs, the spread of technology also creates pressing demand for a bevy of workers with upgraded expertise. Digital skills and programming capabilities inside factories are two key skill sets talent acquisition personnel will increasingly hunt for among resumes of job seekers.

For a quick peek at progress within the manufacturing industry, consider that Boeing uses augmented reality to create a 3D image of an electrical diagram in the belly of a jet aircraft. Using hands-free headsets to view schematics or help functions, technicians wire the electronic systems of Dreamliner 787s, boosting quality initiatives and reducing time to project completion.

Caterpillar has come up with a way to project virtual models superimposed on top of its real-world heavy equipment. Customers merely point a mobile device or headset toward the physical machine and, through goggles or handheld devices, see something identical in size, scale, and configuration to a 15-ton D3 bulldozer. The concept aims to prevent Caterpillar’s service consultants from having to visit the actual repair facility or construction site themselves.

So as the Fourth Industrial Revolution gains momentum and forges ahead, how will you find the new breed of production talent destined to drive your business forward?

Shelter from the storm

In an effort to stimulate interest in STEM jobs, the Manufacturing Resource Center in Pennsylvania co-sponsors annual contests among regional junior high schools that ask students—who are paired up with small manufacturing businesses—to answer the question: “What’s so cool about manufacturing?” The kids, their parents, and the community found a lot to like amid companies that ranged from food processors to semiconductor fabricators.

Step up to the university level, and witness a new degree program in Mechatronics, offered by Northern Kentucky University. The curriculum is the brainchild of the school itself, Rockwell Automation, and CBT Company. Industry and academic leaders are well aware of the gap between recent graduates’ aptitudes and the skills they need to succeed in the new manufacturing era. The two businesses assisted with the school’s acquisition of software and hardware, including a programmable logic controller that’s become a fixture in many small and midsized production facilities.

Move on to the post-graduate crowd, and we’re seeing signing bonuses and bidding wars become more prevalent with recruiters because good help is hard to find. And once manufacturers do hire top talent, retaining those key employees presents additional challenges.

Internally, manufacturing businesses must assess employee engagement and their desire for advancement—or risk losing talent to a higher-paying competitor. Robin Erickson, vice president of Talent Acquisition Strategy at Deloitte, said, “Companies must remember how competitive the market is. They might want to keep employees at a particular job, but many people aren’t willing to wait years to move up the corporate ladder. They will leave for another company.”

Some executives look at the manufacturing skills gap as part of a bigger problem. At its core, the shortage of specialized labor originates as much from nearsightedness as it does a lack of training and formal education. Deloitte also noted that about three out of every 10 parents strongly agreed that they would not recommend a career path in manufacturing to their children due to concerns over security, stability, pay, and perception. Apparently, some folks still hold a Laverne and Shirley-esque view of the factory floor, where popping a cap on a beer bottle defines the job, and the breadth of the opportunity.

The industry has its own champions, motivated to change that decades-old view of manufacturing jobs. Titan Gilroy, owner and CEO of Titans of CNC, a company whose parts equip SpaceX rockets, said, “The skill gap is a lie. It’s a symptom of a problem, and that is of awareness.” From the bottom up, and with production jobs back in vogue, business owners must send the message to kids, recruits, and skilled laborers alike, that the shop really is a pretty cool place to work again.

This article currently has 5 ratings with an average of 2.6 stars

Thomas Tracy
Thomas Tracy is a writer and small business consultant with 28 years of experience in the insurance, employee benefits and financial services industries. Read more