How to Protect Your Business When Hiring Independent Contractors 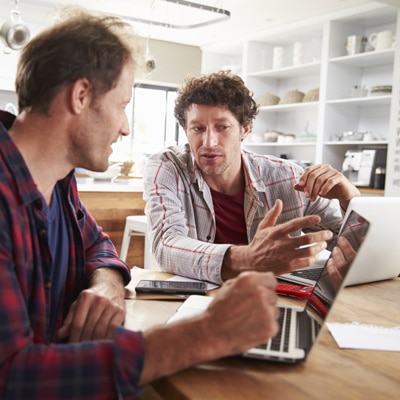 To hire or not to hire?

That is the question many small business owners are facing today. As your business grows, you need to a strong team to help you achieve the next level of success. But it’s scary to think about taking on additional staff, especially in a dubious economy. Additionally, if you hire someone who isn’t the right fit for your company, experts say it can cost more than 20% of the employee’s salary to recruit and hire another candidate.

These factors are causing many small business owners to choose freelancers or independent contractors instead of adding full-time employees to their team.

Why Should I Hire Independent Contractors?

Independent contractors are considered to be in business for themselves; therefore, your company is not required to pay state and federal payroll taxes or other employee benefits, which can add 30% or more to payroll costs. Instead, the independent contractor is expected to pay his or her own estimated taxes directly to the IRS every quarter. Furthermore, you don’t have to offer freelancers vacation time, sick days, overtime pay, etc.

Sounds like a sweet deal, doesn’t it? Don’t rush to judgment.

The ease and cost-savings of hiring freelancers is one of the many reasons why the number of freelancers in America is rapidly increasing. According a Freelancers Union’s study, “Freelancing in America 2015 Report,” 54 million Americans are now doing freelance work.

You may have heard about recent charges by the California Franchise Tax Board against Uber, which argue that its drivers should be classified as employees rather than independent contractors for tax purposes. That could be a significant setback for the burgeoning transportation company. While Uber may have the firepower to push back against the tax man, your small business probably doesn’t. So it’s better to make smart, well-advised decisions about classifying your workers before it’s too late.

How to Determine If Your Worker Is a Contractor

Various state and federal agencies and taxing authorities have a variety of tests to determine whether a worker is properly classified as an independent contractor or not. The most commonly recognized assessment is the IRS’s 20-factor test, most of which is listed below. I’ve only included some of the highlights so you can get an idea about the criteria these agencies consider when making a determination.

To be classified as an independent contractor, the individual must: Many business owners believe a written Independent Contractor Agreement can establish the nature of the relationship with the worker. But while an agreement should clearly spell out the scope of work, when the work is to be performed and the independent contractors’ compensation, it won’t be the determining factor in preventing a contractor from being classified as an employee by an auditing agency.

There are a plethora of laws governing independent contractors. As a result, a worker may be considered an independent contractor under one, but deemed an employee under another. Therefore, if you have doubts about how to classify a worker’s status, check with your legal counsel or a human resources professional. Misclassifying an employee can be a costly mistake, as you may be liable for back taxes, interest and penalties. So be sure to protect your small business by performing due diligence and making wise decisions.

This article currently has 7 ratings with an average of 2.1 stars