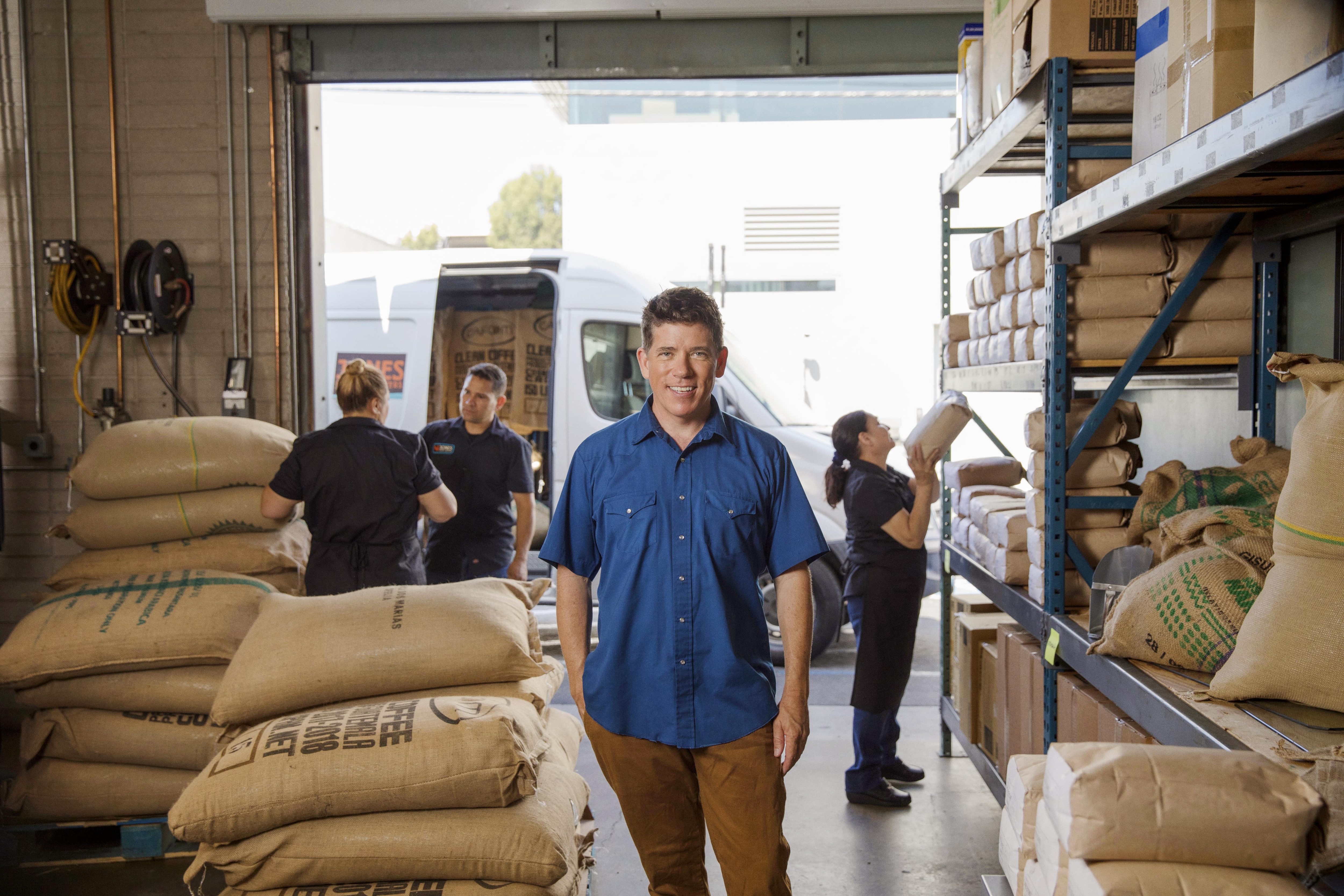 In 1870, Chuck Jones’ great-great-grandmother acquired a coffee plantation in the highlands of Guatemala. Centuries later, her descendants brought over coffee from that very same farm to the States to start Jones Coffee Roasters.

The company first started out in 1993 as a business venture between Chuck and his brother Larry. “My grandfather, who was the third generation at the farm … didn’t want to take any risks with us because we were just young kids,” Chuck remembers. “So he told us that we could take any coffee we wanted from the farm, but we had to pay for the coffee, just like any other customer.”

Initially, the brothers paid for a container with 40,000 pounds of coffee beans, which they sold to roasters all over North America in their first year of business.

As year two began, the price of coffee had doubled in the market. This meant their second container cost more than double the cost of their first container, teaching the Jones brothers a valuable business lesson in financial planning, margins, and the cost of goods sold.

By their third year, the Jones brothers realized they needed to roast some of their beans since they couldn’t sell all the green coffee they’d purchased. This way they could turn their unroasted green coffee beans into the final roasted product and sell them to local wholesalers and customers. “We bought the roaster to have a more finished product, and make a little more money on the margin,” says Chuck.

The Jones’ first “roastery” was a 10×10 space in the front window of a friend’s ice cream parlor, which they rented for $1 per square foot. Since they had no storage space, the parking lot outside became home to their 20-foot coffee container as well as all other operations, including coffee grinding and packaging.

“When I went to put a third 20-foot container [in the parking lot], my friend told me that I probably had to move out and find someplace else to do my business, because I was outgrowing the space,” Chuck explains.

By 1997, their second year roasting, they came across an opportunity to supply their beans to a little coffee shop on the Caltech campus. “I thought it would be the biggest account I would ever have in my entire life,” Chuck comments. But, the victory was short-lived.

Shortly after the deal was done, the university launched an initiative to revamp their entire food operations across campus, putting their relationship with the coffee shop in jeopardy. “The manager from the coffee house told me, ‘Chuck, I’m really sorry, but we’re probably not going to be able to buy your coffee anymore,’” says Chuck.

Had they left things there, the Jones Coffee Roasters of today might not exist. What saved them was their determination to at least give it a shot. Chuck asked the manager if it would be possible for them to put in a bid for Caltech. And lo and behold, they ended up winning the bid and started supplying coffee for the whole campus.

Chuck explains how they were able to stand out among the bidders. “I think the new food director at Caltech realized that if you have great local coffee [on campus], then you know you’re going to make people happy.” Being a small local vendor actually stood in their favor.

After winning the bid with Caltech, it became much easier to pick up other accounts, including the Jet Propulsion Laboratory (JPL) at NASA. Their reputation spread locally across California through word-of-mouth, landing them more restaurants every few months.

After a decade of roasting, Jones Coffee Roasters opened its first retail shop. in their warehouse. It was a small coffee bar located in their warehouse, and oddly enough, they couldn’t put out chairs because they didn’t have a seating permit from the city. This quirk became a catalyst for community building as the customers started bringing in their own chairs.

This early experience was significant enough that the Jones family ended up incorporating it into their current logo. “[Our logo] has two chairs, which are supposed to represent the chairs that people left behind at our store.”

Building on the success of their first location, they opened up a second store at Vroman’s Bookstore, a 130-year-old local institution in Pasadena. At the time of writing, they have seven stores in total––the revenue from these retail spots takes up approximately 10% of the business; the rest comes through wholesale.

Expanding to seven stores made it difficult to maintain steady cash flows. As the pressure to keep the business running smoothly increased, they hired a controller to reexamine their operations. “The first thing she did was to classify the different parts of the business––manufacturing, retail, and distribution,” Chuck recalls. “Once we [did that], we were able to better steer the business and make sure our cost of goods and labor costs were right for the different segments.”

Knowing the different classifications made it easy to implement them in QuickBooks Enterprise through the classifications feature, which they weren’t using before. “[It] allowed us to produce financials for each business component, segment, or class. We also have subclassifications for each of the retail stores,” Chuck explains.

As cash flow is the biggest challenge for Jones Coffee Roasters, being able to use the invoicing and ACH payment features on Quickbooks Enterprise helps take control of their cash. As the business now closes in on its third decade, it’s more important than ever to maintain a solid foundation to manage their accounting.

“QuickBooks Enterprise is the most user-friendly game in town, and they’ve been around the longest,” says Chuck. “They have all the support that you would need to get up and running fast.”

The key to sustained growth over 25 years in business

No business can survive for decades without community support. Like those early customers who brought in their own chairs and the small Caltech coffee shop that gave the Jones family a chance in the early days, loyal, local customers have been the biggest differentiator for Jones Coffee Roasters from the start.

“We were all there on the front line, talking to all the customers. Most of the people we already knew anyway,” says Chuck. “We were all part of the community, and when we went to the Jet Propulsion Laboratory, my parents and I were up there saying hello to people. You’re not going to get that from Starbucks.”

Operating within the community and embracing the local area is a Jones family tradition, dating back to their farm in Guatemala, which they travel to every year. Just as Chuck’s great-great-grandmother did all those years ago, Jones Coffee Roasters continues the family’s love of coffee and community.