Resource Center
December 2, 2019 December 2, 2019 https://quickbooks.intuit.com/r/news/is-recession-on-the-horizon-experts-tell-us-how-to-prepare-for-the-possibility/ News en_US Understanding what a recession is may not only help you prepare your small business for the potential, but also capitalize on your unprepared competition. https://quickbooks.intuit.com/cas/dam/IMAGE/A948gFgpV/Recession-on-the-horizon_featured-600x440.jpg https://quickbooks.intuit.com/r/news/is-recession-on-the-horizon-experts-tell-us-how-to-prepare-for-the-possibility/ Is recession on the horizon? Experts tell us how to prepare for the possibility Eric Carter
News

Is recession on the horizon? Experts tell us how to prepare for the possibility 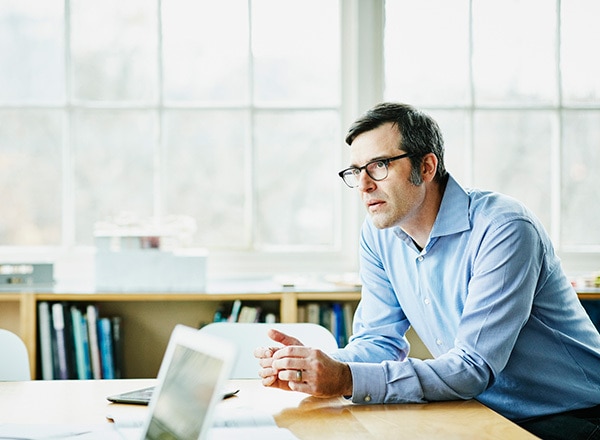 The spread of novel coronavirus during a bear market in the U.S. is forcing businesses to scale back, shut down, or close permanently. Some experts have suggested we’ve been on the brink of a global recession for years. Now, we very well could be on the precipice.

Whether a recession is looming or we’re simply in an economic pullback, what precautions can you take now to best prepare your business for a downturn?

What is a recession?

We all know a recession is generally bad news for the markets, employment, retirement accounts and most businesses. But, how do you define recession?

There is no single definition of recession. In fact, in its attempt to do so, the International Monetary Fund (IMF) admits:

“There is no official definition of recession.”

Instead of defining recession, the IMF describes symptoms of a recession. Other economists and institutions use a similar approach to define recession. Some generally accepted characteristics of a recession include:

Notice how the above list describes economic conditions. The list doesn’t quantify these conditions through impact or time variables. After all, a slight downturn in economic activity doesn’t necessarily mean a recession has started. So, how significant must the slowdown be, and for how long must it last, before a downturn can be labeled a recession?

When does a slowdown become a recession?

Many economists use a two-quarter economic output rule to flip a downturn to a recession. For example, the IMF uses Gross Domestic Product (GDP) as the economic condition, the two-quarter rule as the time factor and consecutive decreases as the impact factor.

Some economists argue that the IMF’s single-metric approach is too narrow. They believe that GDP misses elements important to economic health, such as employment rate, consumer spending and bond rates. Others find that a two-quarter rule is too near-sided to accurately capture the whole view of an economy.

Regardless of the methodology followed to define a recession, economies usually find themselves in the throes of a recession before everybody agrees the recession has arrived. To make matters worse, recessions go from bad to worse quickly, and businesses feel this pain.

If it’s possible to see a recessession coming, businesses could prepare for its effects. So, are we headed towards a recession? Let’s take a look at what experts are saying.

COVID-19 has already forced many businesses around the world to lay off employees to cover expenses and stint their losses.

For a small business owner this can have a dramatic, and often heartbreaking impact on a personal level, but it’s also important to pay attention to what’s happening on the macro level because it could be a sign of something larger.

“[I]f the unemployment rate (in the form of its three-month average) is at least 0.50 percentage points above its minimum from the previous 12 months, then the economy is already in a recession.”

When Sahm’s methodology is applied to historical unemployment rates, it accurately predicted the last seven recessions in the United States.

Where do we stand?

Currently, the Sahm indicator continues to be low at 0.07. For the majority of the current economic expansion, the number has been negative, so it’s growing. The Sahm indicator is not predicting a recession yet, but it’s worth keeping an eye on.

Many economists use manufacturing as a bellwether for overall economic health.

In the U.S. COVID-19 has already impacted the manufacturing industry by causing delays for Chinese imports, which were already in a slowdown before the virus struck.

A slow change in the global supply chain can have a dramatic impact on manufacturing around the world. According to this article from the New York Times the U.S manufacturing industry has shed 12,000 jobs in December 19th which is pretty significant in the eyes of The Institute for Supply Management.

A major benefit the ISM index has over metrics like the yield curve and unemployment rate is its broader look. The ISM index includes more variables and global supply chain elements that can capture recession-relevant data. It is also calculated at the beginning of each month without revision. Accordingly, it can be used as forward-looking instead of backward-looking.

Despite its multi-factor approach, manufacturing doesn’t play the role it once did in the US economy. The US, and much of the world, continues to transfer to a services-based economy. Accordingly, the ISM index may not be as useful as it once was. For example, the index fell below 50 in both 2015 and 2016, but the economy continued to expand.

Where do we stand?

The index reading for February 2020 is 50.1%. That’s a 0.8 percentage point decrease from January. According to the index, while production is growing, new orders and employment are contracting.

Further, supplier deliveries are slowing at a faster rate, backlogs are growing, while raw materials contract and customer inventories are too low. Contraction across many categories suggests that manufacturing is slowing. 50.1% is not terribly low; however, the index rarely falls below 45% without a recession.

A similar index, the China Claxin Manufacturing PMI, showed a sharp decrease in Chinese factory activity, coming in at a record low reading of 40.3 – a reading below 50 usually indicates contraction.

What does a recession mean for your business?

Are we headed towards a recession? Some indicators suggest yes, while others suggest not yet. Historical timing says one is right around the corner. Black Swan theory assures us, yes, but we have no idea when. What should you do to prepare your business for the next recession?

Did Ben Franklin really say, “By failing to prepare, you are preparing to fail.” Who knows, but it’s great recession planning advice. Think back to the symptoms of a recession. Three in particular should grab your attention in the pre-recession stage:

An overall slowdown in economic activity generally results in a reduction in business. Prepare for that, now. Don’t overextend your business with excessive debt, oversized overhead expenses and non-essential business expenses.

On the credit front, money is cheap right now. Interest rates are low and moving towards zero. A Danish bank is actually offering a 10-year mortgage rate of -0.5%. If you need to make purchases on credit, or mortgage a business property, lock it in now. Make sure you get into a fixed rate, so you don’t get burned by an adjustable rate if, and when, the recession arrives. Take advantage of the cheap money environment.

When unemployment rises, good employees look for work. Remember, unemployment spikes before recessions start. You might be able to recruit quality employees during pre-recession layoffs. Pre-recession planning will help you prepare for a recession; however, recessions also offer unique opportunities to grow your business.

The silver lining: business opportunities during a recession

How does a recession present a business opportunity for you? Take a look at some businesses that started during recessions:

What’s the secret to these recession-born businesses? The negative impact to consumers and businesses caused by recessions calls for creative and innovative solutions that aren’t necessary during periods of economic expansion.

Businesses are forced to reduce headcount and spending during recessions. Everyone needs to accomplish more with less. This opens an opportunity for innovative businesses to creatively solve problems. For example, Microsoft offered the PC as a cheap alternative to the mainframe computers, and the PC’s compute power helped replace formerly manual tasks.

Budgets tighten during recessions. Consumers and businesses, alike, need to save money during economic downturns. Businesses that can offer a quality product, while remaining price sensitive, have an opportunity to grow during recessions.

“The recession amplified our growth, plugging into a long-term trend of providing great food, fast and affordable—stealing share from casual dining and quick service, alike.

“Smashburger is a fresh approach to not just “better burgers,” but to the fast-casual segment as a whole. We will continue to set ourselves apart from the competition with not only award-winning burgers but signature chicken sandwiches, black bean burgers and salads that are as great as our burgers—all for around $8-10 and a 25-minute dining experience.”

Even massive, longstanding businesses feel the pain of recessions. When corporate giants weaken, the opportunity for new players in established industries arises.

For example, as the largest banks in history were failing, or being bailed out during the last Great Recession, an entire Fintech industry was born. Prior to the recession, big banks used lobbying power to keep financial startups at bay, or acquired them out of existence. The recession gave Fintech startups a chance, and now, big banks are struggling to keep up.

The online pet store competition of the dotcom bubble perfectly illustrates how a recession weeds out competition. Before the bubble burst, a new online pet supply store seemed to pop up everyday, such as Pets.com, Petstore.com, Petopia.com, PetPlanet.com and Petsmart.com.

Even though Pets.com managed to raise $82.5 million in an IPO and buy its largest competitor Pestore.com, it suffered from the same unsound business model that most of its competitors did, and was forced to liquidate less than a year after it went public. After the Dotcom Bubble burst, this niche industry cluttered with competition, narrowed to the few competitors that built businesses instead of catchy commercials.

Whether a recession or financial crisis hits next month, next year or five years from now, you will eventually run into a recession that will impact your business. You can prepare for that day with good business practices today. Then, when the recession arrives, be prepared to capitalize on the weakened competitive environment with innovation and quality.

This content is for information purposes only and information provided should not be considered legal, accounting or tax advice or a substitute for obtaining such advice specific to your business. Additional information and exceptions may apply. Applicable laws may vary by state or locality. No assurance is given that the information is comprehensive in its coverage or that it is suitable in dealing with a customer’s particular situation. Intuit Inc. does it have any responsibility for updating or revising any information presented herein. Accordingly, the information provided should not be relied upon as a substitute for independent research. Intuit Inc. cannot warrant that the material contained herein will continue to be accurate, nor that it is completely free of errors when published. Readers should verify statements before relying on them.

This article currently has 6 ratings with an average of 1.0 stars