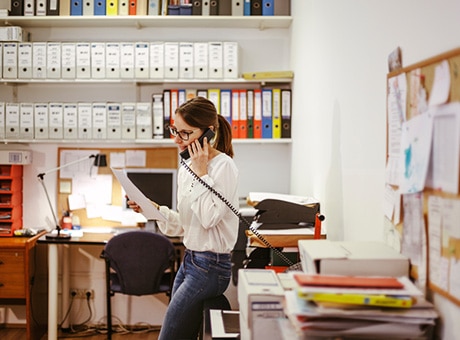 Money from friends and family is usually used to fund the earliest stages of a company, sometimes before you even have a prototype. It can be in the form of a gift, a loan or an equity investment in the business.

Whatever option you choose, everything should be recorded in writing (in many cases, a legal document). Spell out terms and conditions, so there’s no confusion. For example, lenders might assume their financial investment gives them a stake in the company or a voice in daily operations. On the other hand, borrowers may believe that it’s OK to miss the occasional payment since the lender is a friend.

It’s always advisable to present a formal business plan when pitching to prospective investors — even friends and relatives. The kitchen table pitch is really about selling yourself. Be frank about the risks and explain what the money will go toward and how it will grow your business.

The federal government offers some grants for small-business owners, but they’re designated for specific purposes, such as certain research and development projects or for businesses in rural areas. While government grants can’t be used to cover startup costs or day-to-day expenses and most aren’t earmarked specifically for women, they may be a viable option depending on the nature of your startup.

Competitions are events created for entrepreneurs with new business ideas who need seed funding. You present your idea and the need for investment.

Here are some of the competitions that are specifically geared toward female founders:

One of the more intriguing entries in the capital world is rewards-based crowdfunding. Crowdfunding is the practice of funding a business or product venture with many small contributions from a large number of people. This is normally done online.

How to Do It

Crowdfund by telling a compelling story on a platform like Indiegogo or Kickstarter.
Crowdfunding is the one financing option in which women outperform men. Research finds that women tell more compelling stories (than men) by connecting at an emotional level and that their community is more likely to support them. Because rewards-based crowdfunding gets a lot of buzz, it’s worth considering. Small businesses can borrow money for a period of time and make monthly payments that may or may not include interest depending on the nature of the loan.

Options are listed from lowest to highest interest rates

On April 5, 2012, President Obama signed into law a landmark piece of bipartisan legislation called The JOBS Act. It greatly expanded entrepreneurs’ access to capital, allowing them to go to the crowd and publicly advertise their capital raises. Title II, III and IV directly affect crowdfunding. (We’ll address each in the latter sections of this guide.)

Title III at a glance:

Here are some initial lessons learned. Equity financing is a method of financing in which a company issues shares of stock and receives money in return. Investors may earn a dividend, though they are far more likely to realize value from their investment when the company is acquired by another or goes public.

Equity investments can come from:

Having women investment decision makers is particularly important to companies that want to scale big through equity financing. The data shows people are more likely to invest in those who are like them. It’s called homophily. People of the same gender, race or ethnic group tend to associate and bond with each other. Gender is the strongest bond. So the good ol’ boys network isn’t just a saying, it’s a fact.

Angel investing is no longer a man’s game. Unfortunately, that isn’t the case for venture capital. Because the people who will use your product are likely to invest in an online public offering, Title IV holds promise for more women-led companies raising money.

Angel investors are accredited investors whose net worth is greater than $1 million (excluding a primary residence) or whose individual income exceeded $200,000 ($300,000 for couples) for the past two years with the expectation that the income will continue in the current year. These high-wealth individual investors play an important role in launching the future high-growth companies.

Once a man’s game, angel investing has started attracting more and more women — not surprising, since women are making and controlling a larger percentage of wealth these days. They are investing that wealth in each other, underwriting innovative products and services that rev up the economy. Women represented 25 percent of all angel investors in 2015.

As their name suggests, angels seem heaven-sent. They provide money, of course, but they also provide introductions to major customers, key employees and vendors as well as mentoring, strategic advice and additional funding.

Be prepared though. Most angels will likely want you to have a prototype before they invest. There are two ways to reach angels — online and offline, where there has been a greater effort on the part of local angel groups to reach and engage women in their communities.

How to Find Angel Funding

Here are some of the angel groups that either cater to women angel investors or invest in women-led companies:

There has also been a greater effort on the part of local angel groups to reach and engage women. The Angel Capital Association can help you identify a local group of angel investors in your area. It pays to attend local pitch and demo days since many angels frequent these. AngelList and TechCrunch are also good resources as they provide information on what some angels have invested in.

Title II of the JOBS Act went into effect on September 23, 2013. It allows private companies, at any stage, to market their securities offering to accredited investors (wealthy people) via platforms like:

This crowdfunding resource centralizes, streamlines, simplifies and shortens the process of raising money from angel investors. What’s more, it’s the least burdensome in terms of disclosure and financial reporting of the investment crowdfunding options enabled by the JOBS Act. For more on Title II, read:

As an example of how this Title II option works, Portfolia Funds invests your dollars across six to 10 entrepreneurial companies over 12 months, easily providing investors a diversified “portfolia” of young companies. Portfolia has attracted both women investors and women entrepreneurs because of its focus on consumer products, health, productivity, education and the internet of things (IoT).

Long the bastion of men, venture capital (VC) is an important source of funding for innovative, job-creating companies such as Google, Intel and FedEx. One in five U.S. companies currently traded on the stock exchanges received venture capital financing. These funds are for high-stakes players: less than 1 percent of companies raise money from VCs, and that typically comes after you’ve built the prototype and proven that the market wants your product.

But the VC world is homophily in action, as only 18 percent of North American venture-backed deals went to female founders in 2015, according to Pitchbook. Research by Babson found that one reason for the small percentage of deals going to women entrepreneurs is the small and shrinking percent of women investment decision makers at VC firms.

How to Find Venture Capitalist Funding

Rather than getting sand kicked in their faces, VC women have walked away and are building their own sandboxes. Since 2006, about 150 venture capital firms have been founded by women based on a list compiled by Pitchbook. Venture capital firms with women partners are three times more likely to invest in companies with women CEOs.

VCs that are female-founded but do not specifically target women-led companies:

Title IV, also known as Regulation A, allows companies to raise up to $50 million from unaccredited investors. Individual investments are capped at 10 percent of the investor’s annual income or net worth. Since online public offerings are complicated and costly to mount, only a few companies have raised money this way since Title IV went into effect in June 2015.

Crowdfunding platforms such as SeedInvest and StartEngine specialize in this kind of fundraising. This form of financing is for later-stage startups that have already gained significant traction in the market and have the money to cover legal and financial requirements.

Geri Stengel
Geri Stengel is founder and president of Ventureneer, a content marketing, market research and education company that helps organizations reach small businesses through thought leadership. She is an expert in women's entrepreneurship and crowdfunding. Read more