5 Handwriting Apps for Taking Notes on Your Tablet or Smartphone 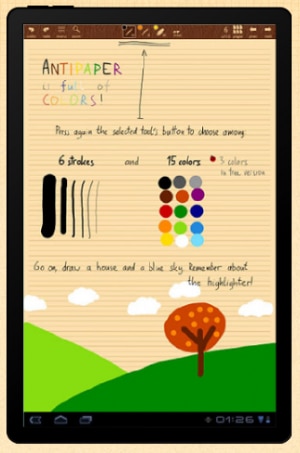 The funny thing about Evernote and other so-called note-taking apps: Most don’t support note-taking of the actual handwritten variety. That’s a shame, because discreetly jotting down shorthand during a critical client meeting trumps pounding away at an awkward virtual keyboard every time.

Fortunately for inveterate stylus lovers, a bevy of handwriting apps offer bells, whistles, and the ability to scribble all over your smartphone or tablet until your hand cramps. Here are a few worth checking out.

Notes Plus (iPad, $7.99): Few handwriting apps can top Notes Plus. Its powerful handwriting-recognition engine parses scrawl by fat fingers and slim styli alike, sharpens hastily drawn shapes, and enables you to edit notes or drag-and-drop whole sections to other areas. Notes Plus doesn’t skimp on the extras, either: It offers audio note support, sharing, PDF import/export capabilities, and automatic Dropbox synchronization. The only major downside is that it’s currently an iPad exclusive.

Penultimate (iPad, 99 cents): If you don’t need the extra features of Notes Plus, Penultimate is a highly regarded — and cheap — handwriting app that also happens to be an iPad exclusive. It lacks audio support, PDF import options, and multitouch capabilities, but the handwriting recognition is crisp and responsive. Like Notes Plus, Penultimate packs numerous note-sharing tools and plays nice with Dropbox. It also adds Evernote support, which compensates for its inability to turn notes into editable text, a major flaw of most handwriting apps. Exporting a PDF of a note to Evernote lets Evernote’s excellent optical character recognition technology shoulder the burden.

Antipaper Notes (Android tablets, free; $5.49 upgrade available): Not every tablet sports Apple’s iconic logo. Hordes of happy Android users say that Antipaper Notes is the best tablet-optimized handwriting app available for Google devices — and the basic version is free. The attractive-looking app mimics a real notepad and sports a wide variety of page and pen types. Writing appears quickly and flawlessly, but Antipaper Notes has some notable drawbacks: The number of pages is limited in the free version, and notes may only be exported as PNG or JPG image files (not PDFs) via email. (pictured)

PenSupremacy (Android, $1.49): PenSupremacy offers a little more flexibility than Antipaper Notes. The app works on Android phones and tablets, for one thing, and it can export PDFs of your notes via email, Evernote, Facebook, and various other means. The ability to import pictures into pages is another plus, as is voice dictation for audio notes. However, not everything is rosy in PenSupremacyland: Users say the app’s handwriting recognition can be sluggish and inaccurate, and there is no Undo option.

WritePad (iOS, $3.99; Android, $9.99): WritePad doesn’t even try to save your notes in shorthand. Basically, you scribble your notes on the screen, and when you pause WritePad converts them to text. Even better, the software adapts to your chicken scratch and grows more accurate the more you use it. The handwriting-recognition engine understands English, French, German, and Spanish, and text can be automatically translated into a dozen different languages. There’s even a built-in calculator. The more expensive Android version adds a WritePad virtual keyboard to your device that lets you hand-write emails, website URLs, text messages, and more, which the keyboard then converts to text. It’s all very intriguing, but beware: User reviews say the handwriting-to-text conversions are inaccurate until the app catches up with your penmanship. Customer service and Android device support can also be hit-and-miss.

This is only the tip of the handwriting-app iceberg. Which apps do you prefer? Do you even care about taking notes in shorthand? Please share your thoughts in the Comments section below.

QuickBooks Whether you've started a small business or are self-employed, bring your work to life with our helpful advice, tips and strategies. Read more