1. On sending the authorization form, getting the attached error. When will this be fixed? 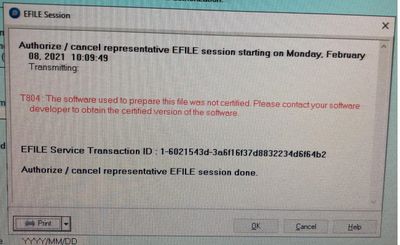 Profile marked this resolved saying that they are aware of the issue and no time frame to resolve.  This again shows Profiles lack of ability to stay on top of CRA changes.

This is unacceptable that other companies that do not have Profile are not having these issues.

When I called CRA this morning, they flat out told me this was a Profile issues, when I called Profile, they were unaware of this issue, first trying to tell me that CRA was still doing maintenance and that is why the system was not able to processes the Authorizations.  I kept insisting that CRA said it was Profile issue, after about 35 minutes she conceded that it was in fact a Profile issue, she told me it would be resolved mid to end of the month at first. When I said this was unacceptable and I wanted to speak to someone higher up, she said to keep an eye on the community for time frames of when it would be resolved.

We are now getting a Profile error on the AUTH page saying that CRA is not accepting these forms .. what they did not say is that this is only happening in there software.

UPDATE.. I just talked to someone at DTMax and H&R block, they are having no issues with processing Authorizations Forms, this is solely a Profile Issue.

I contacted DTMax the cost is $1146.00 + tax to get a version so I can do authorizations and all our clients do not walk out and go to Block.  I will try and recoup this cost from Intuit.

We are getting an error message "T859: You have submitted an incorrect form version" when I try to authorize a new client. We can't wait until mid-month to have this corrected. We need to be able to work on new client files.

Can we please get a response/update from you on the issues identified in this thread:

2. T859: You have submitted an incorrect form version

Kindly provide a ETA on the fix.

This issue is resolved. You should not find this issue filing for an authorization at this time.

I apologize for the inconvenience but hope this helps