Changing the role of accountants to trusted advisors – a case study

Are you an accountant? Are you concerned about digital disruption and how it will affect your business? Read this case study to learn how to ride the change.

The blogosphere is full of it.

Some people are calling it the “Fourth Industrial Revolution” and it’s the effect of increasing digital automation and machine learning on the workplace that appears to be happening around us in real time. And globally.

Put simply, automation is disrupting the way we work. And unlike in previous times of change, it’s not just blue-collar workers who are affected. It’s also people with professional qualifications.

According to PwC, a third of existing British jobs are at risk of being taken over by robotics and artificial intelligence (AI) by 2030.

And one of the professions that will be affected most by automation?

You’ve guessed it. Accountants and book-keepers, who can expect up to 98% of their work to be automated in the next few years.

Now for the good news

The same article stresses that the disruption caused by artificial intelligence won’t necessarily result in job losses. Its author, PwC’s Chief Economist John Hawksworth, is a lot more optimistic than that:

“The UK employment rate is at its highest level now since comparable records began in 1971, despite advances in digital and other labour-saving technologies.”

So, accountancy firms don’t need to worry then?

He doesn’t go quite that far. His point is that, rather than roles disappearing, they’ll simply (need to) change. And the very technology that appears to threaten the accountancy profession can also help to scale this change, adding more professionalism and productivity to the mix.

Opportunity, as they say, is knocking…

Alice Morgan is a digital marketing professional who’s really interested in AI and automation. She says her own professional life has changed beyond recognition, too, but that’s not why she talked to us about her experiences.

“I love working with clients and producing great work for them, but – hands up here – I’ve never been a real fan of the admin side”.

For years, she admits her approach to managing her business was to chuck all her receipts in a box and hand them over periodically to her accountant. She did send out invoices on time, but – because she was using an Excel template she made herself, “I made mistakes which meant invoice payments were delayed and my cashflow was terrible.”

You get the picture. A business owner who likes to delegate and shies away from compliance and tax discussions. “Not my thing”.

Be a valued business advisor

Help your clients spend less time on business admin and more on development thanks to QuickBooks cloud accounting. 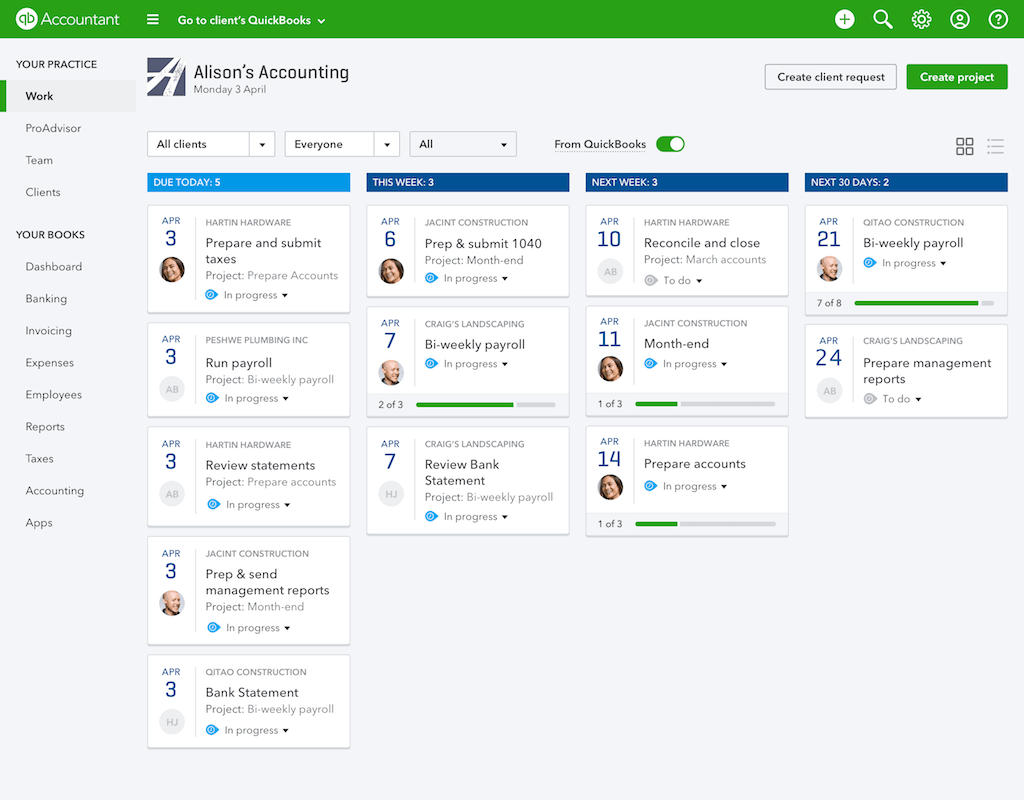 Years ago, when it came to choosing her accountant for her small limited company, she had two criteria: - “are they cheap?” - “are they near to me? (because I’ll need to drive my box of receipts over and I don’t want to go far)”.

The choice Alice made was not ideal. It turned out it was a real old-school accountancy firm and the monthly retainer was essentially paying for someone to enter figures into a ledger. There was little-to-no attention paid to helping her grow her business and – as she found out almost certainly to her cost – almost no attempt to give her good tax advice.

“I finally came to my senses and parted company with them.”

What made her make the switch?

A phone call from another accountancy firm who in fact turned out to be another small business owner like her. “What the voice on the other end of the phone said made me sit up and listen”, Alice says. “I woke up to the fact that I needed an accountant who could support me and help my business grow – not do my expenses. I had never thought I could afford the services of a business advisor, but I realised that the QuickBooks accounting software actually frees up my accountant to be just that. It automates all the manual stuff I was paying my old accountant to do. Of course! I saw the light and I knew I needed to change what I was doing”.

She agreed to a meeting, then did all the vetting. Once satisfied she was dealing with someone she could trust, she signed up.

It’s been over a year now and – for the first time ever – Alice says she takes an active interest in her business affairs. “I enjoy being in control.” It would, perhaps, be an exaggeration to say that she loves poring over cashflow, P&L and other financial reports but she does at least take them in and see why they’re important for her company’s growth plan.

As for invoicing? “It takes a fraction of the time it did before and I’m now 100% accurate”.

She’s keen to stress that the burden she’s referring to is purely an administrative one. She pays the tax she owes!

But it was the admin she hated. And the thing she used to dread most was not knowing what her annual corporation tax liabilities would be in advance. “My old accountant could never give me a running total.”

That’s all changed now and the last time it was due, not only did Alice know what she needed to set aside, the process of paying it was seamless. Her accountant handled the whole thing digitally.

Alice is the first person to admit that she does a lot of the work her previous accountant did for her. But – thanks to QuickBooks – it’s easy, quick and she’s more hands-on as a result. “More importantly” she says, “I’m more accountable to myself, too”.

While her new accountancy firm is no PwC, it is clear they have embraced the digital age and the new technologies and ways of working that go with it. What’s more interesting perhaps, is that it’s clear they’ve become her trusted advisor in a way that – years ago – a bank manager might have been.

If you’ve found this case study interesting and useful, check out the other blogs we’ve written to support accountancy firms in the UK.

You may also enjoy reading

Get the latest tips, advice and resources straight to your inbox to help your business thrive.