Our accountant made some errors last year and basically sometimes took out and paid 401k company matches for employees without the employee contributing anything to the 401k for the pay period.  So as a result we have a forfeiture account with our 401k investment company which is basically holding the money that was put in by mistake until we choose to assign it to an employee's account as a match.

I have payroll set up so that all of the employees which participate in 401k each pay shows a 401k employee deduction as well as the 401k company match attached to it.

From my last payroll, I still did all of the regular payroll deductions for 401k plus the company matches.  However, when my husband sent the funds electronically to the investment company, the employer match was actually taken from the existing forfeiture account with  the 401k company instead of out of the bank account.

So while I will use the employee 401k contributions liabilities to put toward the payment when I record it, I am still left with the 401k company match liabilities that are still showing that they need paid somewhere.

I am wondering how best to handle this.

----So one problem:  is there something I can do with these liabilities?

-----The other problem is:  The 401k company matches are going to show up as an expense this month which technically they shouldn't as these would have already been expensed to the company last year when the extra money was paid as a company  match by mistake.

I thought of several possibilities but not sure how to do one and not sure if the other is a correct/legal way to record it.

One option I thought might work would be that since there is another pay in April, I could just remove the additional  401k company matches attached to that second pay for each employee, and then when I submit to the investment company just not use the forfeiture account this pay and instead submit the money which is showing up in liabilities owed from the previous pay.   That would solve the problem of it being expensed this year again.  However, I am not sure if it looks badly to not show a company match attached to a payroll for a particular pay.

Or is there some way to show this forfeiture account in my chart accounts and then I could put the liabilities toward that somehow?  However that wouldn't solve the double expense issue.

Any suggestions are appreciated.

Here is how I would handle it.

Since you claimed the errant match in 2019 as an expense and you do not wish, I assume, to change an already filed income tax return you will have to temporarily record the balance in the account as current income, then re-expense it again this year.  (if you have not filed taxes yet why not just change the expense to a paid on account current asset)

Now create a cash clearing bank type account if you do not have one already. Deposit the 401k balance amount into this account. When you submit payment and the match is deducted from the balance you record the employer liability coming from the clearing account and not bank account.  Since QB records liability for employer and employee separately it should be straight forward to pay each from different sources inside QB.  As you run each payroll this year the employer match is being calculated as both a liability and an expense. That is why you have to reverse (or void) the expense form last year

Invoice and Sales Form Basics
When business is going well, that means invoices and sales receipts are bei...
Read more 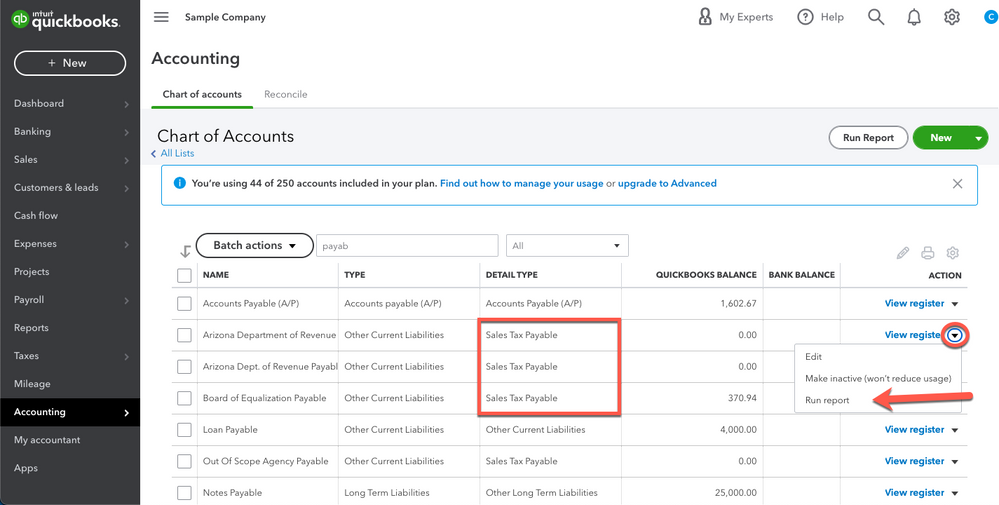 New Top 5 Questions: Sales Tax
Hello QuickBooks Community! As you can see, we’re back with another Top 5 a...
Read more