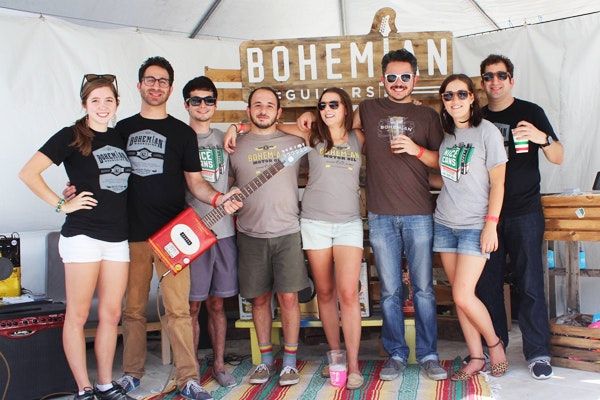 We couldn't help but be curious when we heard that brothers Adam and Shaun Lee quit their day jobs to make oil-can guitars. We had to hear their story.

Like many entrepreneurs, they decided to run a Kickstarter campaign to help them get their company, Bohemian Guitars, off the ground. Never in a million years did they guess they would raise 168% of their original goal, or struggle with fulfilling the perks they promised their backers. Here they share with us their lessons learned running a crowdfunding campaign and partnering with famous musicians like Hozier.

We'll let Adam and Shaun take it from here... 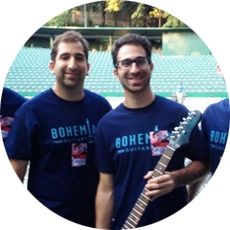 You both grew up in Johannesburg, South Africa. How did you end up starting Bohemian Guitars in Atlanta?

Johannesburg has one of the highest crime rates in the world, so our parents moved us to Atlanta when we were 10 and 12. We both went to college and pursued our own careers in project management and clinical mental health. Yet, we weren't really crazy about our day jobs.

In 2012, we visited our family back in South Africa and happened to see a street musician creating guitars out of old oil cans. This inspired Shaun to start building guitars in our parents' basement and selling them on  Etsy. As demand grew, we moved to selling at arts and crafts festivals, and teamed up to manage the business.

We kicked off a Kickstarter crowdfunding campaign and when it immediately did well, we knew we had something and went all in.

Why did you decide to try Kickstarter? Any surprises along the way?

Adam went to a music conference in San Francisco and people kept asking him, "How much have you raised on Kickstarter?" We didn't know what Kickstarter was. Once we looked into it, it sounded like a great idea. We spent 4–5 months writing up a plan and launched a campaign.

Initially, we emailed our list of around 1,000 people to get the word out. Turns out that wasn't necessary, because we got picked up by the press organically and featured on Kickstarter's front page. Our original goal was to raise $32,000. We ended up raising $54,000.

In terms of surprises, we learned the hard way the importance of planning beyond the original goal. Fulfilling what we promised our backers was quite difficult. Even after planning the page layout and the perks, we didn't anticipate a lot of other things, like the packaging costs, handling insurance and manufacturing.

We needed a manufacturer for the campaign. Yet, we didn't have the money to pay one. When we finally found one overseas, we realized we had to find somebody versed in customs documentation so we could import everything we made.

For example, one of our shipments was in a container with someone else's packages. Turns out, those packages were violating some regulations, so all of our stuff got delayed for *two months.*

Even though we thought we had all our ducks in a row and it was going to be easy, stuff like this popped out of nowhere and it became really frustrating for our Kickstarter backers. 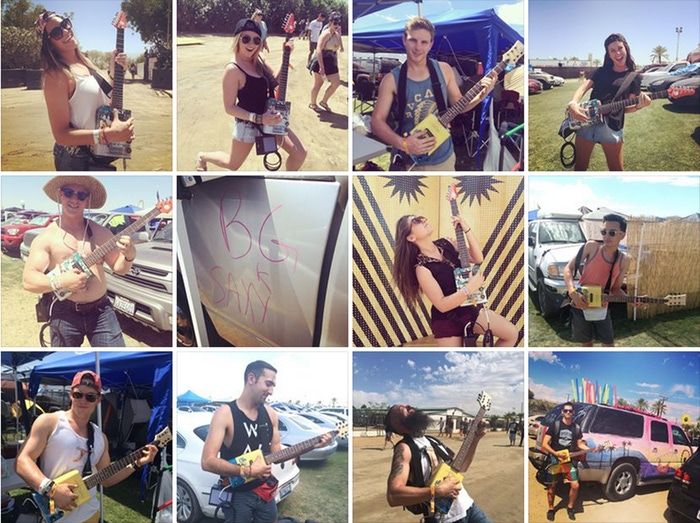 How do you think about your customers? What do you do to keep them coming back for more?

Our customers and supporters fit into three different levels: the superfan is an average guitarist who's very supportive, the influencer already has a decent following that can help us grow and the celebrity who is famous (like Hozier, who is one of our clients!).

We recently launched  #TeamBoho, an ambassador program where our fans can chat about guitars and earn freebies. We believe it's really important to support early adopters and keep them in the loop.

We also host local jam sessions monthly, where random people from the community gather to make music. People like it so much that we've even had ambassadors ask about starting jam sessions in other cities.

We have to ask. How the heck do you decide how to price an oil-can guitar?

Our market's actually larger than bigger guitar brands, because we're way more affordable and have ins with the art community. One art gallery already has a Bohemian Guitar hanging on their wall!

Pricing is our biggest struggle, though. People worry that our guitars won't work as well as normal ones, which are vastly overpriced at around $2,000. Right now we're working on how we can challenge people's assumptions about what makes a quality guitar by selling ours for a quarter of the regular price and getting our existing customers to advocate for us – especially with influential community members like Hozier.

After your Kickstarter campaign, how have you found new customers?

We learned through trial and error that ads for instruments in guitar magazines aren't very effective. Musicians want to hear the guitar first. So, instead we visit live music events and festivals like Coachella and let people play our guitars in person. We've also tried running targeted ads on Facebook and we use Google AdWords to drive traffic to our website via search keywords.

Our biggest marketing efforts go into social media, because that's where we see the best potential. For example, when someone comments on one of our Instagram photos, we use the direct message feature to send them a coupon code. It makes them feel special compared to all the other commenters!

And that's a wrap! Thanks to Adam and Shaun for sharing their story. Now it's your turn...

Have *you* ever experimented with giving your social media fans a discount? How did it go?

Adam and Shaun found that connecting with their fans on Instagram and sending commenters coupon codes is a useful tactic for getting new customers.

What is *your* experience with coupons or discounts?

Does anyone here have experience with giving your social media fans a discount? How did it go?

In early spring I organized a fantastic "Moms & Mimosas" shopping event complete with brunch and a bellini bar. Ticket sales were great - until a massive snowstorm forced me to reschedule and a bunch of moms wanted their money back. I posted on my Facebook page encouraging moms to tag a friend they'd like to bring to the event and offered all those who commented a BOGO 50% deal on the second ticket (my primary revenue stream was the table fees from vendors anyway). The post got a ton of comments and shares and really helped advertise the rescheduled event. It was a pain to PM each commenter with an individual promo code but at least it got moms in the door, which is what the vendors were paying me for in the first place.

Track your spending: Manage your expenses, bills, and vendors
This is a Zoom webinar,you must sign up on Zoomto attend. Follow this link ...
Read more