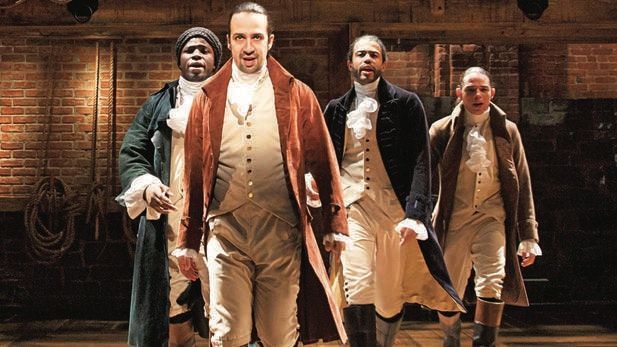 Last year, Hamilton took home 11 Tony Awards including Best Musical, Book and Original Score. The hit hip-hop musical about the Founding Fathers is groundbreaking not just because of its unique story and musical style. While classic productions like Phantom of the Opera and The Lion King each claim to have grossed $6 billion worldwide, Hamilton has a clear path to becoming a billion dollar business — and it’s only in its first year.

This is the story of how they took a creative project and turned it into an unexpected success.

After picking up a copy of Ron Chernow’s Alexander Hamilton biography while on vacation, Lin Manuel Miranda began a six-year labor of love writing the lyrics and music for what would become Hamilton.

The musical made its Off-Broadway debut to a sold-out crowd at The Public Theater in February 2015 before moving to the Richard Rodgers Theatre in August of 2015. On Broadway, it was ecstatically received from audiences and critics alike, winning a Grammy for Best Musical Theater Album, the Pulitzer Prize for Drama and hosting high-profile audience members like the Obamas and Beyoncé.

What is the Hamilton recipe for turning a show about a Founding Father most people have barely heard of into a record-breaking hit?

Keep costs low as you test and refine the product.

In business, we call this building a minimum viable product. For the Hamilton cast and crew, it meant workshopping the songs for audiences first at theater festivals, then at The Public Theater, a smaller venue known for taking chances on new and interesting productions (in return for equity) before they head to Broadway.

Choose a small team and let them share in the wealth.

By offering early cast and crew members equity in the show, the team behindHamilton could perfect their performances at a relatively low cost. When each person in a smaller team is committed to making an epic contribution, you can actually save money by not having to pay a giant team of cogs. And when your whole team is invested financially in the show’s success and aligned with the same main goal, you’re more likely to get incredible results — like the spontaneous #Ham4Ham performances that serve as yet another free marketing tool for the show.

“This is not a moment, it’s a movement.”

I promised myself I wasn’t going to rip off any of Mr. Miranda’s lyrics, but they’re just so dang good. And so is his approach to marketing.

It’s common for many creatives to separate themselves from a single piece of work. They don’t want to be pigeon-holed or have one project define them, but Lin Manuel Miranda, the show’s creator, does exactly the opposite and turns Hamiltoninto more than just a musical via his tweets, State of the Union memes, late night talk show appearances and his perfectly cultivated friendships. Hamilton is the embodiment of diversity, equality, freedom and, ultimately, the optimistic voice of the American people.

There is no issue that the cast of Hamilton isn’t empowered to take on through their personal and production social media accounts — from feminism to public performance art to affordable ticket prices and even gun control.

The cast of Hamilton acts as the modern interpreters of the Founding Fathers intentions and take a stand on many politically charged issues, earning themselves loads of popularity and publicity in the process.

Strike while the iron is hot.

Hamilton is raking in the dough at the Richard Rogers Theater — with profits upwards of $600,000 each week. While Lin Manuel Miranda, the producers, cast, crew and even Mr. Miranda’s father are cashing in on the current profits, when the show grows beyond New York with upcoming tours and royalty deals, the profits will begin to multiply.

Today, showgoers pay an average of $872 per seat to see the hottest show on Broadway. By taking advantage of the show’s popularity and moving quickly to open Hamilton in Chicago, San Francisco, Seattle and London over the next few years, the production will also be able to capture top dollar in each new city. Even better? In each of these cities,  Hamilton will play to larger theaters than the current 1,300 seat house in New York. More seats = more ticket sales.

While, Hamilton's profitability is far from guaranteed, there are many great lessons to learn from the marketing geniuses who turned a rap about a Founding Father into a billion dollar franchise.

Inspired by how the cast of Hamilton turned the business of Broadway on its head, we want to hear from you:

How can *you* think outside the box to grow your business or increase profits?

If you have a story, we want to hear it! Share your strategies for wild success right here in the comments below.

To think outside of the box, you need to get outside of your comfort zone. I do really well coming up with new ideas when I workout or travel to new places, take a long road trip and, oddly, when I am really tired. I like to write in a journal at the end of the day to get ideas off my mind and onto paper. If the idea keeps popping up in mind, there is probably something to it. If I forget about something until I reread the idea a month later, it's probably worth passing on.

If you had a superpower, what would it be and why?
We're having fun with a lighter topic this week... superpowers! Everyone ha...
Read more

Great > Good
Good Friday afternoon, Community! It's great to have you back here in the B...
Read more