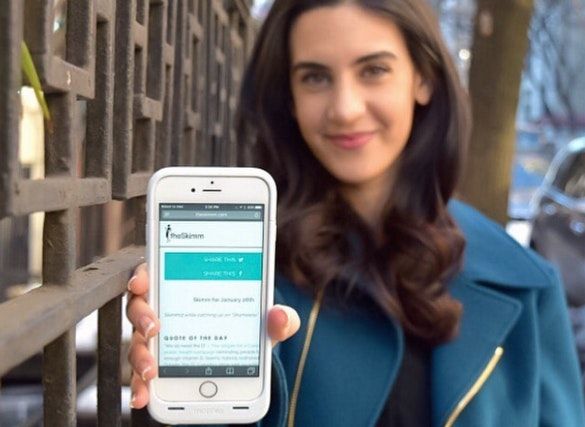 Let’s get this part out of the way: I think theSkimm is amazing. Full-on brilliant. If you’re a woman in her 20s or 30s, chances are you’ve known about theSkimm for at least a few years now. If you’re anyone else, expect to start hearing a lot more about these women very soon.

Back in 2012, when Danielle Weisberg and Carly Zakin sent out the very first edition of theSkimm, it’s hard to imagine that either could have predicted how exponentially successful their daily newsletter would become. Nearly four years later, over 3.5 million people (us included) look forward to starting every day by reading theSkimm’s sharp, deliciously on-point recap of the news. Even Oprah and Reese Witherspoon have pledged their allegiance to what Weisberg and Zakin have created.

Taking an idea from zero to 3.5 million is no small feat. So how did they do it?

We decided to dig in and find out exactly how these entrepreneurs turned on the gasoline in their business without breaking the bank. These takeaways can be replicated on your blog, in your email newsletter and in your own business.

theSkimm began with a single promise: we make it easier for you to be smarter. They kept their copy simple and perfectly nailed the benefit in two sentences:

The Daily Skimm is the email newsletter that gives you everything you need to know to start your day. We break down what’s going on in the world with fresh editorial content.

It’s no coincidence that they also kept the product simple, foregoing any fancy bells and whistles in favor of testing out their idea as an email that landed in inboxes every day at exactly 5:59am.

Armed with a clear mission and a delivery method anyone with two thumbs could rock, Weisberg and Zakin took their fresh, Reader’s Digest-esque spin on the news and delivered it to one very specific audience: professional, 20-something women.

It’s pretty clear at first glance that theSkimm is aimed at a specific person, at least to start.

If the look and feel didn’t make it clear who theSkimm was for, the voice and style of their writing certainly did.

theSkimm could have tried to be the newsletter that moms, dads, college kids and grandparents could all agree on. But instead, it speaks directly to only one person: a young woman who wants to sound informed when she talks about current events at work, at cocktail hour or out on a date.

“The idea behind the newsletter is that it sounds like your best friend giving you what you need to start your day and be out the door in five minutes.”  —  Danielle Weisberg, co-founder of theSkimm

Pop culture puns, quirky headlines and to-the-point storytelling separates theSkimm from anything you’ll see on CNN.com or in The New York Times. 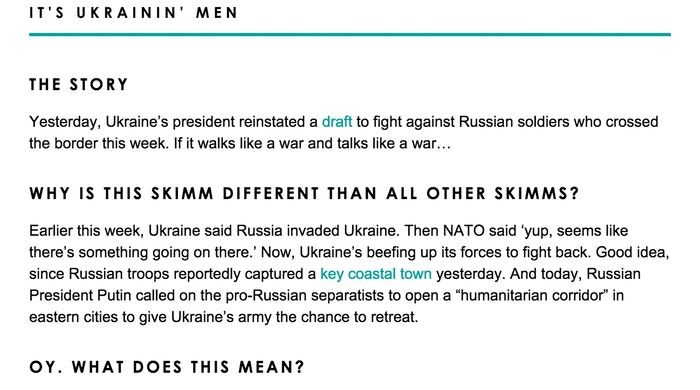 After just one week of sending daily emails, Weisberg and Zakin got feedback from their friends and friends of friends that it was working: they’d hit on the right idea (and execution) with the right crowd. After a few more weeks, they knew they were onto something big when they asked early fans to share theSkimm and subscriber numbers spiked.

By 2012, the days of people uploading their address books to invite everyone they knew to every new service or app were over. Sharing was the new mass invite, but how could they get their audience to share theSkimm enough to break out? Rather than fork over thousands of dollars on ads or a PR campaign, the women behind theSkimm decided to try out something a little more radical.

They turned a small group of passionate people into one of the most successful referral campaigns.

A community of ambassadors = the new growth hack

Weisberg and Zakin recognized quickly based on early feedback that their subscribers were ready to write the kind of love letters that most businesses only dream of getting. Without straying from the no-frills model they’d already established, they rolled out a dead-simple program that turned their most loyal readers into an army of devotees.

They didn’t just give subscribers a personal referral code and a way to track their referrals, they gave their most passionate subscribers a name, an identity and a community of other passionate women just like them.

2. Fall in love with it because you feel like your best friend is giving you a mental high-five every morning when you open up your email.

3. Grab your custom referral link or use their handy invite page and borrow any one of the tailor-made messages that have already been written for you. Share the love far and wide.

4. As you refer friends, you not only get fame and glory, you also get small perks: free swag, access to special events, opportunities to collaborate directly with the team, even a birthday shout out in the newsletter.

5. Once you refer 10 friends, you’re officially a Skimm’bassador.

Today, Skimm’bassadors are charged with representing theSkimm in their local communities and helping the brand grow through word of mouth. In return, they get a lot more than just the opportunity to show off a fancy tote bag or a Skimm-branded iPhone (to be fair, their iPhone cases are pretty sweet).

Weisberg and Zakin realized there was an opportunity to create something much bigger than just a daily email when Skimm’bassadors formed their own tribe and started hosting meetups (in its first year, the program grew from 200 members to over 6,000). The promise of meeting other women like themselves — not to mention the cachet that came with being a Skimm’bassador — was the secret sauce that turned a simple newsletter into a movement.

The numbers speak for themselves. At last count, there are currently over 13,000 Skimm’bassadors and the founders estimate that almost 20% of their overall growth over the last 3 1/2 years is directly credited to the relentless efforts of their super fans who love spreading the word. 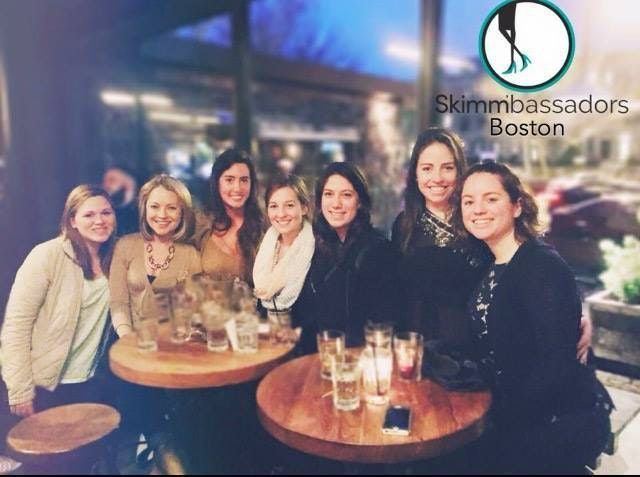 Skimm’bassadors meet up in cities across the country at Sip & Skimms. Photo courtesy of theSkimm’s Facebook page.

In an era when companies big and small are competing for every last second of our time, it’s awesome to see how theSkimm is inspiring millions of women to meet each other in their very own community.

The journey from zero to 3.5 million starts with making a few key decisions upfront

Three takeaways stand out to us from theSkimm’s successful leap from simple newsletter to thriving community. If you have a brand, a blog or a business, these same lessons apply to how you think about creating your own breakout success:

1. Identify a clear mission and who you AREN’T serving upfront.Businesses in 2016 can’t go broad early and survive. By picking a specific niche, knowing exactly who you’re serving and — even more importantly — who you’re not serving, you can create the initial love you need to ultimately breakout. When you think about your market, can you picture a specific person who loves your brand? What makes them unique or sets them apart? If you can’t see them, you may need to go back to the drawing board until you can.

2. Build your brand one person at a time. theSkimm brilliantly captures the attention of their readers by writing to a single person in a voice that feels intimate and immediate. If you want your followers to fall in love, you have to speak to them directly, one person at a time.

3. Keep it simple. Custom software development and fancy plugins might feel like a necessity, but theSkimm proved that simple ideas delivered with the right intention just need to get in the hands of the people who can benefit from them the most. If that means testing out your great idea using a free MailChimp account or setting up a free community that can later grow into something bigger, do it. Focus first on who you serve and what value you bring with the least distracting MVP (minimum viable product) that you can. When you get the basics right, you can always add the bells and whistles later.

Here are three specific questions to get you started:

Who are the people that LOVE — not just like — your brand? Why do they love it? For theSkimm, they zeroed in on exactly who their army of ambassadors could be when they decided to go after millennial women and talk to them as one knowledgeable best friend to another really busy one.

Where can you find more of these people? If your early fans are telling you how much they love what you offer, tap those folks first to see if they can help you cultivate more fans. Weisberg and Zakin wrote back when their early fans sent them feedback and asked each person to share theSkimm with five friends. Guess what? It worked.

How can you reward your ambassadors with more than just material perks? Discount codes are great and everyone loves free swag, but your most loyal members will value the identity, status, recognition and relationships they have because of you. If you have the opportunity to introduce your ambassadors to each other (via informal gatherings, feedback sessions or even a place where they can learn from each other), that kind of reward will pay off indefinitely.

Now, it's your turn!

Tell us: How do *you* encourage your best customers or subscribers to be ambassadors for your brand? Have you rolled out a referral program or rallied your biggest supporters to share their feedback with you?

This is such a wonderful business these entrepreneurial women created together. I just subscribed and am looking forward to something new every day!

I read it every day! Since their target are millenials, and I'm not a millenial, it makes me feel 25. But besides that, it's awesome information put into a really fun-to-read format. I love it!

That's awesome, Leslie! It's great to hear from another voice in the news media that's more light hearted and fun.