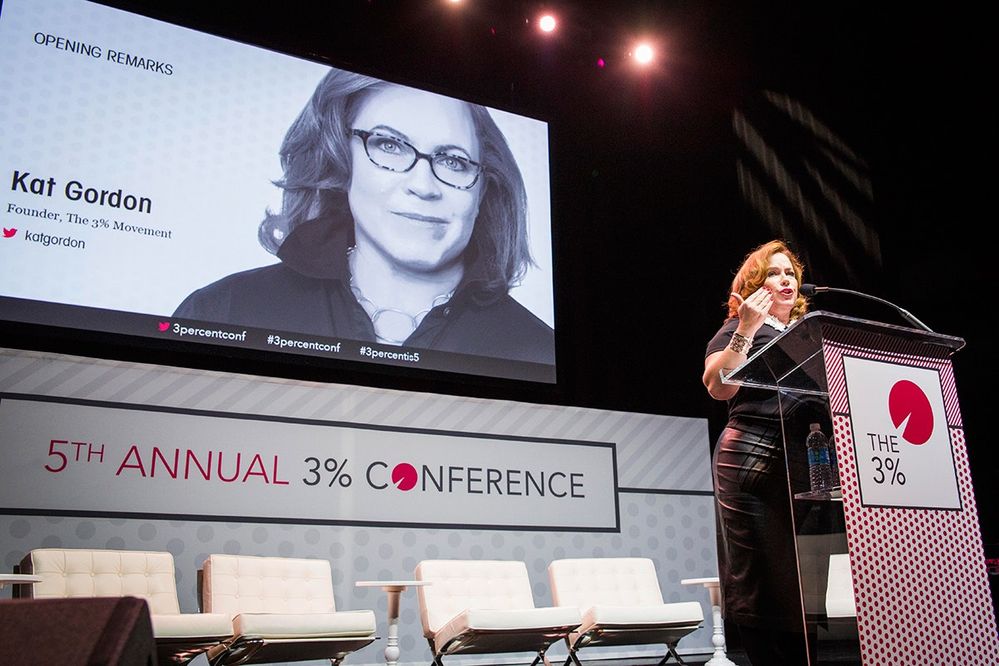 Recently, we were honored to have the opportunity to interview rockstar entrepreneur Kat Gordon — founder of The 3% Conference and a true inspiration for women in business around the world.

Kat created The 3% Conference when she realized that only 3% of Creative Directors were women, despite the fact that women control the majority of consumer spending and social sharing. The conference teaches men and women in agencies and on the client side how to address these issues in new ways, and it offers something that has been sorely lacking for female creatives: a sense of community.

She has been called the “triple threat” of an entrepreneur — ad woman + marketing maven + women's expert — and she was named one of 2013's "Top 10 Women to Watch" in Advertising Age. We chatted with her about knowing when to ask for help, the value of mentorship and why nailing your one-sentence pitch is key. 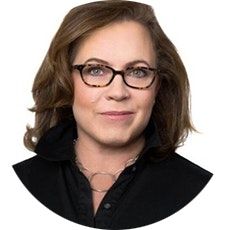 Tell us a little bit about your background and what inspired you to launch your business!

My background is in advertising as a Creative Director. I worked in advertising for 25 years and the higher up I got, the more I became keenly aware of how few women there were in creative leadership roles. There was better representation in other departments like media and account management, but on the creative side the leaders were typically men.

I became really fatigued by knowing what the consumer marketplace looked like with so much of tech adoption trending toward women, while my industry leaders were still very stubbornly male. So, I decided to create a community and conversation around it.

I didn't know that it would take off as dramatically as it did! 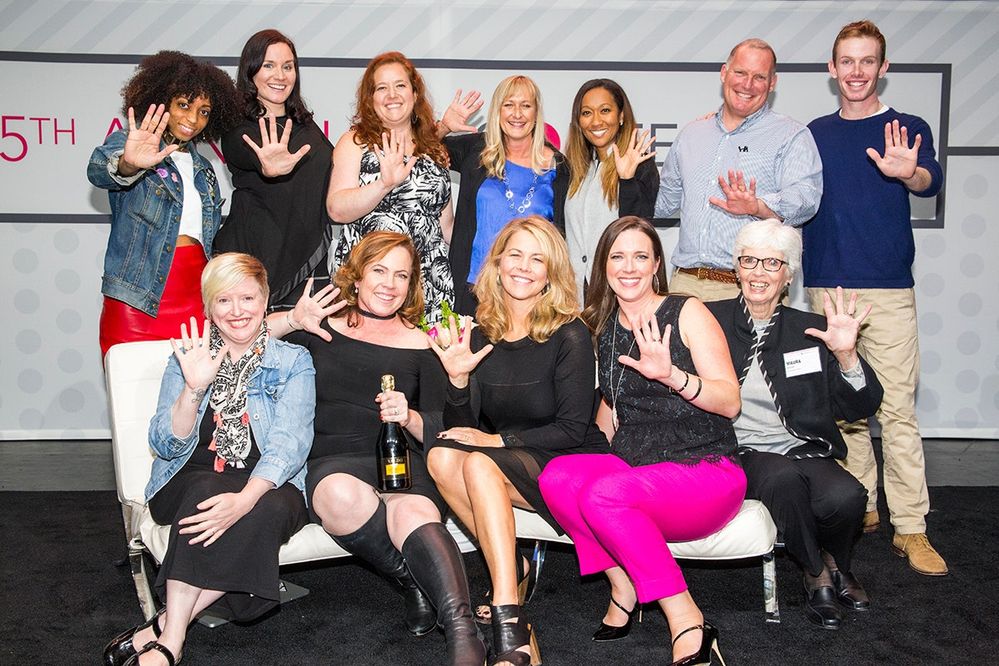 When did you know you were on to something? Was there an exact moment when it all started to come together?

I took some micro actions along the way that gave me the green light to keep doing what I was doing. For example, when I first came up with the idea for the conference, I created a Survey Monkey form and sent it to 50 women in advertising. I asked them, "Would you come to an event like this?" I also described some of the topics we might tackle and the agenda for the event and asked, "Is this of interest to you? Who do you think should sponsor this?"

I got a resounding YES in response to my survey, so I took that as an indicator that I should keep moving forward.

During the first year, I also managed to land a couple sponsors. When you're just starting out, you don't have a lot of press or any demonstrated success. When each of our first sponsors came forward and said, "Yes, we will give you money," that was another indicator for me that this was something probably worth doing.

After our very first conference event, we pulled out ahead and made money, which is very unusual. Not a lot, but enough to keep going.

Did it take some time to narrow in on your messaging for the conference?

Even as a copywriter myself and a marketing professional, it was a challenge to come up with our one-liner. My whole job is doing that for companies! The one thing I will say is that the one line you choose to describe yourself with will likely change over time, and that's okay.

In the beginning, our tagline for The 3% Conference was "The First Ever Event for Female Creative Directors." Then, in year two or three, we changed it to "Championing Female Creative Leadership."

Now, we're "Diversity = Creativity = Profitability." We decided to go with only three words and make it even shorter.

For us, we started to realize that what we were doing had legs and applicability in the world. We started to widen our lens as we realized the broader impact that we were having on the world with our events.

When you were starting out, did you have a mentor in your field? If so, how did you go about developing that relationship?

Through mutual friends, I was introduced over email to Nancy Hill, who is the President and CEO of the 4A's — the American Association of Advertising Agencies. We had a long conference call together, where I told her what I was planning on doing. She listened carefully for things I don't even think I realized she was listening for, and she got behind my idea. The other woman who has been a real champion for what I'm doing is Cindy Gallop, another influential woman in my industry.

I didn't know either of these women when I was starting out. I hadn't worked under them, I hadn't demonstrated my value to them. But, I was able to talk to them both about what I wanted to do with such passion and specificity that they realized immediately there was value in what I was doing and they stood behind me. Their support was really critical.

If you could go back in time, is there anything you would do differently when you were just starting out as a founder?

I would ask for help much sooner. I was definitely someone who was slow to realize how fast the business was growing and how tough it was to keep up and still do everything that needed to be done. Before the second year of the conference, I even considered announcing that we would only to do it every other year, just because it was so tiring to manage everything myself.

I realized then that we were getting such good traction with the event, slowing it down because I was so overwrought was not a good plan. A better plan would be to enlist others and ask for help.

Eventually, I hired a full-service event team out of Seattle that now does all of our events including our traveling events. That has been a game changer. I still choose all of the speakers, but they handle communication and getting the headshots and bios, along with managing sponsor contracts.

The minutia of the conference is soul crushing for me because I'm a creative person. I love the creative elements. I learned to outsource the things that don't light my fire, so that I can preserve my fire for the things that do matter to me. 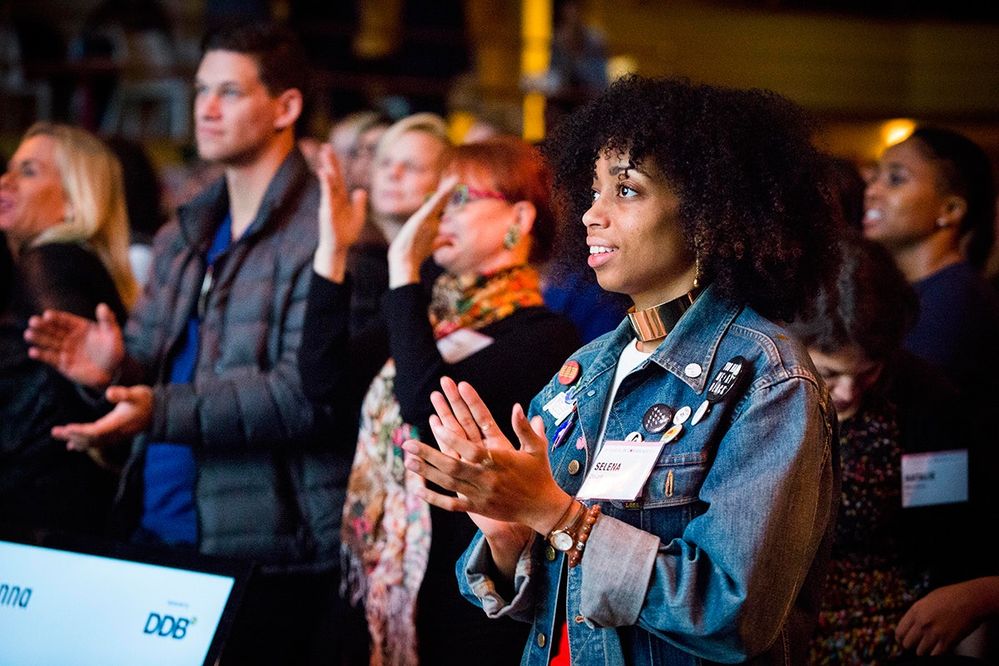 There are times when I am on the road and those days look very, very different from the days when I'm home in Palo Alto. If I'm in Palo Alto, the day usually ends up being a mixture of different things.

I love that I can run my own schedule. Today, for example, I got up and played tennis. I love to play tennis and I love to be outside. If the weather is good, I make time for that. I try to put some movement into every day.

After that, I spend a lot of time on the phone. I often say that I love what I do, but I don't always love the mechanisms I need to use in order to do it. Honestly, I don't really love having an earbud in my ear and talking to big groups of people all day long, but it's a necessary part of my job!

I also have a business partner who comes into the office three days a week. We sit across from each other at this big glass desk and tag team everything that's going on. Sometimes we also go up to San Francisco for meetings, or we travel to other conferences. For example, I was just at the Girlboss Rally in Los Angeles to observe the event and scout new speaking talent. Being on the lookout for interesting ideas or people is one of the best parts of my job.

What do you see as some of the biggest challenges right now for women entrepreneurs and women who are starting their own businesses?

I think it's a great time to be a woman entrepreneur. There is so much you can do on your own. Even something as simple as starting your own website was prohibitively expensive 15 years ago. Now, you can just go to Squarespace and set up a professional looking web presence. In that sense, I think the barrier to entry is quite low.

The hardest thing for women entrepreneurs — that's also hard for women in the workplace in general — is that there is not a lot of support for also raising a family. When you're a female entrepreneur you think, "Oh, I'll have more control over my life if I run my own business." That true, but because it's your own business, you kind of feel like it's never finished.

The toughest part if you have children is managing the balance between working super hard and not feeling like you're dropping the ball at home. I feel lucky that I started my entrepreneurial journey when I was a little bit older, and when my husband and I had the means to hire help with our kids. 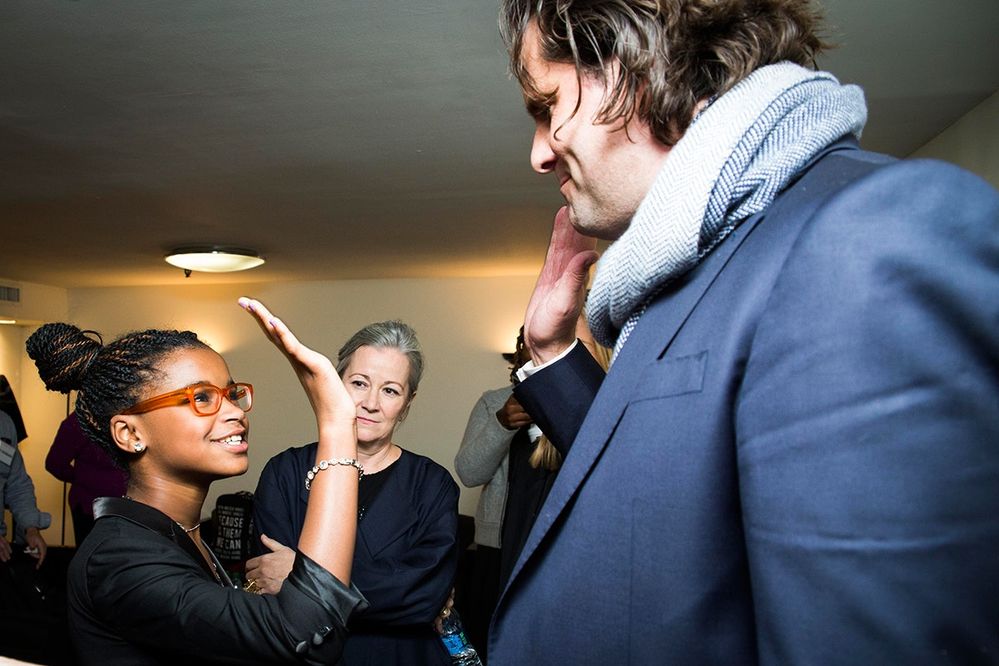 The big goal for our team this year — which it looks like we're going to meet — is launching an agency certification program. We first announced it a little over a year ago, and this is something we've spent a long time researching.

What we're doing is a long game. Diversity in the advertising industry is not going to be an easy fix. I really believe that the next phase is accountability, so we're creating a certification program. This summer, we hope to certify somewhere between two and five ad agencies as "3% Certified." Then, we can point to who has been certified under our program and these will become the metrics that the rest of the industry embraces.

This is a big deal for me, because the conference only touches a thousand people and we work on it all year long. This will allow us to touch tens of thousands of people in a meaningful way.

What would you like to know from the folks here in our community?

I listen to a ton of podcasts and I love to travel and I love to go to other events, but the thing I'm always most interested in is what are the mechanisms that other companies and individuals are using to stay curious about the world.

So, I would love to know: What are you doing to keep yourself inspired, motivated and curious about the world? 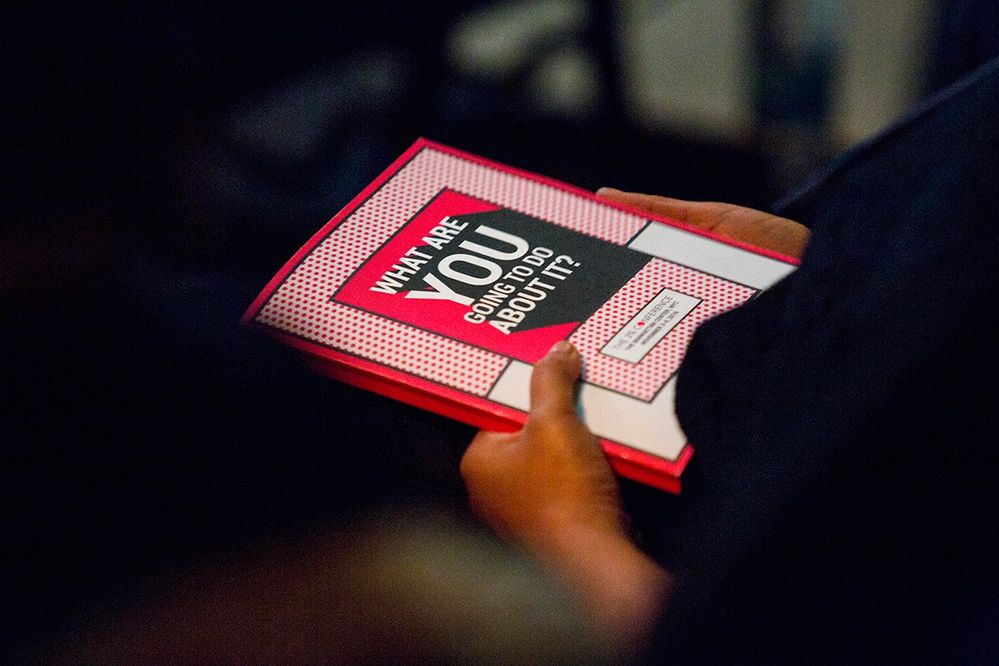 How do you keep yourself inspired and motivated day in and day out as a small business owner? Where do you go to find new inspiration, and how do you stay curious about the world around you?

Share your own tips and insights with us in the comments below. We can't wait to hear your stories! :-)

Reporting in QuickBooks Online Advanced
This is a hosted webinar,you must sign up on the registration siteto attend...
Read more

Successful strategies for moving to QuickBooks Online
This is a hosted webinar,you must sign up on the registration siteto attend...
Read more