Let's get this sorted out, @egresack.

You may encounter this error when creating an invoice. To get this fixed, let's perform some troubleshooting steps.

There are times that the browser stores frequently-accessed data, thus causing websites, like QuickBooks Online (QBO), to act weirdly. Let's try logging in to your QBO account using a private browser.

If this works, it means that you need to clear the browser's cache so the system can start fresh.

If you get the same result while using a private browser, I recommend switching to a different one.

Keep in touch if you need any more assistance with this, or there's something else I can do for you. I've got your back. Have a good day.

We tried the incognito (private browser) suggestion but this did not work.

We had no issues until yesterday and have been invoicing billable charges in the same manner in the past years.  Something caused this to start happening.  We have no changes in the way we are going things.  We have been calling QB support since yesterday but no one is calling us back.  How so we get a "live" support tech on the phone to help correct this issue.  Please advise or provide phone # to QBs live support.  Or contact us @ [REMOVED], ext [REMOVED].

Thanks for following up with us, @egresack.

This is not the impression we wish to leave you with. I'm happy to help you contact our live support team. 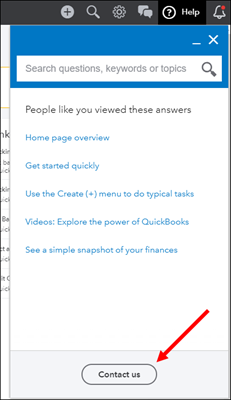 4. Scroll down, then choose the best way to connect with support (Callback, Chat, Etc.). 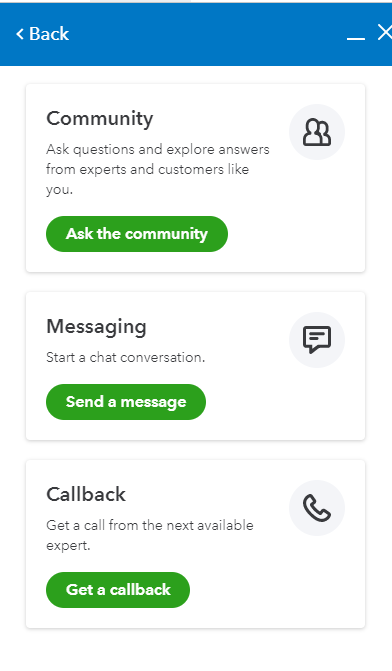 That's all there is to it. Please let me know if you have additional questions or concerns. Feel free to reach out to the Community any time you need a helping hand. Take care!

We did all that you mentioned numerous times.  However we never received a call back, therefore we are leaving our # and would expect a call back asap.[removed]

This is not the impression we want you to experience, @egresack.

I want to ensure your issue gets prioritized and addressed on time. Hence, I'll be providing this resource for the support hours. It contains the time on when the support is available, depending on your type of subscription. Just go to the QuickBooks section of this article for more info: Contact QBO support. We also removed your phone number because Community is a public forum and we need to secure your personal information.

Also, we only have limited staff and reduced our support hours to 6 AM-6 PM PT Monday-Friday due to COVID-19. We will resume normal hours as soon as possible.

In case you need tips and related articles in the future, you can always visit our QuickBooks Community website: QuickBooks Online Self-help.

Stay in touch with us if you have other questions. We're always willing to help. Take care!

I am facing the same issue too. Did this get resolved for you ? Appreciate if you would share the solution.

I can see how important to fix this error message. If you haven't tried performing the troubleshooting steps shared by Mark_R above, we can go through the same steps to better isolate this one. Log in to a private window. It helps the software to function well and load it immediately. Here's how:

If everything works fine, let's go back to your original browser and clear the cache. You can also use other compatible browsers in QBO. If the same thing happens, I would recommend contacting our specialist for further assistance. They can look into your specific account in detail. Here's how to contact them:

Let me know if you have other questions. Take care always.

Same... Is there a solution?

I have followed all the steps listed above.  NOTHING WORKS! NO WORDS TO SAY HOW FRUSTRATIING THIS IS! The Billable Recharged worked until tonight.  Why wont it work now????

FIX YOUR QUICKBOOKS ONLINE SYSTEM!  WE ALL PAY FOR A WORKING SYSTEM!
FIX THE PROBLEM! I CANT GET ANYONE TO CALL ME BACK WHEN I USE THE HELP - CONTACT US.

It isn't the kind of experience that we want you to have, DGrace99.

At this time, I recommend reaching out to our Phone Support team. We have agents that have extra tools that can do a screen-share with you and verify the issue.

Feel free to get back to this thread if there's anything that I can help. Keep safe!

This is happening to us as well - can't invoice anyone right now. Anyone figure out what was wrong and how to fix?

Let's perform some basic troubleshooting steps to check if it's a browser-related issue, ol4. The stored cache can affect the performance of QuickBooks Online. I suggest following the steps provided by my colleague, @SarahannC, to complete the process.

However, if the issue persists, I recommend contacting our QuickBooks Support Team. One of our representatives can securely check your account and further investigate the root cause of this.

You can get our phone support to call you back via our Contact Us feature. I'll guide you how.

To ensure that you'll be assisted on time, please check out our support hours.

Additionally, I've included an article about how to receive invoice payments in QuickBooks Online. This helps you categorize the customers' payments to ensure accurate data: Record Invoice Payments.

Keep us updated if you have other questions or concerns. We are determined to ensure your success with QuickBooks.

This error message is the same as the one on this thread: "all reimburse chg CCBT sequences need to be mapped,2 for reimburse ch...".

In any event, this is what I did to fix it. First, it was unrelated to cache ... I get that cache can be an issue - I'm a full stack developer of 25 years. I used an entirely different browser that had never been to the site to confirm this. Even in that browser, the issue was still present.

Here are the steps I performed to fix this:

1) I created a new invoice and did not include any of the billable expenses and was able to save it with just labor associated. I did this to confirm that I could still generate & save invoices on this project and that the issue was truly related to an expense and not something else.

2) I went to the original expense entry that had the billable expenses I was trying to include in the invoice, I moved all the line item'd expenses to an internal project that we occasionally earmark stuff into. It's been around for awhile so I felt like this project was stable an unaffected by any wonky stuff that could have occurred in the past week or so.

3) I saved the expense entry with these updates, then I returned to the invoice I had just created to ensure that those line item'd expenses were no longer available to attach to the invoice as I had moved them away from that project. I figured this would confirm that the expense entries were definitely re- foreign key'd ( if ya'll use SQL instead of NoSQL - I don't know ) to the older project I moved them to. They were no longer available, so that worked.

6) I added them and hoped this time it would saved without any issue and it did, so everything is working now.

All the best. I hope this may assist anyone else who runs into this issue and finds this thread.

I found a fix that worked for me. I posted to this board, but it's not showing up yet. It was pretty straight forward but a little annoying. If it does show up in a few, I'll try reposted the fix.

Thank you for sharing your insights, @ol4.

I did some research and found out that there's an ongoing product investigation (INV-51508) about the error when adding billable expenses to invoices.

For now, we're unable to provide you an estimated turnaround time when the investigation will be closed. Rest assured that our product engineers are working on fixing this.

I suggest reaching out to our support team. This way, we can add you to the list of affected users and get notification emails as soon as the issue is resolved.

I've also added this article that can guide you in personalizing your sales forms in QuickBooks Online: Email and customize sales form.

I'll be on the lookout until this gets resolved. Please let me know if you have additional questions. I'm always here to help.

Community Chatter: What do you splurge on when you get the chance?
I was talking with some friends the other day about what we had been splurg...
Read more