Is this issue fixed? Has deleting "Entitlement File" worked for anyone?

Thanks for joining this thread, arun1103.

I appreciate the additional information you've provided. With that being said, I'd suggest contacting our Customer Care Support team to assist you with the error prompting on your end. They can get this fixed right away. Here's how: 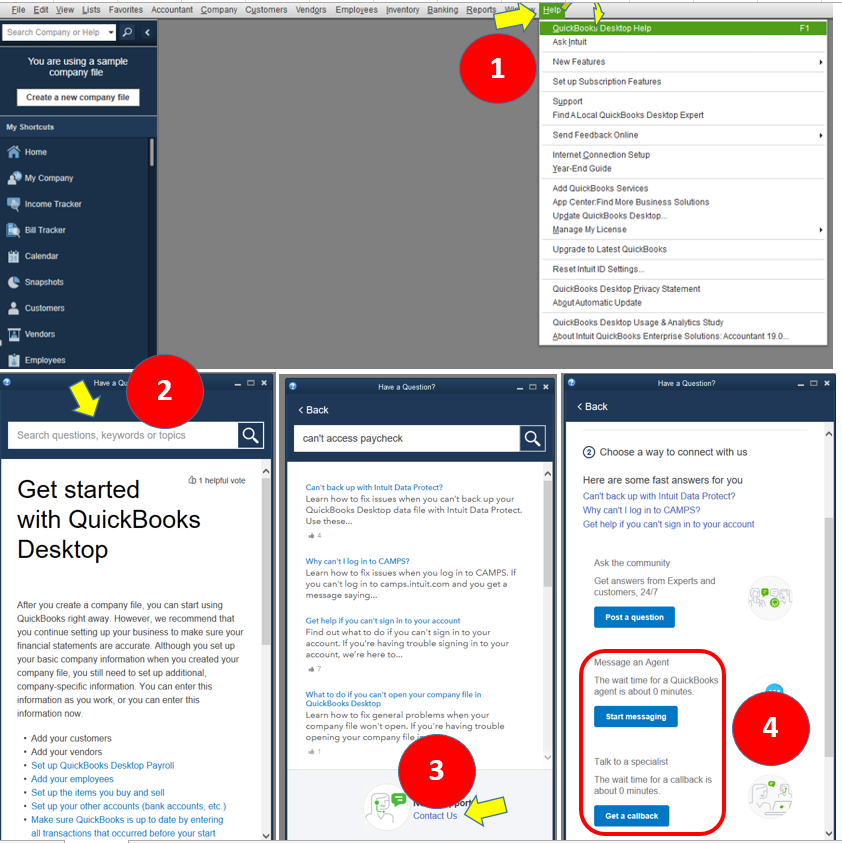 If you have any other QuickBooks concerns, please post them here and we're here to help.

Don't waste your time contacting support. I spent 2 hours and they had no information.

Same issue here with our Fishbowl server.  Anyone make any progress with this?

Has anyone figured this out?  This issue has been killing us for at least a year.

You'll want to run the Fishbowl integration again, make sure to follow these requirements before doing so:

If the same error persists, I recommend reaching out to Fishbowl support directly. They'll be able to help you resolve the error.

I'll be around if you have other questions.

Oh I have.  I have to go through this process every week or two.  I've been working with Fishbowl support on this for over a year.  It always boils down to Quickbooks throwing the error mentioned in the first post in this thread.

Anyone make any progress with this?  We went as far as to build a fresh server, do a clean install of Fishbowl, and Quickbooks.  And the issue persists.  Seems to be happening to many people.

I appreciate you for taking the time to reach us back, nags.

Thanks for letting us know the steps you've taken beforehand. I am determined to help you find a solution for this issue between QuickBooks and Fishbowl integration . In order to move forward, I recommend reaching out to our QuickBooks Care Support. They have the tools to conduct a thorough investigation for a complete resolution.

Please take note our operating hours for chat support depends on the version of QuickBooks that you're using. Please see this article for more details: Support hours and types.

Keep me posted for additional questions or other concerns. I'd be more than happy to help. Wishing you the best of luck.

I have just also received a message ‘ desktop has reached the expiration date and will no longer open company files”.

I have followed the suggested process and deleted the program data file, re-entered my details, and again received the same message, based on my existing authorization code which the system defaults to.

I had planned this weekend to update my accounts and had been working to that end until late last night. Thus it is extremely inconvenient to without any notice be locked out of my files.

I upgraded to QuickBooks 2021, because I received a received an email offering me 2021 as part of the support package. There was no suggestion that this was for a limited period. No weekend support is available.

I respectfully suggest that it is unethical to summarily terminate access to accounts with no notice, and amounts to misuse of market share, and is thus in effect anti-trust behaviour.

Further I note there is no support at weekends for QuickBooks users in the United Kingdom. So I am unable to ring anybody to find out why my access to my data records has been blocked. Unlike QuickBooks I’m sure that many of their clients are obliged to work weekends, for a host of reasons.

For the record I would note I was also forced to upgrade from QuickBooks desktop 2018, because they summarily and unilaterally removed the capacity to import bank data. It was not made clear at the point of purchase that part of the programme would be disabled. Surely none continuance of support is not the same as deliberate and proactive disablement of the programme to force users to migrate.

The same thing also happened with an earlier version of QuickBooks, where I found myself in a position where I was forced to migrate, and had little choice.

I have been a loyal user of QuickBooks since it started. I would suggest that the company is starting to abuse its market position through what is arguably contractually illegal behaviour, and thus is putting itself at risk of anti-trust proceedings.

I do not know whether lockout from my account is due to access having run out or a technical problem I am unable to fix because I have no access to support.

However, such behaviour is described as above surely will long-term force customers to look at other accounting alternatives. I have for the first time spent an hour on the web looking for alternatives to QuickBooks.

I further note that other customers are making similar observations that QuickBooks is no longer meeting their needs, for a variety of reasons including failure to meet its arguable obligations to behave in fair and ethical ways.

I know this has been a tough and trying time for you to contact our support team and I'm here to ensure that I'll be able to address your concern, RAB5.

Due to COVID-19, we have limited staffing and have reduced our support hours from 6 AM - 6 PM PT Monday - Friday. You can contact them on weekdays to make sure you'll be able to talk to one of our representatives. We will resume normal hours as soon as possible.

On the other hand, the message that you received about the expiration date means that your QuickBooks Desktop version has already been discontinued. To keep your account working, upgrading it is the only solution so you'll be able to access QuickBooks. And it's a good thing that you're done with the upgrade. However, it seems that you're still experiencing issues in accessing your company file. You can verify if your current system supports the latest version of QuickBooks.

You might also want to check out this article that provides FAQs about service discontinuation: QuickBooks Desktop Service Discontinuation Policy And Upgrade Information.

For your additional reference, you can check out these help articles if you have any questions related to QuickBooks.

Fill me in if you need further assistance. I'll always be around to help you, you can reply or comment below.

Thank you for responding.

Quickbooks appears summarily without notice of any sort to have terminated access to my data by denying my ability to use the program, and further at the weekend, when there is no support available.

They have clearly given no consideration to the potential downstream financial and or regulatory consequences of such action on customers. Is such inconsiderate action a signpost the company do not care about the realities of their customers lives, but only their bottom line?

When such disregard for the lives of customers is in the context of a product or service that is 'essential', we are surely in the world of 'anti trust' considerations… and with filing dates, rental quarterly obligations, essentially of accounts to survival of businesses, etc., I suggest capacity to access ones own accounting data is a basic right, and withholding of that data access summarily, by denying access to basic functionality, thus data owned by the customer, amounts to abuse of market position.

Absent change maybe it is time for the regulatory authorities to step in to guarantee customers a right of long term access to their own accounting own data, even if further functionality is denied, subject to a requirement for reasonable notice.

Many thanks for responding. I appreciate the problem is not of your making, but please can you can forward this to those that do make such decisions . . .

Thank you for responding.

Quickbooks appear without notice to have terminated my capacity to utilize the program including to view the data I own at the weekend when there is no support available.

Does this inconsiderate behavior signpost the company they really do not care about the realities of their customers lives, on they the bottom line?

Surely when companies behave in this way in respect of a product or service that is essential, in that summary unilateral termination without notice of service can have financial and regulatory downstream consequences on customers, we are in the world of 'anti trust' considerations… and with filing dates, rental quarterly obligations, regulatory filing obligations etc., I suggest capacity to access ones own accounting data is a basic right, and withholding of that data access summarily or at all amounts to abuse of market position.

Hence my comment above, that Quickbooks had disabled a key function of the core program, abiliyt to upload QBO files = and not as claimed an add-on program which allowed bank connection (which had connected to the bank but never managed to download any data, not least because the bank only provided PDFs - it never ever worked despite marketing claims! :(