A full-service moving company, Marathon Moving Company Inc. is accustomed to residential and commercial moving in-state, out-of-state, and across the country. In addition to that, they have a full range of products for packing and moving, and they provide labor for people who need to load or unload their vehicles. In other words, Marathon Moving Company handles anything that has to do with relocation. And as their name suggests, they pride themselves on efficiency.
Owner Neal Leeper says the moving company started based on the same kind of customer service they’d mastered as a property management company, and they’ve since grown from just one moving truck to four, and they now employ 20 people. For a relatively small company, Marathon Moving has a lot happening at any given time. 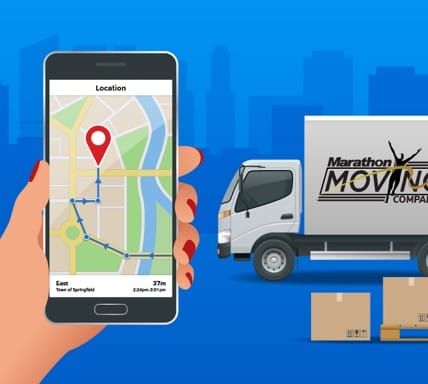 “We have moves scheduled basically all day, every day, all over the place,” said Leeper in an interview with QuickBooks Time. “Our typical day-to-day would be if the guys are leaving from here, they arrive in the morning, get the trucks ready, do whatever they need to do, go out, and then, at some point, work their way back to the office.”
Leeper explained that since employees are always on the move, it became increasingly important for them to keep track of who was working and where they were located, which is why QuickBooks Time for time tracking with GPS capabilities and QuickBooks Payroll made so much sense for their business.

75 percent savings and an extra $100 with QuickBooks Time

Time tracking and payroll that’s moving on up

The next thing Marathon Moving needed to improve was a better system for keeping track of hourly employees. Just a few weeks after rolling out their new payroll process, the Marathon Moving team was introduced to QuickBooks Time. Now that their employees are using the mobile time tracking app, they can use clock-in and clock-out notifications to make timesheets even more precise.
Leeper said the transition was a good move, as the problems with the original payroll solution cost more money — not to mention headaches — than the company could afford. “It was so bad,” he commented. “We would overpay by thousands each week or underpay by thousands each week.” As you can imagine, for a small business like Leeper’s, this kind of hit can create big problems.
A recent survey by QuickBooks Payroll found 1 in 4 employees has received a paycheck with errors. It also discovered that 1 in 6 employees would even leave their job if they received a single inaccurate paycheck. And since people who work for smaller companies value job satisfaction, it’s vital that businesses like Marathon Moving get payroll right the first time.

“Realistically, between QuickBooks Time and QuickBooks Payroll, I am probably saving 50% on my costs, not to mention probably 30 hours a month in headaches.”

“These guys are used to getting paid every week, since there is no flow in this business,” Leeper said. “It’s pretty much cash-in-cash-out, so if you have a lack of funds coming in, some credit card processing [delays], or whatever the case may be, and they are off by $3,000 … I mean, that is a significant problem.”
He went on to say that since his workers are accustomed to getting a steady check, if checks were ever wrong, Leeper would have to deal with the problem as soon as possible, issuing new payments and cutting checks manually. “It was literally turning into an absolute nightmare every week,” he said.
The right time tracking and payroll solutions are incredibly important for both the employers and employees. Being a timely and reliable paymaster is a reputation every business wants to be known for. This then helps them to attract and retain the best talent. With QuickBooks Time, you can achieve both.