Managing workers in the field can be a lot like listening to a film through a walkie-talkie. From a distance, you hear fragments of the plot, and you have a vague idea of who’s doing what. But you can only rely on your instincts to determine when the credits will roll. And it’s especially easy to let everyday administrative tasks take a back-row seat to the action that’s unfolding on the job site.

Berger Steel, a steel subcontracting company with roughly 70 employees on payroll, understands what it’s like managing a remote workforce from afar. One of their biggest challenges? Collecting accurate timesheets from their employees at the end of each week. Already QuickBooks Desktop-enabled, QuickBooks Time was a simple solution for Berger Steel’s time tracking and attendance woes.

We recently caught up with David Back, Berger Steel’s safety director, to find out how operations have improved since his team started integrating QuickBooks Desktop with QuickBooks Time for time tracking.
But first, what was life at Berger Steel like, pre-automation?
Before implementing QuickBooks Time, David knew the company needed a better system for collecting employee hours correctly and efficiently, especially for workers on the go. David says Berger Steel employees are paid well, but incorrect timesheets could add up, amounting to a significant expense for the company.
At the time, employees were turning in paper time cards that were often messy, incorrect, or incomplete. The problem was especially painful for office manager Mellisa who had to translate the piles of time cards into the computer by hand to run payroll. To combat this issue, Berger Steel rolled out QuickBooks Time to their 20 employees in the field.

How Berger Steel flipped the script

This seemingly small change began paying for itself on day one, with real-time access to field employees’ time cards and more accurate records for time spent on each project.
Before QuickBooks Time, Mellisa said she would round employee hours to make things simple. Now she leaves time cards from QuickBooks Time exactly as they’re entered on the app, and when she syncs the hours with QuickBooks Desktop, she doesn’t have to round up or down to streamline the process.

“I don’t round anything anymore, so it’s literally precise to the dollar,” she said.

Speaking of precision, instead of having to rely on their busy employees to remember to fill out time cards at the end of each week (leaving ample room for errors), admins can now simply have their employees clock in and out using the QuickBooks Time Clock Kiosk on a tablet at each job site. And hours worked are immediately added to QuickBooks. This feature alone has saved them money from the get-go.

In addition, knowing who’s working has also helped Berger Steel ensure their employees don’t dip into expensive overtime.
For Mellisa, QuickBooks Time has meant trading thousands of stored paper time cards kept in boxes in the office for quick, simple snapshots of employee time on any device. “I like that it is a one-stop shop. … I can pull up or generate a report and look at everybody across the board, versus flipping through manual time cards,” she said.
In the end, thanks to the quick success of their new time tracking system, Berger Steel decided to roll the software out to the whole team. “At that point,” said David, “there was no reason to have time cards for the guys in the shop anymore, so it was just a natural transition to roll it out to everyone and get everybody on the same process with very minimal capital equipment.”
They also decided to invest in several tablets, so QuickBooks Time clocks would be accessible in the shops where workers punch in and out.

1. A better view of who’s working
Before switching to QuickBooks Time, Berger Steel hadn’t nailed down attendance, and Mellisa struggled with their very outdated system. “I was literally having the shop foreman come in just to tell me who was in and out each day, who was late, who was missing, or who didn’t call in,” she said.
Now, she logs into QuickBooks Time first thing in the morning, and she can easily see who is working — and on what. “That’s one tool we really like, too, because you can see who is working out in the field,” said Mellisa, explaining that previously she’d have to field phone calls from people who forgot to call in with the attendance list. “They could say they’re there, and I would never know the difference,” she said. “I just plug right in [to QuickBooks Time] and, boom, I see exactly who is doing what.” 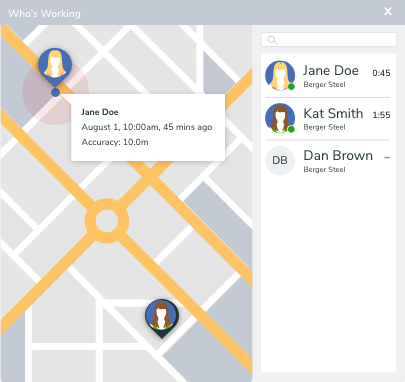 It’s not uncommon to have employees who need to call in sick or who show up late, but without a more sophisticated system, employers can’t see the whole picture until later in the day or even the next day. With QuickBooks Time, they have immediate information, so they know where they are short-handed, making it easier to coordinate their teams and get jobs done on time.
“It just gives us the allocation of resources for labor and a better handle, especially out in the field,” said David. “That was an unexpected, major bonus as we rolled QuickBooks Time out in the first month to our 20 guys out in the field before we rolled it out anywhere else.”
2. Time clocks promote accountability on the job site 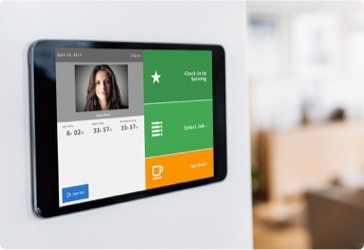 While some foremen use the mobile app, Berger Steel uses the QuickBooks Time Clock Kiosk on tablets for clocking in and out. Each foreman has a tablet with the time clock installed, and employees clock in and out at one on-site location for better accountability.
According to David, before QuickBooks Time, employees could easily modify each other’s time cards, but now time cards are secured, thanks to photo capture and facial recognition functionality enabled on each time clock kiosk. Employees are also more accountable for their standard 30-minute lunch breaks with the new system.
3. More accurate labor costing
Although Berger Steel doesn’t bill clients for time (they bid a fixed price for a construction job), QuickBooks Time gives the company a better understanding of how much time has been spent on each job. “Now there is no question in regards to their time. It’s accurate,” said Mellisa
Mellisa said Berger Steel’s employees appreciate the transparency of being able to see their hours worked alongside their paychecks. In the past, employees would only see the paid total on their paycheck. But now, Mellisa prints out the payroll reports from QuickBooks Time and pairs them with the employee’s pay stub so they can see all of their time — and know they’re getting paid for exactly the hours they worked.

David said QuickBooks Time has surprised the Berger Steel team with the ways it informs other aspects of the business, including the real-time insight it provides. And when paired with the GPS in their trucks, the company also gets a clear story of who is where when they’re on the clock.
What started as an option for eliminating manual time cards has become a full-service technology solution.
“It’s definitely exceeding our expectations,” said David. And Mellisa agrees, “It’s done a lot more than what we even expected it to do for us.”
If you want a front-row seat to your company’s success, regardless of where you’re working, QuickBooks Time is here to help. Ask us how QuickBooks Time can help you manage your team’s time and save hundreds on payroll.
Got field employees? Simplify coordination with GPS time tracking.
Try QuickBooks Time free!