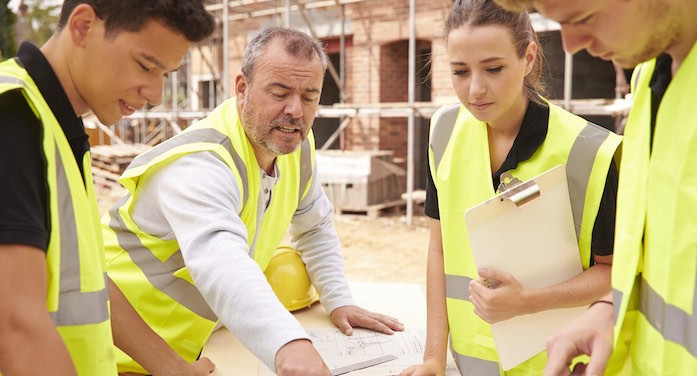 The construction industry has not recovered from the 2008 recession, where more than 1.5 million residential construction workers were laid off. Many of them never came back, yet in the U.S., houses are now being built at a rate of 1.2 million a month, more than double the rate in 2009. There’s an obvious dilemma in construction right now––there are more jobs than there are workers.

One solution construction companies have used to attract and retain workers is increased salaries and wages. The New York Times reported in April that this trend is evident throughout the entire spectrum of skills and occupations in the industry, from supervisors and high-skilled workers to the lowest-earning, non-skilled workers.

But the current projected rate of construction growth––by some estimates a 4.9% Compound Annual Growth Rate (CAGR) by 2023––just doesn’t match up with the labor shortage impacted by an aging workforce and a younger workforce that doesn’t see much appeal in the trade.

All these factors make it imperative that companies come up with other benefits and incentives to fill future positions. While construction projects show no sign of slowing down, vacancies created by retiring workers aren’t being filled fast enough. To sustain continued growth in the industry, appealing to younger workers is absolutely essential.

Ensure your workers’ health and safety

There’s no arguing that construction can be a hazardous field, but the statistics on health benefits for workers don’t reflect this fact.

When career website Zippia analyzed information from the Bureau of Labor Statistics (BLS), it found that 11 out of the 20 occupations least likely to have employer-sponsored health insurance were in construction. For instance, more than half of all roofers are uninsured, as well as nearly half of all drywall installers, plasterers and stucco masons.

Some of these workers were covered by workers’ compensation for injuries on the job, and others were classified as independent contractors and thus not entitled to health insurance. Yet in a separate study by the Workers Defense Project, only 5% of those surveyed said that workers’ comp would cover their costs.

Although this study focused only on southern states, here are a couple more enlightening statistics that employers can address to get more potential workers interested:

When workers are spending 40 hours or more a week in all kinds of weather conditions, operating dangerous equipment in a hazardous environment, ensuring they are supported by health benefits can go a long way to make the job worthwhile.

At the very least, construction companies can take measures to make regular breaks a part of the culture, as well as paid vacations, sick leave, and personal days. Providing basics like drinking water on-site and reimbursing team members with gas when they have to drive long distances to job sites should be a given as well.

Not only will these changes make the environment more stable and safe, but it will also ease financial concerns for workers worried about potential injuries on the job, which can be a dealbreaker that makes them look to other industries for employment.

If there ever was a time when all people looked for in a construction job was a paycheck, those days are now long gone. As baby boomers start to retire and millennials begin to make up the majority of the workforce, new patterns have emerged that can make a huge difference for employers.

When compared to baby boomers, millennials tend to care much more about mentorship. In a study by the consulting firm Atenga Inc. and documentary filmmaker Josh Tickell comparing the two generations, millennials were more likely to:

While 67% of baby boomers said they cared about making more money than about doing good, millennials ranked the two values equally, meaning they were more likely to stay at a workplace that felt meaningful.

Providing a mentorship program has immediate benefits not just for millennial workers eager to find meaning and improve their skills, but also for construction companies that are desperately seeking to replace retiring workers with younger ones who don’t always have the skills or experience of their older counterparts.

Moreover, there are benefits to being a mentor as well. A study published in the Journal of Vocational Behavior noted that those who serve as mentors are more likely to:

Launching a mentorship program can have lasting benefits for all parties, from older and younger workers to the company itself.

As construction companies need to replace retiring workers with those eager to learn and pick up the know-how for future career advancement, partnering workers in a mentor-mentee relationship can not only transfer skills but also provide workers with a sense of purpose that leads to better job performance.

Compared to traditional internships or apprenticeships, which tend to be more standardized and focused on giving credentials or certifications, mentorship programs challenge both managers and trainees through one-on-one interactions that can last well after the program is over.

You can set up your own mentorship program in-house or through organizations like the Construction Management Association of America (CMAA), which provides a Mentor Registry as well as resources for construction managers who want to become registered mentors.

To attract younger workers to your program, partner up with local schools so students can participate and get hands-on experience working in construction. By receiving more one-on-one guidance, they’ll get a much better understanding of the work and their future prospects.

Encourage mentors to stay in touch with them afterward and help them through the application process if they decide they want to continue working. You can also offer your mentorship programs during the summer when students are actively seeking work.

The construction industry is notorious for being slow to implement technology, falling behind other sectors like banking and telecommunications. In a report by consulting firm KPMG, two-thirds of construction executives don’t use advanced data analytics, while less than 20% said they would reconsider their business model to adopt new technology.

When executive coaching company Vistage surveyed construction CEOs, the results were similar. Only 10% said they felt the need for new technology, and almost half responded that innovations like AI and connected devices won’t have an immediate impact on their businesses.

The problem with a tech-averse approach is obvious when it comes to recruiting younger, forward-thinking workers to the industry. According to a national poll of young adults between 18-25, only 3% of them were interested in entering the construction trade despite the fact that there’s plenty of work and often good pay.

To combat this, construction companies like Crane Industry Services and Eutaw Construction are using simulators (which can be used with virtual reality goggles) that let young students experience what it’s like to operate machinery at a construction site. By turning the job into an immersive game through technology, they make the construction field more appealing and familiar, as opposed to something that’s outdated and unapproachable.

For millennials who are showing less and less interest in blue-collar jobs, tech training and career development in construction can be a key selling point. Reframing construction as a field that’s at the forefront of some of the latest technology is necessary to revitalize the industry and attract young workers.

So whether it’s pushing for a tech-fluent application process, embracing new technology and methods in everyday operations, or creating a program to train workers for high-tech skills, focusing on the technological aspect of the job can be a draw for workers that want to know that a career in construction is the best thing for their future.

Build your business with an industry-specific software solution to manage your finances and connect with workers on the field. It can be the first step in transforming your company to an attractive workplace in the construction industry.

The key to filling open positions

If you’re already benchmarking your wages and offering competitive salaries but still struggling to find younger workers, thinking about worker benefits will be the key to filling open positions. While the importance of the paycheck is clearly paramount, it’s ultimately the company culture and benefits that make all the difference in creating an appealing workplace.

This article currently has 5 ratings with an average of 2.0 stars