Made in California: How One Entrepreneur Launched an Outdoor Apparel Brand from Scratch 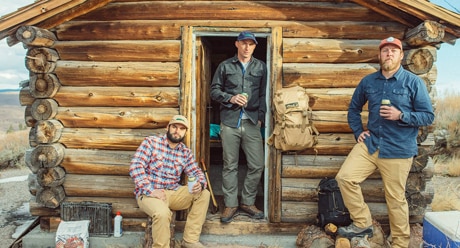 2013 was the year everything changed for Tony Vontz. First, he got married. A month later, he created a pop-up store outside of his apartment in San Francisco with a batch of shirt jackets—a light, fleece shirt—and sold them to 30 complete strangers.

Launching his own brand came organically to Tony as a result of seeing what he could do to run a modern, data-driven apparel brand while working for a clothing company that was still running things on an outdated model. He started making samples on the side out of a fabric he liked, learning the ins and outs of local manufacturing.

“What started as a hobby turned into a viable business.”

“I got a crash course in figuring out how all the stuff works and gets put together. I sampled, sampled, sampled. What started as a hobby turned into a viable business,” says Tony.

Every product sold by Edgevale is made in the Bay Area or Los Angeles. This presented a huge logistical challenge he hadn’t foreseen from his experience working for performance sports brands that outsource their operations overseas.

Coordinating with five to 15 different entities at a time proved to be a huge timesuck. “We’re bringing together all the various pieces of the supply chain a la carte so to speak, whereas if you were to go to China, Pakistan, Vietnam India, you’re getting a combination plate,” he explains. “Obviously in a perfect world, you’d be focusing on retargeting, Facebook ads, all that. But your time’s being sucked up driving to this guy to deliver to that guy to go to the zipper person to the button person to the marker maker.”

So why do it this way?

For one thing, it stays true to the brand’s local origin story. But there’s another reward that’s priceless. “If what you love is bringing something 3D to life, this is the kind of business where you get that fulfillment everyday,” he explains. Being close to the production facilities means there’s more room for flexibility, with a faster turnaround time for a sample to make its way to Tony’s doorstep.

“It almost makes you forget all the pain and suffering it took to get there. That’s what we do it for. We love to make stuff.”

“When we get samples or production runs and it comes from a sketch or an idea into an actual thing that somebody’s cut and sewn, that’s the coolest and best part of the job. It almost makes you forget all the pain and suffering it took to get there. That’s what we do it for. We love to make stuff.”

When he first started making samples, Tony burned through a lot of personal cash. Since he had no cash flow in that first year, it meant he was operating out of his credit card and savings to fund an expensive operation. In other words, he was totally resource-strapped.

That led to more creative ideas on how to generate some cash flow.

“A lot of people who come out of the gate with a ton of money spend lots of money in ways they didn’t really need to. For us, the need for cash flow forces us to be creative so we’re generating it all the time,” he explains. “We’re like the restaurant that has to use every part of the chicken.”

This is part of the reason why Edgevale has never gone to a big discounter where you can lose money. Tony didn’t want to give away a bunch of equity; instead, he thought about how to get money upfront through the website and incorporated pre-orders, adding 10-15% more stock on top of the orders. This helped him to improve the cash flow and allowed for more accurate projections, up to a year in advance of Christmas sales.

When they received a huge mistaken order from the factory, it gave them another chance to get creative. Rather than sitting on the inventory, Tony decided to do a flash online warehouse sale. “We get creative with all sorts of interesting ways to move product all the time, so that there’s nothing ever in the proverbial refrigerator,” he says.

Even though Tony started out with a desire for a data-driven approach, there was no previous data for him to rely on right out of the gate. “You have no historical data to go off of for what you’re selling, what colors work, whether you’ll be needing lots of XXL, S, 28s or 30s,” he says. “The biggest challenge is you don’t know what you have until you start making mistakes.”

As a result, Edgevale sold everything in its experimental stage in that first year. Today, the brand is a lot clearer about what it stands for, and what its core styles are.

“We want to be the pizza place that sells the three best pizzas in the world. Three flavors, the best, and get as many people eating those pizzas as possible,” he explains. “These days, consumers curate. They take the best from every brand and fill up their closets that way. So we double down on our best styles.”

The same goes with branding. Rather than trying to appeal to everyone, Edgevale is very upfront about its offerings; yet, it leaves enough room for people to project onto the brand. The trick is to be true to what you stand for, without forcing an idea down customers’ throats.

“These days, consumers curate. They take the best from every brand and fill up their closets that way. So we double down on our best styles.”

“If it resonates with me and I wouldn’t be embarrassed to show it to my best friend, then it’s right,” says Tony. “It means you’re not trying to hop on whatever the trend of the day is or moving with the breeze. Our branding is classic, it’s unique to us, and definitely speaks to our California roots.”

This is also why Edgevale has a more selective approach when it comes to retail. Initially, the clothing brand was in 20 spaces, but Tony has taken them out of all but one. Although the changes in consumer shopping behavior accounts for part of the decision, branding takes up a bigger chunk of the pie.

“It has to make sense as a marketing play, more than a revenue generator. If we can get in a really cool store where we can do collaboration, then it makes sense. Trying to open 200 doors is well within our grasp, but will it mean we’ll be making money? I don’t think so.”

So what is that one store that makes the cut? Not surprisingly, it’s a local store in Mill Valley, called Proof Lab.

“They have a really innovative approach to retail. It almost feels like a community center more than a store. And if there were Proof Labs all over the country we’d be in them, but there’s only one that I know of,” says Tony.

This year, Edgevale continues to be clear about their mission, which is to become a leader in outdoor pants. “I know it seems like a weird thing to say,” explains Tony, “but I think that’s a market we can really be a player in, and we can continue to manufacture stuff in the U.S. in that scale.”

With a new designer onboard, and plans to tweak the website and logo, Tony wants to continue with direct online sales and creative approaches that will appeal to a younger generation of shoppers that are careful to select only the best from a brand.

“Q1 for retail has been absolute bloodbath, so there’s just a lot of changes going on,” he says. But rather than being alarmed, Tony sees this as an opportunity for Edgevale. “Younger people are totally fine buying stuff online. We’re at a cool inflection point.”