Smooth Sailing: How a Ship Surveyor Successfully Navigated the World of Entrepreneurship 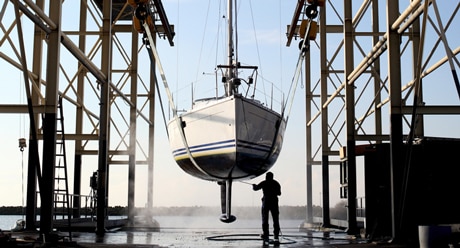 Living in a tropical paradise and having a job that requires hopping on and off gorgeous yachts sounds like a dream job for most of us, but it‘s real life for Saagar Kadiyala.

In his mid-thirties with an easygoing demeanor and a ready smile, Saagar Kadiyala makes his living as a ship surveyor. He used to work for the Cayman Islands Shipping Registry but last year he made the decision to take his dream job to a new location and begin working for himself instead.

We connected with Kadiyala, who now lives in Florida, to get his take on the unique learning curve of small business ownership experienced by so many new entrepreneurs. Over the next hour, we discussed the good, the bad, and the sometimes bewildering aspects of working for yourself.

First, Kadiyala helps us understand exactly what his job entails. “I’m a ship surveyor, but I focus on regulatory work,” he explains. “Every ship that travels internationally has a flag on the back, and on the back of the boat, it’ll say the name and then the port of registry. So whenever a ship is registered in the country, people like me need to go out and survey it to make sure that they’re complying with international codes and conventions and they’re up to date with regulatory compliance.”

Kadiyala estimates that he spends two to four days a week surveying and the rest of his time in the office getting caught up on emails and paperwork, making for a nice balance of site work and admin duties.

It’s common for entrepreneurs to experience a rough first year, juggling startup loans, ironing out cash flow problems, and adjusting from being an employee to being self-employed, but Kadiyala’s adjustment into the world of small-business was smooth sailing from the start.

“I had a new subcontractor agreement in hand as I was signing my resignation.” he says, “There was a lot of support from my former employer and there was very little uncertainty which I was really grateful for.”

Even his day-to-day life didn’t change much—while employed as a surveyor, Kadiyala worked independently much of the time, often traveling and working off site rather in an office environment. So, rather than being a shock to the system, he’s adapted to his new work environment and is thoroughly enjoying the unique benefits of being your own boss.

“This really seems to be suiting me, the working remotely thing,” he laughs, “I like working really hard at something for an hour and then wandering around the house, fixing something, running an errand and then coming back to it. I find it really easy, switching on and off like that. I really like it.”

For some reason, bureaucratic processes are never quite as easy as they seem. Kadiyala’s experience was no exception.

His business is set up as an S-Corp and when we asked the process to do so he begins to reply, “That was actually fairly easy…” and then immediately catches himself. “No! I tell a lie. That was a huge pain.”

He explains that while preparing for the transition to self-employment he registered his company name but, oddly, never heard anything back. Assuming there had been a hiccup, he followed up with the paperwork only to be told that there was no evidence his company had been formed. Then upon actually moving to Florida, Kadiyala went once again to register his company name and was told that it was already taken—by him. But by this point the filing deadline had passed, and Kadiyala was given the choice to pay a $600 late fee or dissolve the company and re-form it.

Navigating government red tape can be incredibly frustrating but Kadiyala took it in stride and has now moved on to focus on a second, and more unique, challenge.

“The real struggle I’m facing right now is since I moved to the US I don’t have much credit history,” he explains. “I’ve got a company [bank] account but because of my limited credit history I don’t qualify for a company credit card because I’ve only been in the US so long.”

This means that Kadiyala is stuck putting many business expenses on his personal credit card. He still gets reimbursed by his clients, but it puts him in the odd position of mixing personal and business accounts in his QuickBook entries, something he’s now trying to sort out with his accountant.

While discussing his adjustment to the accounting world, we discover an amusing quirk of Kadiyala’s business.

He continues, “I wish I would have been really concrete in talking to my tax preparer. I don’t have an issue with bookkeeping—I know how to get it all in there, QuickBooks makes that really easy—but how to categorize it so that someone else can use it and then setting up a plan to go (especially for S corps) from Day 1 to the day you have regular payroll…” Kadiyala starts laughing. “The business has no cash flow problems but I have cash flow problems!”

The issue is that although there’s money in the company, Kadiyala has to come up with smart (and legal) ways to get it into his personal account, a problem you just don’t have when working for someone else and collecting a paycheck every two weeks.

Despite the upside down nature of this problem, Kadiyala retains his trademark sense of humor. “I have the luxury of having my wife’s income to depend on as well, but without that—it’s embarrassing to say out loud—I have a successful company but I have no money!”

Regardless of some choppy waters here and there, Saagar Kadiyala’s first foray into entrepreneurship has been an undeniable success. He’s managed to take a job he loves and create a career he has complete control over—and do it in the fresh air and balmy climate of sunny Florida, no less. Well done.

This article currently has 5 ratings with an average of 1.8 stars