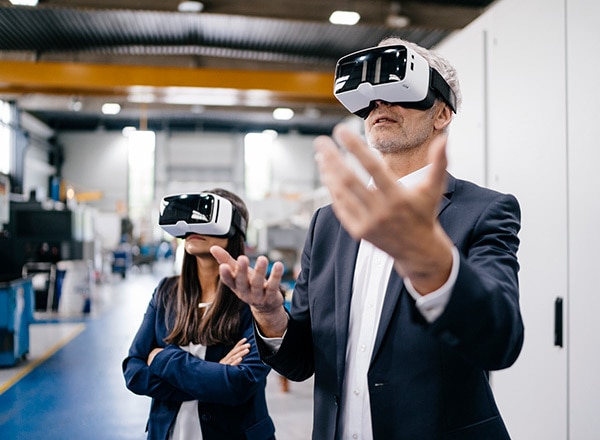 How AR and VR are changing the game for manufacturers

The 90s gave us a clunky vision of virtual reality, with large, head-mounted displays mostly intended for gaming or entertainment. Whether you saw headsets at an arcade or devices like Nintendo’s Virtual Boys stocking the shelves at the stores, it skewed our view of the technology. Today things have flipped on their head(set). The technology is getting smaller and cheaper each year, while its potential applications and capabilities have expanded.

Augmented reality (AR) and virtual reality (VR) may feel like their major business impacts are still to come, with much of the public focus still on entertainment. But manufacturing companies, are already seeing benefits from implementing these technologies at all stages of their product lifecycle.

Augmented reality, which is in an earlier development stage of the two technologies, refers to the overlay of virtual elements overtop of a live picture of your surroundings. Virtual reality, on the other hand, is intended to transport the user into a completely virtual world, blocking the visual perception of their location. Both use head-mounted devices to display graphics to the wearer.

Together these industries make up the majority of the XR (Extended Reality) field, a term used to encompass the evolving area that includes AR, VR, and mixed reality. The need for the term has formed as multiple technologies in the sector have emerged and advanced. The individual buckets were becoming too limiting, and the technologies were all building off of each other.

That evolution of the XR industry has allowed the technology to be taken out of just the video games and consumer product world. While consumer headsets intended for gaming and entertainment are still a large part of the market, these same small headsets are also creating big business impacts. They’re allowing XR to trickle down into smaller and medium-sized companies, especially in manufacturing. In 2016, PricewaterhouseCoopers (PWC) predicted that more than 1 in 3 manufacturers would adopt AR or VR by 2018.

The use of XR in manufacturing is being driven by four main areas that apply throughout a product life cycle: design, worker training and safety, assembly, and maintenance. Of course, that process starts with sketching out what you would like to create.

Designing the future in virtual reality

That same PwC report that predicted an uptick in XR adoption saw that “product design is the most common application for AR and VR” in manufacturing. Manufacturers are already working with computer models and design software. Adapting those models or creating them initially in virtual reality isn’t a big leap.

Computer Aided Design (CAD) software companies are making this transition easier by creating connections to VR. For example, design software companies like Dassault Systemes, which creates SolidWorks, and AutoCAD have now developed built-in procedures for engineers to go directly from their engineering models to VR ready designs. “We saw this trend towards XR features and workflows and jumped at the opportunity to lead the way,” says SolidWorks senior product portfolio manager Brian Hillner. These new software additions mean designers don’t need to re-model data from scratch or jump through any hoops to transfer them to XR.

The use of VR and AR in design can make the design process more tangible and find product issues before a product is ever made. It adds a new layer and meaning to digital prototyping. “Imagine how much it costs to prototype a jet engine or even a bicycle? Or how about a massive brand new telescope or observatory for the Hawaiian Islands?” says Hillner. “Augmented Reality and Virtual Reality allow our customers the opportunity to explore their designs virtually with full immersion before spending a penny on physical prototyping.”

Ford Motor Company, an early adopter of VR, has used the technology in its design process since 2000. Today it has become an essential part of their visualization and review process. Ford’s designers and engineers look at more than 100,000 car details in virtual reality a year, and have reduced basic sketch times from months to days. “Just as important as the invention of the mouse for a method to capture user input, I think the VR controller will one day very soon start its reign in design and engineering,” says Hillner. “I honestly think this tech is only beginning and cannot wait to see what the next couple years bring.”

Safety training in the virtual world

Training for emergencies and dangerous situations can be difficult. The best way to prepare for a dangerous situation is to simulate that situation and face it head-on. But doing that in reality is difficult and expensive. In virtual reality it is cheaper, controlled, and repeatable. That’s why VR training has taken off in a variety of industries with big-name adopters ranging from Walmart, which has put headsets in all of its stores, to Verizon, which uses VR technology to prepare its employees for store robberies.

In manufacturing, XR is enabling factory floor workers to safely gain experience with dangerous situations in the virtual world in order to prepare them for their real-world counterparts. On top of that, putting workers through training in virtual reality can increase their efficiencies from day one on the factory floor.

“Employees in the manufacturing industry have extremely detail-oriented jobs, where procedure and efficiency are critical for both safety and productivity, and VR is a great medium to prepare workers for this type of environment,” says Kyle Jackson, CEO of Talespin, which specializes in creating VR training for the workplace. “Immersive training tools allow employers to prepare their workforce for the worst-case scenario.”

Large corporations were the first to bring VR training into the workplace. Ford also has credited virtual reality with helping bring down its production line injury rate. But Jackson says advancements on the hardware side of the equation have greatly reduced costs and improved usability and scalability from an enterprise perspective, opening it up to more companies. A report released earlier this year by SuperData estimated that enterprise businesses as a whole will save $13.5 billion in 2019 as a result of implementing XR training.

For first time VR adopters, Jackson recommends manufacturing companies start simple. “[They] should look at the low hanging fruit in terms of use cases like safety training and learning OSHA best practices, simulating shutdown procedures, and virtually recreating large equipment that can be expensive to send people to in person,” says Jackson. “Piloting VR training for a few use cases with clear ROI will help manufacturing companies justify further adoption of the technology where they can realize even greater benefits.”

AR can also create greater efficiencies on the factory floor withheads up displays that overlay instructions onto products and guide employees while they work.

Lockheed Martin has demonstrated AR’s effectiveness in its use of Microsoft Hololens AR headsets to assemble the Orion spacecraft. Head of Emerging Technologies at Lockheed Martin Shelley Peterson says they have had 30-90% reductions in touch labor since bringing AR into their process. “AR is most effective in manufacturing any time data has to be interpreted to complete a task,” says Peterson. “When building small numbers of a spacecraft, quite a bit of time is spent interpreting the work instructions and drawings. AR simplifies this, and turns the information overhead time into the speed of sight.”

Boeing has found a similar use in the assembly of wire harnesses on its planes, moving their technicians from paper guidelines and manual rulers to headset instructions.

All of this is now achieved at a relatively low cost. Peterson has said the software cost is now down to around $20,000 and decreasing quickly, with each headset priced at around $3,500. While that’s not a small stack of cash, it’s much less than the hundreds of thousands of dollars previously needed to achieve the same goals.

Money aside, bringing AR onto the manufacturing floor has become much simpler thanks to more plug-and-play software like Scope AR, which is used by Lockheed. While it originally took weeks to build the AR content required for the headsets, now it only takes Lockheed Martin a few days. “Less than a decade ago, it could take a P.h.D. in computer science several months to build an AR scenario,” says Peterson. “Now, the same type of scenario can be built by a college or high school student in a few hours.”

These software advances are allowing AR to trickle down to businesses with tighter budgets. But before diving in, Peterson recommends these companies look at why they need the technology, prioritizing savings over the “shock and awe” use cases. “I would advise manufacturers to analyze use cases carefully, and to make certain to focus on early-stage savings,” says Peterson. “Small manufacturers are often quite agile, and have an opportunity to integrate the technology without having to meet as many requirements.”

Machine maintenance is a tricky and expensive game, involving a lot of troubleshooting, deciphering issues and acquiring the manpower and tools to fix the problems.

XR provides a new solution to help speed up the problem-solving process. Technicians not only get access to all of the information they need in their AR headsets, they can also call in remote help. Instructions on how to fix a machine can be transmitted through an AR headset and overlaid over their view of the machine. Think of it as similar to having a worker from IT take over your desktop to help fix your computer. By remotely guiding someone through the repairs, valuable time can be saved and put more brainpower to work. The headsets are removing the need for paper research or going back to the office to get assistance, which can significantly decrease machine downtime.

AR headsets can also record notes and information by voice allowing employees to have both hands available for work. Mitsubishi Electric Corporation has used this technique since 2016 for manufacturing maintenance, as well as in the inspection of things like water-treatment plants.

All of these factors—design, training, assembly, and maintenance—contribute to time reductions, cost reductions, and safer working environments. While many of the first movers were big manufacturers, the technology is getting cheaper, and the benefits are now available to more businesses.

And Peterson says that having those big companies around as experts can be a big advantage to newcomers looking to invest in XR. “Find an ally who has been through the process before,” says Peterson. “Companies now exist who have employed this technology for five to ten years. See if they are willing to provide insight.” While VR and AR are still in their early stages, that doesn’t mean that they can’t bring benefits right now to businesses.