How to leverage construction technology for worker safety 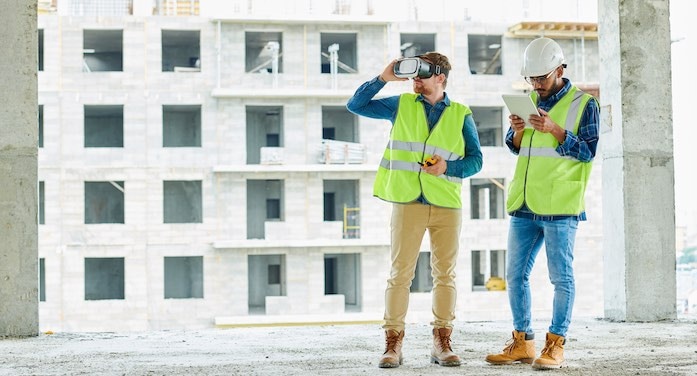 Of 4,674 worker deaths in 2017, one-fifth were in the construction industry, making it the most dangerous occupation in the nation.

Meanwhile, worker injuries and illnesses cost U.S. businesses up to $360 billion per year. Both the human value and financial repercussions of unsafe workplaces are enormous, and in the construction industry, this burden is disproportionately borne by contractors. According to the CDC, more than half of construction deaths occur in companies with less than 10 employees.

The majority of construction fatalities result from “fatal four” accidents: falls from heights, being struck by fallings objects, electrocutions, and caught-in/between. These preventable tragedies result from poor handling of these areas:

Historically, the construction industry has been behind the curve when it comes to adopting new technology. But as prices drop and emerging construction tech and digital solutions become more accessible, there is a great opportunity for mid-sized contractors to use construction tech to supplement human safety to create safer, more profitable workplaces.

The unexpected startup of machines or release of energy can pose a serious risk on construction sites. According to the Occupational Health and Safety Administration (OSHA), electrocutions and accidents in which workers were caught in or in between moving equipment account for more than 12 percent of construction fatalities.

Construction sites can contain a number of hazardous energy sources including:

By following lockout and tagout (LOTO) standards established by OSHA, contractors can guard against accidents on work sites. LOTO procedures call for energy sources to be de-energized and isolated before a worker performs maintenance or enters an otherwise hazardous area.

As per LOTO standards, hazardous energy sources should be physically locked with a key and tagged with the name and contact of the authorized worker. This creates a great deal of personal accountability for the safety of co-workers and makes it difficult to resume machine use without the proper authorization. Lockout and tagout procedures should include these six steps:

These procedures have traditionally been performed manually with physical locks and keys, but now digital technology is emerging to supplement the process.

With mobile lockout applications, authorized employees can scan barcodes on equipment and instantly reference lockout procedures and checklists from their smartphone. They can also digitally log each step of the lockout along the way and receive warnings if steps are missed.

This enables other team members and managers to view lockouts in real-time and ensure it is executed safely. In addition, virtual and augmented reality (VR/AR) can improve lockout training by providing workers the opportunity to virtually practice lockouts before they do so in the field.

Other technologies like absence of voltage testers and smart current monitoring devices are also improving the control of hazardous energy by providing a digital mechanism to check for uncontrolled electricity. Completely digital lockouts with digital keys may also be possible in the near future, drastically reducing the amount of human intervention needed in these potentially dangerous situations.

Falls and falling objects resulted in 461 construction deaths in 2017, and represent the greatest threat to worker safety.

For workers building structures at heights, the scaffolding, the position of tools, and general work environments can change day-by-day, making it difficult to identify potential hazards and safely work around them. Basic fall prevention practices include the use of safety equipment like:

Today, contractors are beginning to take advantage of a number of technologies to supplement existing safety practices for working at heights. These include emerging technology like:

Using digital models of BIM, contractors can better plan, design and construct the scaffolding for working at heights. By creating structural models that include loading specifications, stability, rigidity, and other design calculations, contractors can identify and manage safety hazards in advance.

In addition, software solutions like the Smart Estimator tool by Smart Scaffolding can automatically check digital models against government safety regulations and flag non-compliant designs for an engineer’s attention.

Although not yet common industry practice, 4D BIM can be used to generate visual models of evolving risk levels throughout construction phases. One such model was presented at the International Conference on Computing in Building and Engineering.

The model incorporated common risk factors into the BIM design to create a visual representation of different hazards as construction progressed. The model’s hazard visualizations were accompanied by risk mitigation information, providing engineers and managers with suggestions to build safety into the design. Models like these have the potential to greatly enhance project planning and safety management for working at heights at the point of design.

This data can then be fed into an artificial intelligence (AI) platform, which has the ability to recognize safety hazards without human intervention. As an AI program is “better trained,” or as it analyzes more data over time, it becomes more accurate and adept at identifying hazards.

Some construction safety applications also use image and video tagging technology to identify risks in the workplace. Skanska Construction Group, for example, uses Smartvid.io to capture and analyze live photo and video files. Smartvid’s construction-trained AI engine then tags both positive behaviors and risk indicators. By tagging risk indicators like missing personal protection equipment (PPE), obstructions on raised walkways, or unsafely placed equipment, the applications can help to reduce incident rates by up to 30 percent.

While IoT and AI harness the power of computing to enhance overall safety observation and incident prevention, wearable technology can now monitor everything from body temperature, to heart rates, respiration rates, and worker movements. This data can be used to alert workers and their managers if they are at risk of fatigue or overexerting themselves.

Other wearables are equipped with sensors that can let workers know if they are entering a restricted area with high voltage, chemicals, or other hazards. What’s more, construction AI can identify patterns in bad posture and risky maneuvers that can result in slips or falls. This data can be used to improve the organization of worksites and inform worker training.

Just like virtual reality can be used to improve lockout and tagout training, VR is also making waves for its realistic training scenarios with applications for working at heights and confined spaces. Using BIM designs, VR programs can generate 3D visuals of scaffolding, workers, falling objects, and even falling people.

Periodically exposing workers to virtual risk circumstances can have a profound impact on the level of care and caution used on actual work sites. Some construction firms are even going as far as exposing their workers to traumatic virtual accidents to instill a culture of prevention. For instance, UK scaffolding company, GKR Scaffolding, had their workers undergo a virtual simulation of a worker failing to secure a ladder and falling to his death. The simulation included an emotional phone call to inform the man’s family of his death.

While this may be an extreme example of VR for training at heights, such realistic training can undoubtedly help workers be mindful of risks and guard against complacency.

Technology improvements come with their own set of risks. It’s important to be wary of digital solutions that make dangerous, high-stakes situations too easy to manage. Digital checklists, workflows, and training should not replace physical on-site training overseen by a mentor.

Software can malfunction, be used improperly, or be the target of a cyberattack, resulting in dangerous errors.

Remember last year when the Hawaii Emergency Management Agency erroneously sent out an “incoming missile” alert due to miscommunication and confusion over the system’s user interface? Something similar could happen with lockout and tagout solutions with an operator selecting the wrong option in the interface, accidentally powering-up machines. The potential to lockout and isolate energy sources via connected machines and digital keys should not replace physical locks and keys.

Likewise, BIM and artificial intelligence applications that can identify risks and flag unsafe scaffolding designs independent of humans are not an excuse for safety managers and engineers to put their feet up. Instead, technology should serve as an extra check, and an extension of the important work engineers and safety officers are already doing.

OSHA estimates that eliminating “fatal four” accidents would save the lives of 582 construction workers in the U.S. every year. By supplementing human planning, vigilance, and training with construction tech, contractors can play their role in realizing this goal.