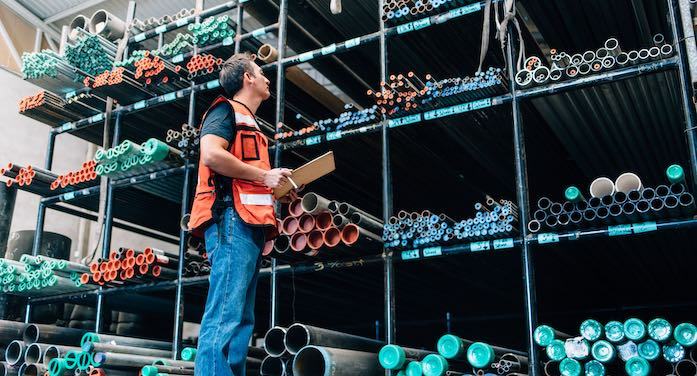 As a small business owner, you are likely always concerned about your bottom line. If you manufacture goods, you probably understand how critically the production process can impact that bottom line and requires continuous improvement.

In this article, we’ll outline everything you need to know about the just-in-time manufacturing system. After reading, you should have an idea of whether the just-in-time system is a viable production management option for your small business.

A history of just-in-time systems

In the 1980s, Harley Davidson was in deep trouble. Japanese motorcycle companies were dominating the US market with higher quality bikes at lower prices — with 30% lower operating costs than Harley’s. At first, Harley accused the Japanese of flooding the market to harm U.S. manufacturers.

With a push system, inventory is created continuously and is unresponsive to changes in demand. With their push system, Harley Davidson was overproducing inventory to meet planned shipment dates and papering over defective parts by merely making more. This meant their inventory costs were dramatically higher than those of their Japanese counterparts.

Today, lean manufacturing has become gospel for manufacturing businesses. However, you can apply these principles to your business regardless of the industry you’re in.

What is just-in-time management?

Toyota perfected this process by first reducing inventory levels and then observing where quality issues cropped up during the manufacturing process, giving employees the authority to fix problems they saw on the floor. By implementing inventory control, eliminating wasteful inventory and increasing operational efficiency, companies could manufacture on an on-demand basis.

This allowed businesses to keep inventory costs down while reducing inventory spoilage and obsolescence. With less capital invested in inventory, companies have healthier cash flows and higher margins with higher productivity.

Harley Davidson realized the benefits of just-in-time nearly 40 years ago after those trips to Japan transformed the company. They saw the benefits of:

Since then, Harley-Davidson hasn’t looked back. Their CEO, Matt Levatich, recently said, “Lean manufacturing allows us to build motorcycles closer to when they’re needed. We have the flexibility to quickly adjust the mix of products to match retail trends—including product mix and timing of product to market. This is all about producing the right motorcycle for the right customer at the right time.”

Let’s take a closer look at how the system works in the workplace.

If you’re wondering if lean inventory management is right for your business, there are a few reasons the method would appeal to businesses:

Just-in-time manufacturing is most commonly implemented by manufacturers looking to lower costs and increase operational efficiency.

Toyota developed and perfected lean manufacturing principles in Japan before it spread to U.S. automakers in the 1980s. It’s also used by companies whose inventory is largely perishable goods, like grocery stores. Dropshipping businesses, which are popular today, are only possible because of just-in-time manufacturing.

Just-in-time manufacturing has a sister philosophy called just-in-case inventory (JIC). With JIC inventory, businesses store large stocks to hedge against the risk of stockouts, uncertain demand and difficult to acquire items. This helps prevent back orders, stockouts and keeps customers happy, which allows for high service levels and as well as increased revenues.

For example, in October 1998, Dole Food Company lost 70% percent of its acreage in Central America due to Hurricane Mitch. They had no just-in-case inventory strategy in place and lost over $100 million due to supply interruptions.

One of Dole’s competitors, Chiquita Brands, also had similar supply interruptions in Central America. Still, they were able to meet demand by increasing productivity in other locations and purchasing inventory from other producers in the region — their revenue grew by 4% in the fourth quarter of 1998.

Just-in-case inventory has its downsides, though, with high inventory costs that can eat into profits, as well as increased spoilage and obsolescence of inventory. Businesses that depend on scarce raw materials or natural resources, like minerals or agriculture, benefit from JIC inventory as well as retail companies that rely on seasonal sales periods.

For most businesses, the vast majority of their capital is invested in inventory. With just-in-time manufacturing, owners can reduce costs by having less inventory on hand. This means having more cash to spend in other areas of the business and higher profit at the end of the year.

By only creating inventory when orders are placed, manufacturers have lower storage and carrying costs. Labor and operations costs drop as well because the factory isn’t manufacturing products just to store them on shelves. With increased efficiency, there’s less waste and spoiled inventory.

The downside of just-in-time

Running lean sounds excellent in theory, but there are trade-offs when it comes to implementing a just-in-time strategy. With less inventory on hand, you run the risk of increased stockouts, which means lost sales and unhappy customers. For manufacturers, this can mean production shutdowns and delays.

If you run lean, you are also more dependent on your vendors and suppliers because your supply chain is less robust. And if a business goes through high demand seasonal periods, there’s a greater possibility for backorders and lost sales. Any problems with new orders or shipping can cause much bigger problems than if you were running on JIC inventory management.

If you are considering implementing just-in-time production efforts into your small business, you’ll want to look into Kanban, a Japanese “workflow management method designed to help you visualize your work, maximize your efficiency, and be agile.”

Taiichi Ohno developed the system to help improve continuous-flow manufacturing. Kanban analyzes the entire production process, highlighting problem areas in terms of both lead and cycle times. This, in turn, allows management to identify the maximum levels of their work-in-process inventory.

One important thing to note about Kanban — it’s not a substitute for a just-in-time manufacturing program. It’s merely one element of the just-in-time program. Too often, people will use just-in-time and Kanban synonymously or perhaps confused the two, thinking they’re different programs.

Remember, Kanban is one part of just-in-time manufacturing. But, it does not exist as a standalone production method system.

Is just-in-time manufacturing right for you?

After the dot-com bubble burst in 2000, Cisco had to write off $2.25 billion in inventory, partly due to poor inventory management. While an extreme example, a U.S. Bank study found that 82% of business failures can be attributed to poor cash management, most of which is tied up in inventory.

Implementing a just-in-time system could be beneficial. Just remember that the changeover isn’t something to take lightly. The setup times associated with Just-in-time manufacturing can be lengthy but completely worthwhile if you’re a company with a fluctuating inventory.

Perhaps the best thing to remember, as is the case with any business decision, is you need to thoroughly consider the process.

It helps to use the best tools to analyze your inventory to make informed decisions for your business. Managing inventory shouldn’t hold your business back from growth. Take control of your business’s bottom line.