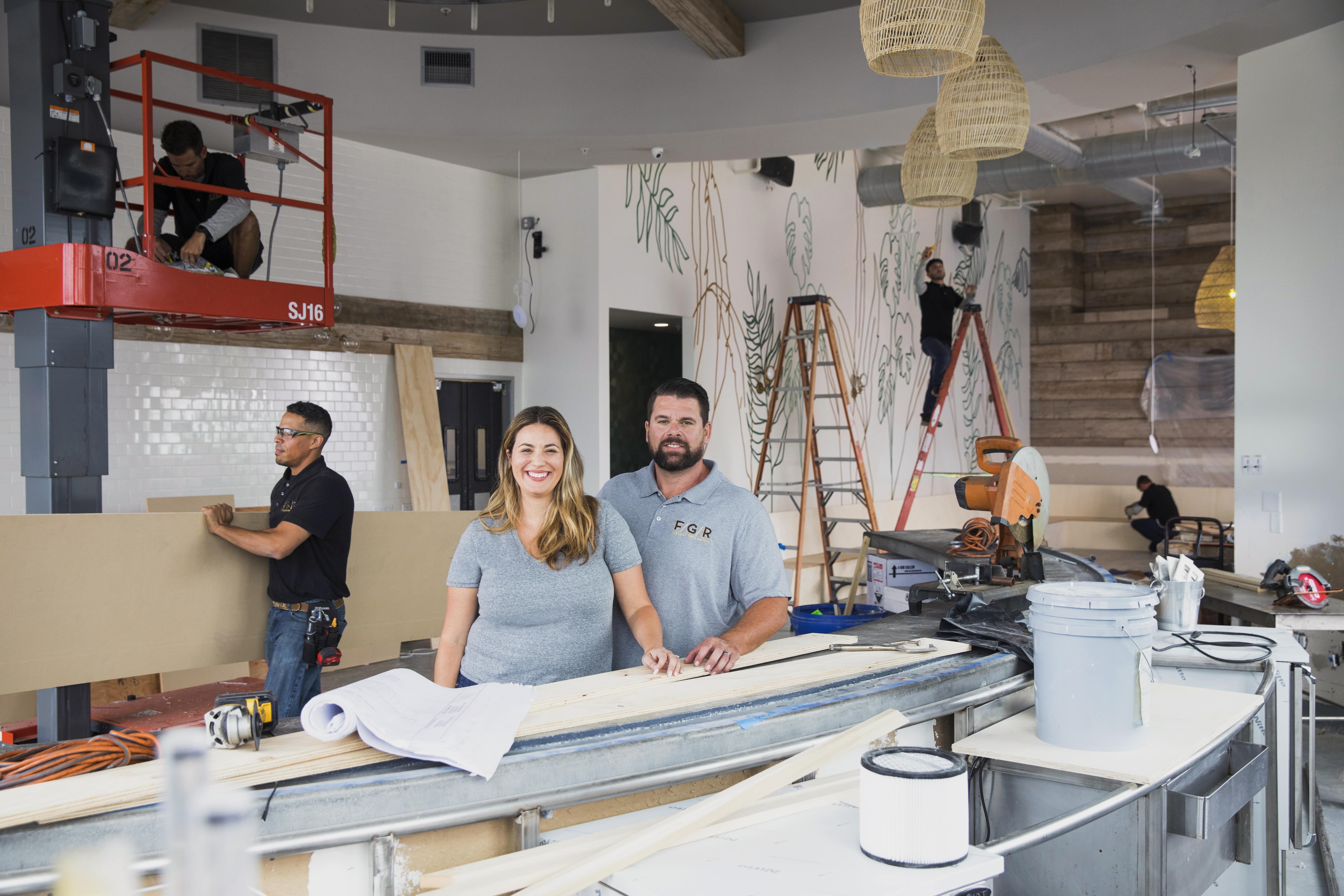 Brian Dorsey grew up in the house his father built, so the construction trade had always been a part of his life.

For years, Brian worked in the restaurant industry as the co-owner and operator of a popular bar in Anaheim with his brother. But he returned to his construction roots when he spotted an opportunity in a restaurant demo job that went awry.

A contractor for one of his restaurant contacts bailed out at the last minute, giving him an opportunity to do a demo job with his brother and a few laborers. They cleaned out the space and polished the floor on the way out, an extra touch that delighted the new client and won them the contract to be their new demolition and cleanout team.

This process repeated itself over and over, winning them more and more contracts through referrals. “We haven’t had to do a ton of advertising, even today,” Brian comments. Today, Brian and his team does fixtures, fabrication, and design work for retail spaces all over the country.

How a creative partnership led to new avenues for growth

For the first four years, Fixture Guys didn’t hire any employees. By doing 95% of the work himself, Brian was able to retain profits. But this also meant that he spent the first year living almost entirely on the road as he traveled between jobs.

In 2012, the business had grown so much he realized he needed some help. “I couldn’t be in two places at once and I didn’t want to say no to work,” says Brian. That help soon included his wife Jaime, his girlfriend at the time, who started doing account management and design for the company.

In 2017, just five years later, Fixture Guys’ annual growth was 100%. Previously, they grew about 50% year-over-year. This was in part thanks to Jaime, who freed up day-to-day operations so that Brian had more time to manage projects and attract new customers.

Another reason behind the company’s growth was expanding the services it offered to clients. “Instead of just preparing and building fixtures in the store that are already made, we started designing and manufacturing furnishings inside the store,” says Jaime. “We saw an opportunity to expand and it was ripe for [Brian] to pitch those ideas to our clients.”

With all this growth, they needed to upgrade their business management software. As Jaime explains, “We needed something that was going to grow with the business and the previous software we used was very limited in what it could do.”

Jaime recounts the first time she encountered QuickBooks while running her own restaurant: “Somebody downloaded a version [of QuickBooks] onto a disc for me. So I installed it on my computer and started playing around with it. I thought, ‘Oh, I can use this.’ Being a wordsmith and not a mathematician, it was easy for me to understand.”

Jaime’s previous experience made her think of QuickBooks for Fixture Guys. “It’s the easiest software that I’ve found,” she explains.

After integrating QuickBooks Online Advanced into their operations, Fixture Guys now use it for invoicing, payroll, estimates, and reconciliation. Time tracking is done through TSheets. Jaime and Brian are the only two employees using QuickBooks in the office and they have an accountant who checks in remotely every month.

QuickBooks’ cloud-based platform allows for easy collaboration among their handful of employees that are on the road at any given time. Having comprehensive business management software to do accounting, payroll, and time-tracking enables their team to efficiently complete projects on time and on budget.

Jaime set up QuickBooks herself without any help and rates its ease-of-use a nine out of ten: “It took me a minute to figure out how to sort alphabetically and by date. When I figured it out I thought, ‘Oh, my god, life just got easier.’” As the business grows, Fixture Guys are planning to grow into new QuickBooks Online Advanced features like Revenue Streams trend line reports.

The secret sauce behind their organic growth

Brian adds, “What we do isn’t rocket science. The thing that set us apart from the beginning was just delivering.” In an industry where overpromising and under-delivering is common, Fixture Guys’ quality, on-time delivery went a long way in helping them gain those first important contracts.

Their minimal overhead also allowed them to come in under budget and compete with anyone. Even while they were rapidly growing, they always found a way to deliver and take on each challenge. “We don’t believe in saying, ‘I can’t’ or ‘no,’ we find a way. For any entrepreneur, that’s what they should always keep in mind,” Jaime says. “That’s been our driving force, and I think that’s what really sets us apart.”

This article currently has 6 ratings with an average of 2.7 stars