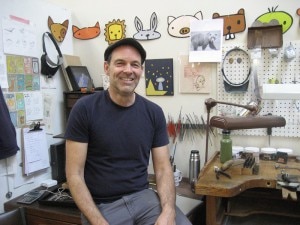 For the past 20 years, Poulin (pictured) has been selling enamel jewelry featuring whimsical depictions of animals, aliens, and more. About 60 percent of his sales are to wholesale buyers, but his retail business is growing, thanks largely to e-commerce.

“Every year, retail gets bigger and bigger,” says Poulin, who operates three Etsy stores and Markpoulin.com. He opened his first Etsy store, Marmar, in 2007 and launched his website the following year.

“I’m a power Etsy seller,” says Poulin, who has sold more than 11,000 pieces on the site. His primary store, Marmar, ranks among the top 200 shops in Etsy’s handmade jewelry category, according to Craftcount.com.

Poulin says he misses the days when “there was a much bigger ratio of buyers to sellers”; he could post a new item and get 50 views within an hour. Etsy has grown so large that a new item may not get any views its first day. Poulin’s designs have to compete in searches that can return tens of thousands of results.

His Secrets to Etsy Success

To make sure his products appear near the top of search results, Poulin buys Etsy keyword-search ads. “It has to be a really relevant keyword,” he says. “I spend a lot of time looking at the analytics of my shop.” He tracks keywords to see which ones lead to the most sales, and “I look at my competitors to see what keywords they are using.”

Using photographs that look great as thumbnails is crucial, he says, because most shoppers view Etsy from mobile devices. He created a special light box for photographing his wares and spends about four hours a week on photography. “If something’s not selling, I reshoot it,” he says.

Positive customer ratings are also important to Etsy success. “I’m like Zappos,” Poulin says, noting that he tries to make every customer happy. “I want their buying experience to be good because I have so many repeat customers.”

When asked what he likes about selling on Etsy, Poulin says, “I like everything about it.”

He enjoys being part of the Etsy community, not just as a seller but as a buyer. “I love shopping online,” he says. “I get excited seeing what other people are making.” He pins his favorite items to Pinterest and interacts with Etsy users, who add his work to their treasuries.

“It’s all about engagement,” he says. “Engage, engage, engage. I really love what I do, and that comes across.”