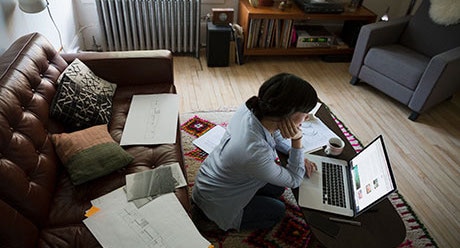 Survey reveals that making your life your work doesn’t always lead to more balance. In a recent study by QuickBooks Self-Employed, 500 self-employed individuals revealed the good and bad related to being their own boss. While many entrepreneurs often look to self-employment as a way to gain more flexibility for personal and work-related tasks, the truth might be a bit more stark than they initially thought.
In the online survey, QuickBooks Self-Employed asked respondents questions regarding the realities of being self-employed. These questions included hours worked per week, how often social events have been missed and what self-employed workers consider their biggest struggle. Perhaps not surprisingly, personal sacrifices, like vacation time, sick days and family events were the first things to go for many entrepreneurs. Everybody’s Working on the Weekend Aside from working on the weekend – or perhaps because of it – many self-employed workers state that they have had to miss family events or social engagements because of work. The good news is that 22.2 percent of respondents say they only miss out a few times a year. The bad news is a very close 19.4 percent reported they miss out every week. In addition, 18 percent say they miss out every other month, 16.4 percent once a month, 7.2 percent once every 2 months and 16.8 percent say they never miss an event.

It appears that being self-employed not only requires personal sacrifices, but a very understanding group of family and friends. The most common event to miss is a friend’s birthday (49.76 percent), followed by a spouse/partner’s birthday (38.22 percent), and a child’s birthday (37.50 percent). For more once-in-a-lifetime events, the attendance numbers are a bit better: only a little under 30 percent of respondents said they’ve missed out on a wedding due to work, while 34.86 percent and 33.65 percent have missed a reunion or vacation, respectively. Over 6 percent of respondents deserve a gold star – they report to not missing any of these events due to work.

Rest and Relaxation are hard to come by

Perhaps one of the biggest sacrifices that self-employed individuals make is to their own health and wellness. When asked if work keeps them up at night, 23.4 percent stated often or several times per week. This was followed by rarely at 17 percent, once a month at 16.8 percent, regularly at 16.6 percent, always (every night) at 13.2 percent and never at 13 percent. So, it would appear that if you’re a freelancer you can expect a few fitful nights of sleep at least.

However, vacation appears to be a priority for many entrepreneurs. Over 31 percent (31.8) of respondents stated they take a vacation once a year and more than a quarter (25.51%) said they only work occasionally while on vacation. As part of its survey, QuickBooks Self-Employed wanted to get a general picture of the average demographics for current freelancers. Here’s what they found:

Of their worries and concerns, self-employed workers rate cash flow problems (24.37%) and uncertainty about the future (20.08%) as their biggest pain points. Coming in third is getting paid on time (15.69%), followed by finding or retaining new clients (15.17%), understanding self-employed tax deductions (10.36%), and making sure they are compliant with any regulations (8.37%). However, closing time is more spread out. Forty percent of respondents said they manage to stop working between 4 P.M. and 6 P.M. every night, but another 38 percent state they may work all the way up until 11 P.M. before calling it quits.

On average, what time do you stop working? Overall, this study demonstrated that freelancers see value in having control over their schedule and while sacrifices are necessary, it’s not as dire as perhaps some outsiders would assume. It’s still possible to be your own boss, get enough sleep at night and take a vacation about once a year. Plus the flexibility that comes with working from home has its advantages.

QuickBooks Self-Employed surveyed 500 self-employed people throughout the US in May 2018. The sample was selected by Pollfish. QuickBooks Self-Employed welcomes the re-use of this data under the terms of the Creative Commons Attribution License 4.0, which permits unrestricted use, distribution, and reproduction in any medium, provided the original source is cited with attribution to http://quickbooks.intuit.com/self-employed/