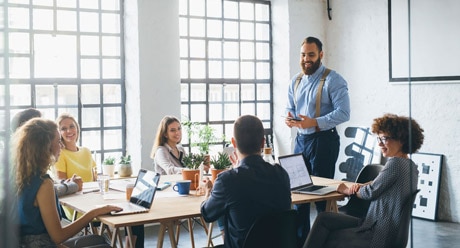 It’s possible some of these employees are interested in leaving their current position because they view their role as entry-level and think the only way they can move up is to move out.One in 5 respondents has been at their job for less than one year, and 42% reported being with their company two years or fewer.

The good news for small business owners, according to the Pay and Benefits Report, is that 48% of employees say they are fairly paid for the work they do.

Almost exactly the same number said they were underpaid. But regardless of whether workers feel they receive adequate compensation for their labors, 65% said their pay has not kept pace with the cost of living.

After all, it’s not the business’s fault if housing prices are going up faster than the appropriate pay rate for employees. That said, if an employee thinks the only way they can earn enough to support the lifestyle they want is to move jobs, their employer can’t expect them to stick around long-term. And that turnover comes at a high cost—from 1.2–2% of an employee’s annual salary to tens of thousands of dollars, according to industry analyst John Bersin.

One thing you can do is offer employees compensation in the manner that’s most desirable to them.

This suggests that on a whole, employees prefer salaried positions to hourly. Before you resign yourself to losing valuable employees for good, consider the pros and cons of offering them a yearly salary at a slightly higher level than they’re making now as an hourly employee, and reap the rewards of increased retention.

There’s a lot to be learned from looking at compensation trends.

More than 14% of employees currently receive a salary plus a bonus, where only 9.6% say they had both of these in their previous position. The percentage of hourly employees who now receive a bonus also went up this year.

This suggests small businesses are increasingly using bonuses to reward their employees.

And speaking of bonuses, 23% of employees say they are eligible for a bonus this year, compared to 16% last year, though not all would count that as a positive.

When asked if their employer ever used bonuses to keep base pay low, 27.5% of those surveyed said yes.

Other reasons employers might give for keeping base pay low?

Over a quarter (30%) of employees said their employer used benefits to justify lower wages, while 36.7% said the low cost of living in their area was a contributing factor.

Employees who said they were underpaid were subsequently asked why they felt that was the case. These were the top three reasons given:

74% of small business workers got a raise this year

While some employees said they were being underpaid because their expertise wasn’t properly recognized or appreciated, the good news is many more employees are actually being rewarded for their contributions.

Of those respondents who had been in their current position for over a year, 74% said they received a raise. While the largest group of survey respondents (28.5%) reported a pay raise of 3%–5%, many received much more, so the average across all respondents was actually 9.3%.

In contrast, 22% of workers said they are receiving the same compensation this year as last year, and more than 1 in 10 said they haven’t received a raise for five years or more.

Considering 15% of employees had a raise of 6%–10% this year, it may be time to take a look at those workers who haven’t had a raise in a while. Consider the value they bring to the table. Can you afford to lose them, based not only on their financial contributions but their soft skills, including leadership, positivity, and reliability?

As you evaluate your workforce and determine which employees are most deserving of a raise this year, be sure to consider those who are less likely to speak up for themselves.

When asked if they felt confident asking for a pay raise, 41% of workers said no. Perhaps consistent with other findings, as a whole, women were less confident about asking for a raise (48% compared to 33% of men). Unfortunately, when asked whether they were fairly compensated, slightly more women than men also said they were underpaid (49% versus 45%).

Comparing answers in the Pay and Benefits Report for why they felt they were underpaid, the top response for women was their experience wasn’t properly recognized or rewarded.

Men were most likely to say their employer deliberately keeps wages low. Interestingly, women were less likely than men to name discrimination as a reason they were underpaid.

Incentivizing employees with raises and bonuses is all well and good for those who can afford it, but for employers who are strapped for cash, the thought of bumping up every member of the team by 9.3% may be laughable.

Fortunately, some of the most highly motivating incentives are also the most cost-effective.

Based on the QuickBooks Payroll survey results, employees say a flexible work schedule is the highest valued benefit. It is also the most common.

And yet, just 18% of respondents said they get it now, and of those who didn’t, 76% said they want it. But what does a flexible work schedule look like?

For many, it’s the ability to come in early or stay late, so employees don’t have to spend valuable paid time off every time they have a dentist appointment or a parent-teacher conference.

It could also be a schedule built around the times they’re most productive—a potential win for those who’ve felt the productivity burnout that often hits just after lunch.

Remember that study that revealed millennials now make up the largest portion of workers in the U.S.? According to Bentley University, 77% of them also believe flexible work hours would make them more productive at work.

But getting a flexible schedule isn’t the only non-monetary incentive employees value. Recognition in the form of awards or prizes was desirable to 63% of employees, followed by the option to work from home (57%).

Employers looking at implementing a financial incentive might be struggling with the details.

How do employees prefer to receive such incentives? No. 1 was the performance-based annual raise, followed by the discretionary bonuses and profit sharing.

According to survey data, gainsharing (or rewards for cost-savings) was the least common incentive and one of the least valued. Only 3% of employees get it now, and only 46% said this would or does motivate them.

Equity/stock options were also seen as less desirable. Just 5% of respondents said they get these now, and of those who don’t get them, 46% said they want to receive equity or stock.

Many workers would give up benefits for a raise

Many small businesses struggle to give fundamental benefits like health care and a week of paid time off (PTO).

The good news, according to the survey results, is the majority of small business workers (55%) would accept a job with no benefits, and 61% would be willing to give up benefits for a base pay raise instead.

Healthcare is by far the most desirable benefit among the respondents, followed by a flexible work schedule, dental care, and a retirement savings plan. Less important were benefits like childcare support, spousal benefits, and career development.

PTO received a surprisingly low level of support, as just 34% of respondents said it was important to them. Sick leave scored higher, with 46% saying it was an important benefit.

These results are consistent with previous findings that showed employees often don’t take all the accrued time off they’re allotted for the year. In fact, 1 in 3 has said they felt pressured to not take the time off they’ve been given.

Only 11% of employees reported never going to work when they’re sick, and only 40% said they’d never worked while on vacation. This behavior is consistent with high levels of stress, with some employees describing their stress levels as “unhealthy.”

As for what benefits employees are most likely to find as they consider switching jobs, healthcare and flexible work schedules are the most widely available, while childcare was the least common.

Given the fact workers clearly value flexible work schedules—potentially even more than a pay bump when it comes to motivating them to work harder—this is certainly an area employers should examine more closely.

It could be the key to unlocking a new level of employee potential and retention.

More than half of small business employees are nonexempt

Let’s face it: Overtime is complicated. Tracking it, calculating it—no wonder businesses wind up paying out millions of dollars each year in FLSA overtime violations.

But while giant corporations might be able to afford multi-million dollar settlements, small businesses don’t have that kind of cash on hand.

And that can be dangerous. While 56% of workers said they’re eligible for overtime (nonexempt), 25% said their employer refuses to pay it. If they’re correct, that means 1 in 4 nonexempt employees is potentially being denied overtime. This is the most common cause of Fair Labor Standards Act (FLSA) lawsuits.

And that’s not all. Out of the remaining 44% who said they are not eligible for overtime, 16% said they have been wrongly classified as exempt and should, in fact, be eligible. This means 1 in 6 exempt employees is possibly being denied overtime.

All told, the study found 209 respondents (138 nonexempt and 71 exempt) indicated they were being denied overtime pay.

If true, that means 33% of employees who are or believe they should be nonexempt are potentially being underpaid. That’s a huge problem not only for small business owners but also their employees, considering nearly half (47%) of employees who receive overtime pay said they were somewhat or totally reliant on the additional income.

This is a major issue for employers, as failing to calculate overtime correctly can result in both federal and state lawsuits, via the Department of Labor or those filed privately by attorneys. But calculating overtime and knowing which employees should or shouldn’t be included is tough. And not just for Californians.

There are also some great resources online that may help you get an idea of the complexity of your local laws.

After years of grief and struggle, employers and employees alike are finally enjoying the fruits of a healthy economy. For employers, those fruits come in the form of climbing profits and positive ROI. For employees, it’s the opportunity to reach for a better paycheck and benefits that suit their needs.

This 2018 report reveals that employers who want the best of the best employees don’t just need to put their money where their mouth is.

They can be wise about their spending decisions. Not all benefits or incentive programs are desired equally. And some, like flexible work schedules, are very affordable.

Furthermore, if employers want to stay ahead of the curve, they need to anticipate their employees’ wants. Rather than waiting for an employee to speak up and ask for a raise or a bonus, employers may want to implement yearly, bi-yearly, or even quarterly assessments, so even those less vocal workers can get the compensation that keeps them motivated and discourages them from looking elsewhere. After all, it’s not just the more vocal employees you can’t afford to lose, especially now, when skills are in high demand.

Perhaps the most important takeaway of any survey, however, is not letting individuals get lost behind the average.

Have those frank conversations with your employees.

Ask them what benefits they want, what incentives motivate them best, and whether they’d like that year-end bonus in cash or in an investment plan that could earn interest over time.

The answer might surprise you, and the gift in return could be a loyal employee for life